Last month's post by Alan Hardiman C'68 entitled CCHS Bands of the Late 60’s has elicited further recollections from our Alumni. So here are more CCHS Bands from the 50's, 60's & 80's. 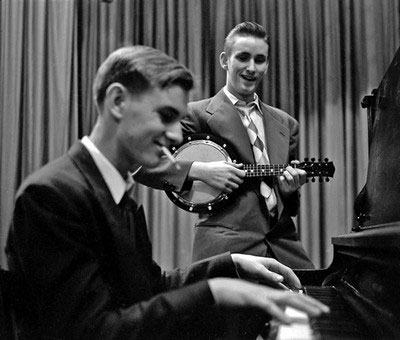 Jeff Brown C'54 at the keyboard and the late Bob Deegan C'54
playing the ukulele made easy-listening music
and appear here as part of the 1953 Christmas concert. (A. Little) 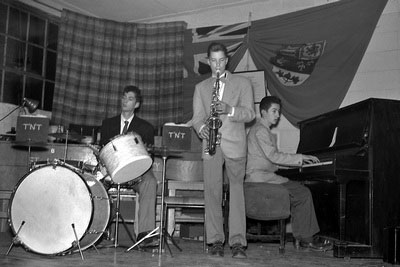 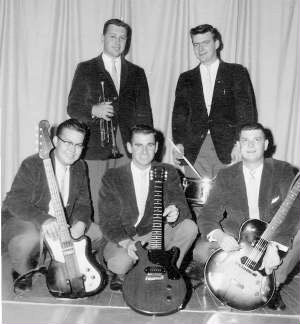 The secret of the Scimitars / Pentagons' success was their versatility. The group had many sides, being equally at home playing the latest rock tunes, jazz standards or Latin American favourites. They could also, with the aid of Bill Welburn's trombone, grind out some great Dixieland. Another difference between the group and other bands of the day, was that they had no predetermined sets. They quickly "got a read" on what the audience wanted to hear and went with that. This enabled them to please almost any type of crowd. They played weekends in the Laurentians and evenings in the city of Montreal and at clubs on the South Shore.

Our group, the Scimitars, played a couple of times at CCHS in the late 50s and early 60's. For more information on the band go to Scimitars. - Bill Welburn C'57 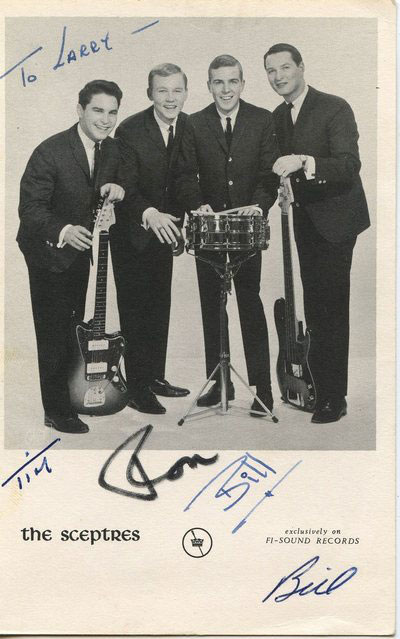 I found the last news letter very interesting especially the part on the Twilight cafe. Our band played at the cafe twice .Our band was called the Obscene. We played with Peter Kerr's band one night when the stage was at the far end and a second time by ourselves on the stage at the front door. The band consisted of myself playing rythm guiter and vocals, Bruce Hubbart on drums, Jim MacCarthy on bass guitar and Gord Maclaren who did not go to CCHS playing lead guitar and vocals.We would have played songs such as GLORIA by the Shadow of night MISTER YOUR A BETTER MAN THAN I by THE YARD BIRDS etc. We mainly played in the Laurentians doing High school dances, Morin Heights in Lachute amongst others. We never did play at CCHS. Sorry to say we have no pictures of the band but I sure have good memories of all those good times at the Cafe and the youth center dances There were many good groups to see, The Rabble, The Monks, The Roadrunners and many more. Watson Anderson - Member C'67