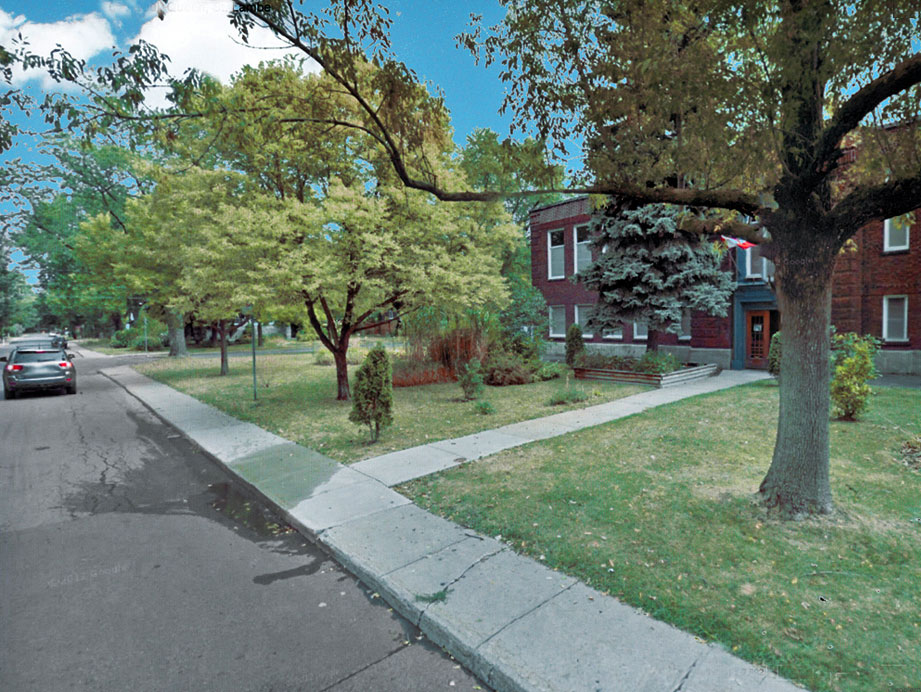 During the 1940’s Victoria Park School located on Third Street (now Blvd. Queen) went from grade one to grade four before students moved on to St. Lambert High (and Elementary) for grade five and on. It was only two classrooms during that time as grade 1-2 shared a room, while 3-4 shared the other. Both classrooms were on the second floor while the ground level floor had two separarte rooms used for gym etc. During my last year attending Victoria Park my grade four teacher was Doreen Field, Bruce Field's sister. The area behind the school was empty except for a baseball diamond at the top of Union Blvd. where we used to go and play baseball after school.

Victoria Park was a sister school to Margaret Pendleberry and it would be interesting to compare these schools to-day.
(Photo suggestion and comments provided by Jane (Strange) Fisher C-‘54.) 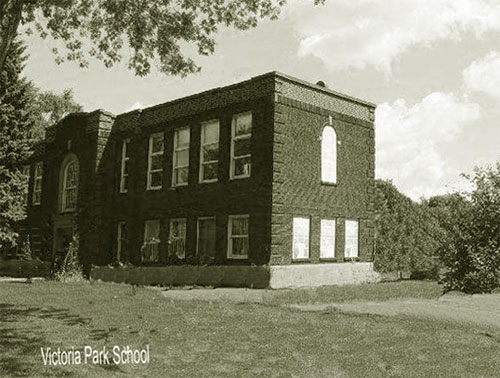 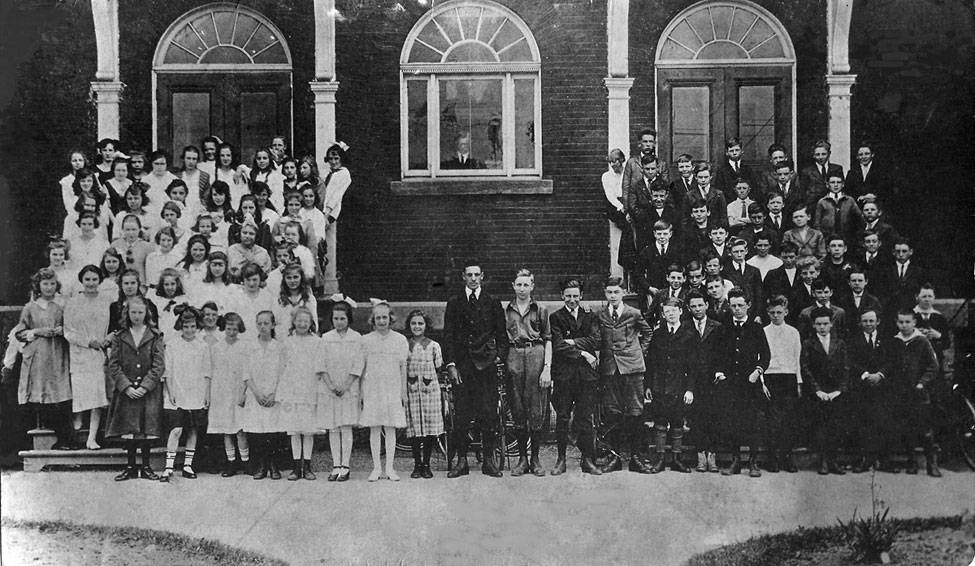 The St. Lambert Elementary School was built in 1896, and sufficed until the early 1920's when expansion of the Elementary School and the construction of two neighbourhood primary schools on each side of the town became a necessity. The Anglophone population of St. Lambert had increased from about 600 in 1891 to 2,425 in 1921 and then 4.039 in 1931.

Sent to us by Norman Craig C-'57, this photo came with the following notes: “My wife and I are reasonably certain that the boy with the white shirt and no jacket in the front row is my father-in-law, George Langston, and assuming that he is about 13 years old in the photo, it would have been taken in 1918-1919. Maybe one of the alumni readers could shed more light or possibly identify some of the others.” Notice the 'breeks' and 'lace-up boots' on the guys. 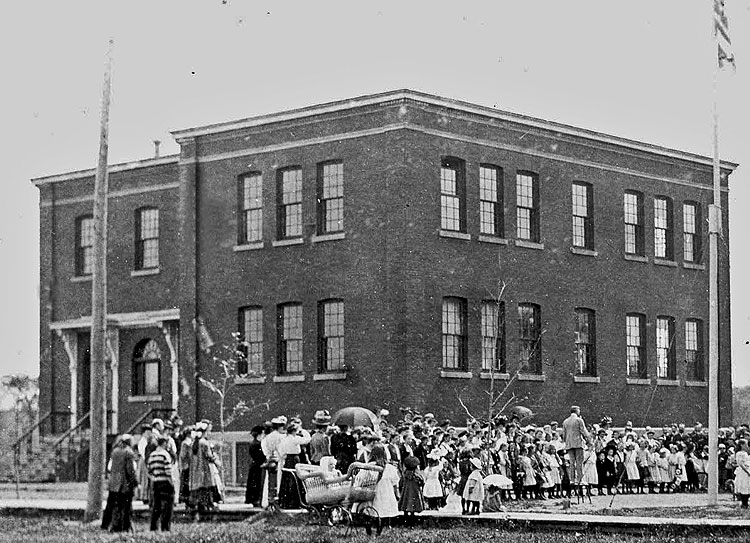 St. Lambert High was often the scene of political rallies and instead of soapboxes, speakers used chairs (so they could either be seen and heard better or to make them feel superior, looking down on their audience). 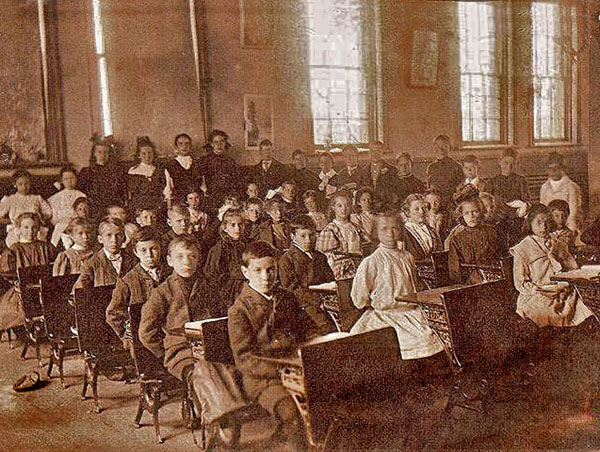 Unidentified schoolroom with the telltale windows of SLH 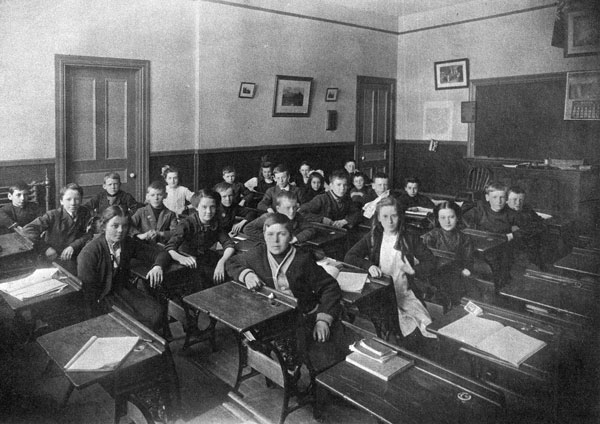 Earlier elementary grade class at the turn of the century. 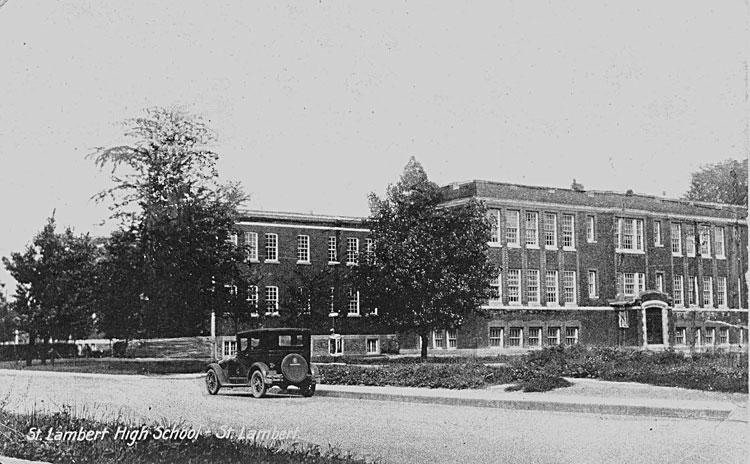 SLH in 1941 when trees were beginning to appear along with campus floral gardens. 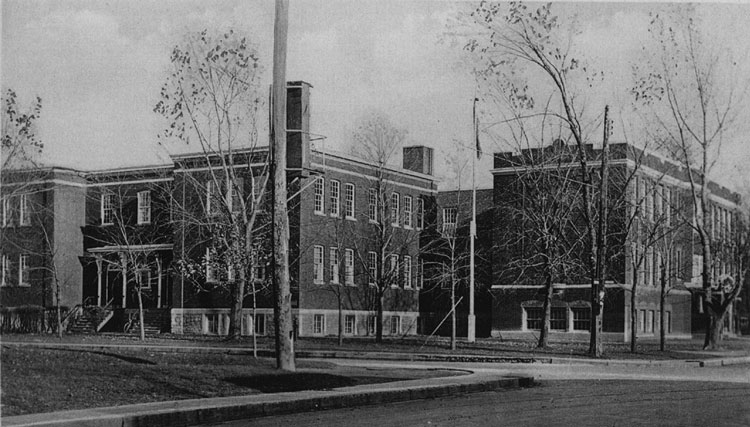 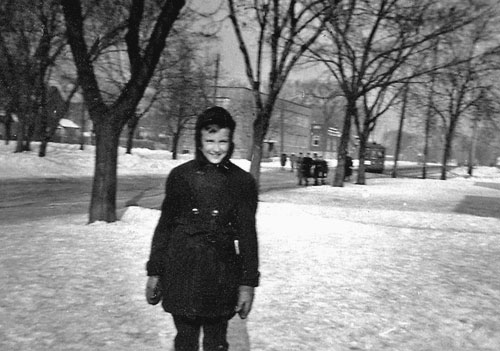 Grade V student (1948) in front of SLH with the school annex in the background.
The M&SC streetcar is about to turn up Mercille Ave 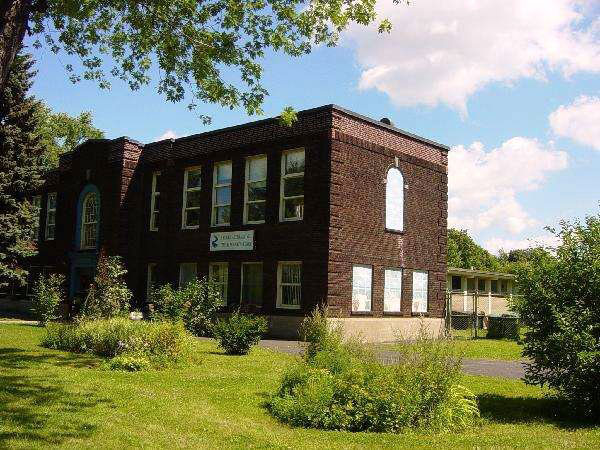 While surrounding municipalities had new schools built to accommodate population growth, Victoria Park School like all others in St. Lambert were expanded with add-on units. (J.Anderson) 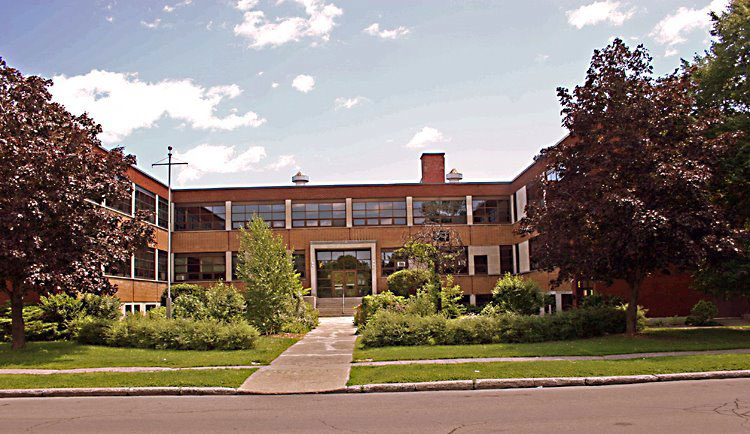 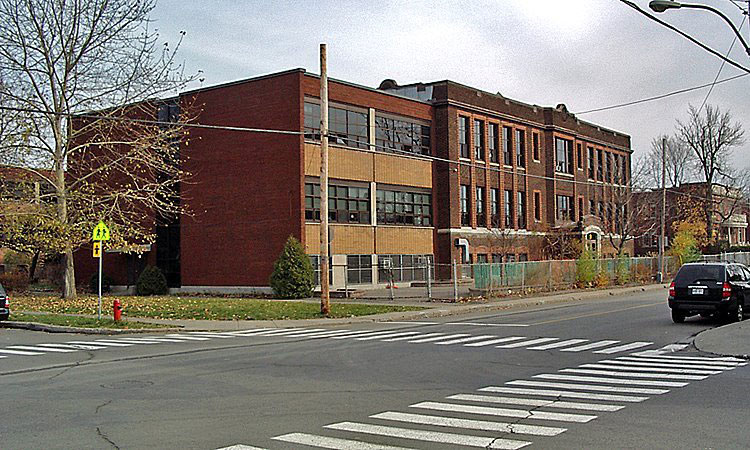 Side view is the typical angle used in most "Old School" photos. The combination of the 'new' and 'old sections' becomes evident. (H.Carter) 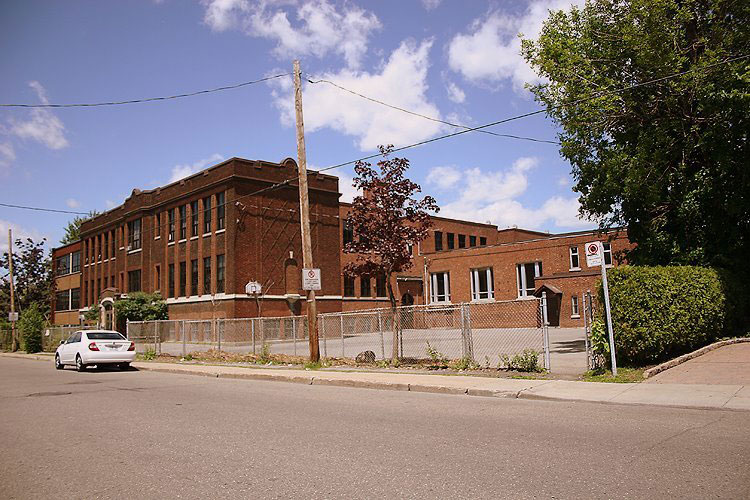 Rear view from Notre Dame Ave. shows part of the gymnasium. Wonder if the fence is to protect the property or to keep kids on campus. (D.Syme) 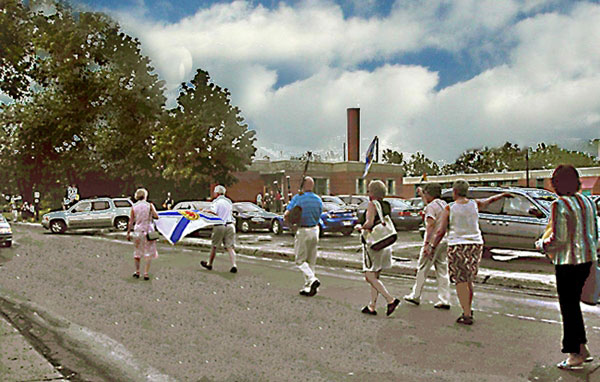 Heading down Green St. toward the new C.C.H.S. is a contingent from the Maritimes led by a bagpiper 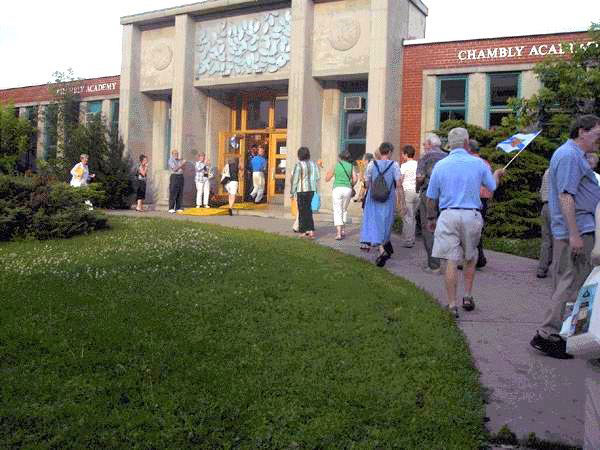 Heading toward the front entrance. 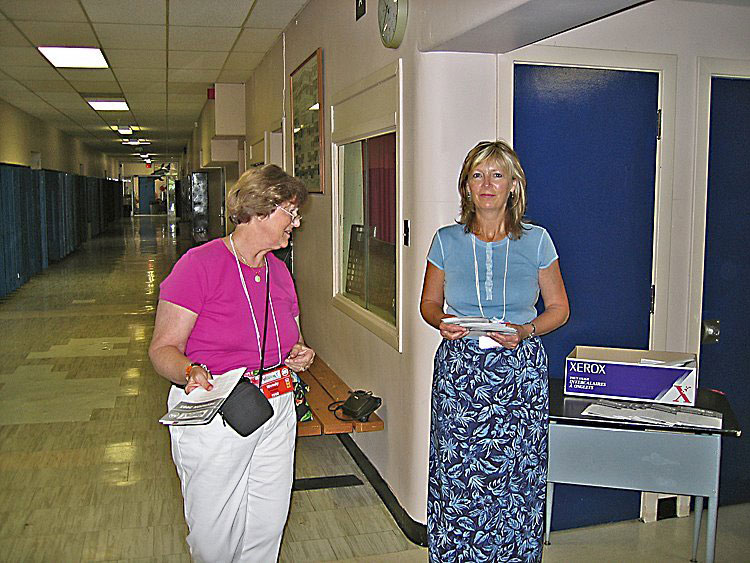 Outside the entrance to the gymnasium, looking down the Grade XI hallway. (M.Lawrence) 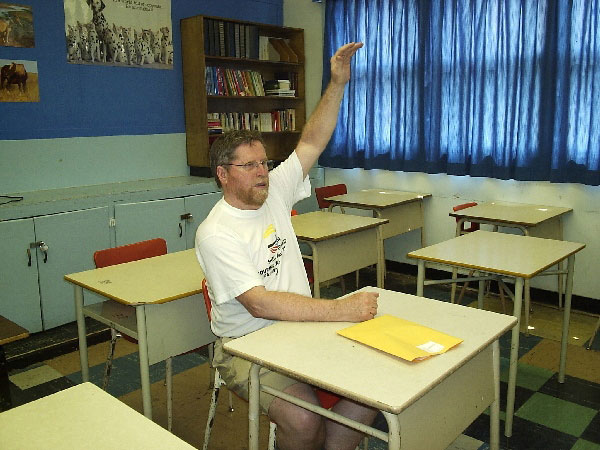 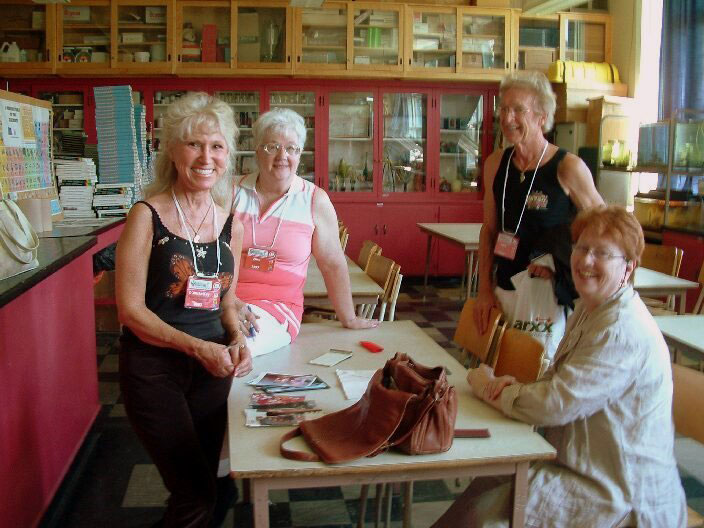 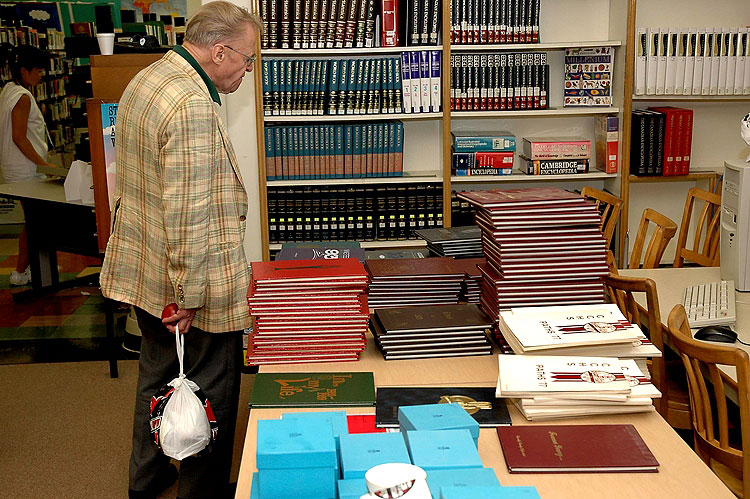 The school library which has a critical shortage of reading materials.
Alumni contributions are usually directed to correcting this problem. (P.Peets) 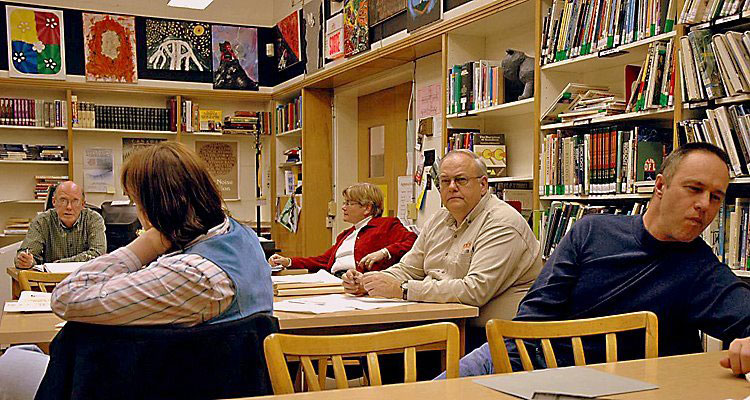 Board Members meet in the school library. (P.Peets) 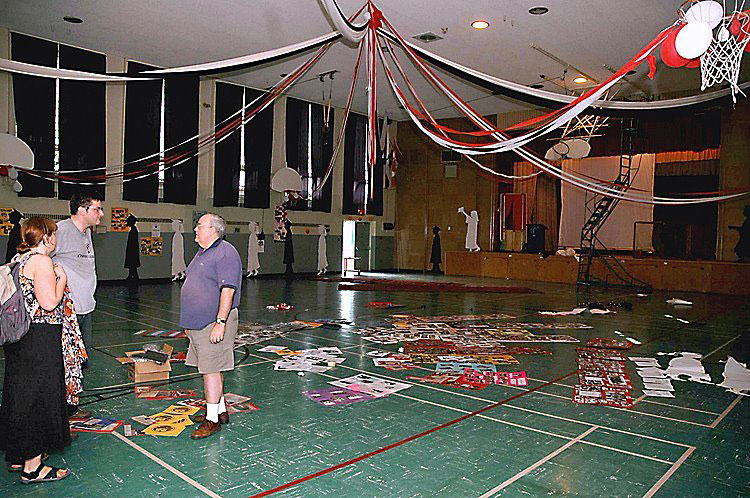 Gymnasium being decorated in preparation for Reunion 2005. (P.Peets)