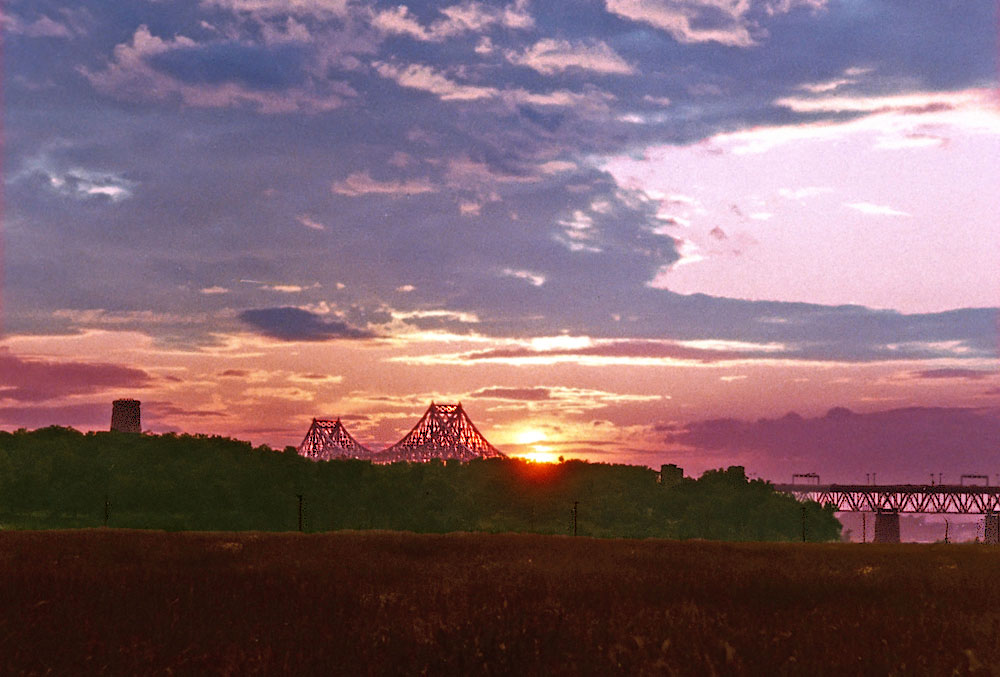 When our second child arrived in 1962 and space was limited in our NDG apartment, we decided to move to St. Lambert. We rented one of the row houses on Sanford Avenue, just up the street from Riverside Drive. It was only a couple of blocks from the home where I was raised on Merton Avenue. During my time on Merton (1944-54) we used to bike across the Jacques Cartier to the St. Helen's Island in summer and ski there in the winter. The view of St. Helen's Island and the Jacques Cartier Bridge then took in a vast expanse of open water - the St. Lawrence River. Times Changed and the St. Lawrence Seaway opened in 1959. By 1962 I looked out on a different view - an area of barren land that would later become a park. Names of some of the alumni who lived in those row houses over the years - Lloyd and Trevor Fear, Lorna King, Bev Kilbourne. (Andrew Little - C'53) 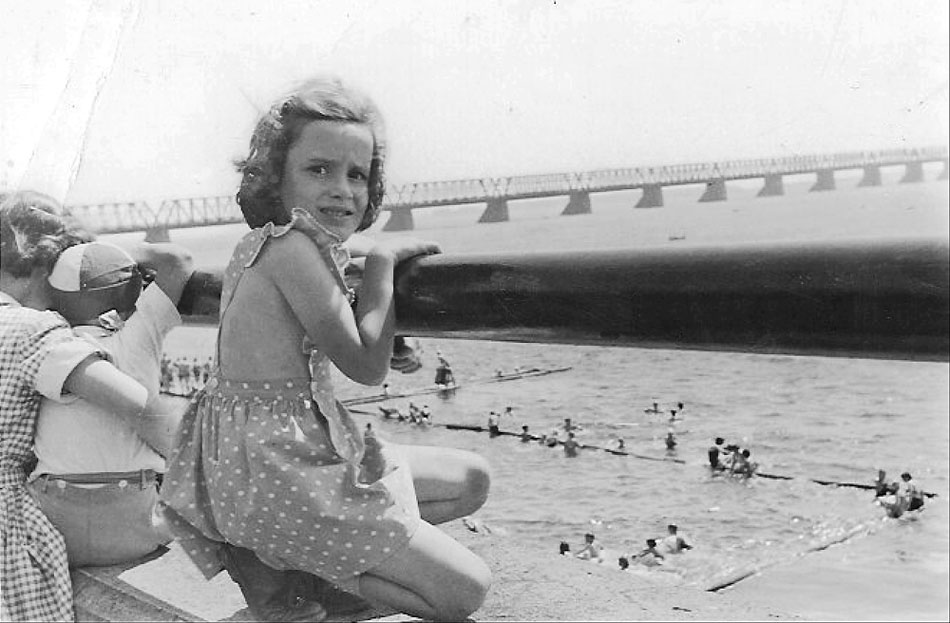 In the May, 2009 Newsletter we saw the St. Lambert Bathing Beach as viewed from the river-side, 75-years ago. In that photo we could see the high/wide wall with spectators viewing the events going on in the water. In this photo, taken only 60-years ago, we see what the spectators viewpoint presented: Victoria Bridge up-stream from the Beach, motorboats between the beach and Moffat's Island (now part of the Expo '67 World's Fair site), and bathers in the water and along the shoreline walkways. (Photo provided by Betty Walker C-'59) 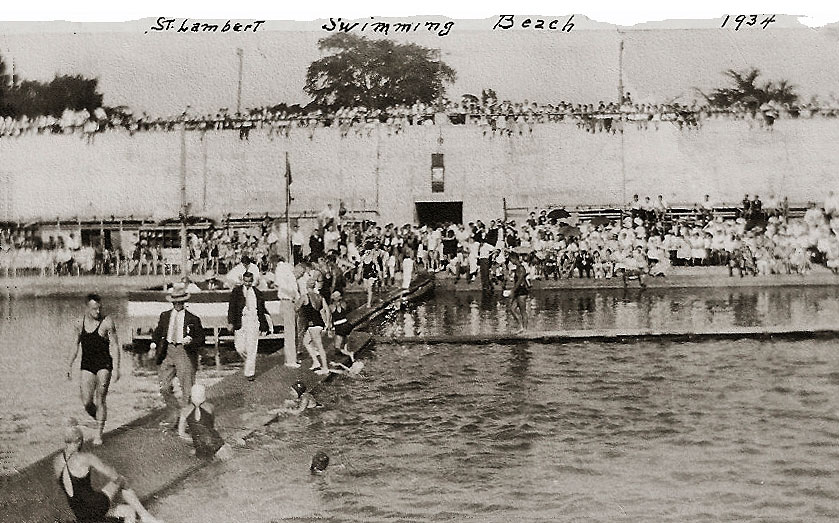 Running from the foot of Victoria Ave. to around St. Denis, St. Lambert had a gigantic cement wall built to hold back chunks of winter ice whenever the St. Lawrence reached flood levels. Around the middle of this structure a stairwell allowed passage down to the water level where bathers could change and store their clothing and sometimes spend an entire afternoon with friends enjoying the 'clean' St. Lawrence River water.

According to our alumni historians, Ross McConnell and Lorne Perry; Once a year a major swimming event was held, attracting hundreds of participants and spectators.

"From my recollection and what I could find out this event at the Beach was a swim meet. They were very popular events as evident by the number of spectators on the top of the cement wall. Andy Forkker who lived on Lorne Avenue was usually the starter. This was during the period that Bob Talbot was the lifeguard. Bob was later joined by Robert Gravel who also handled lifeguard duties." - Ross McConnell . (Photo provided by Betty Walker –C'59) 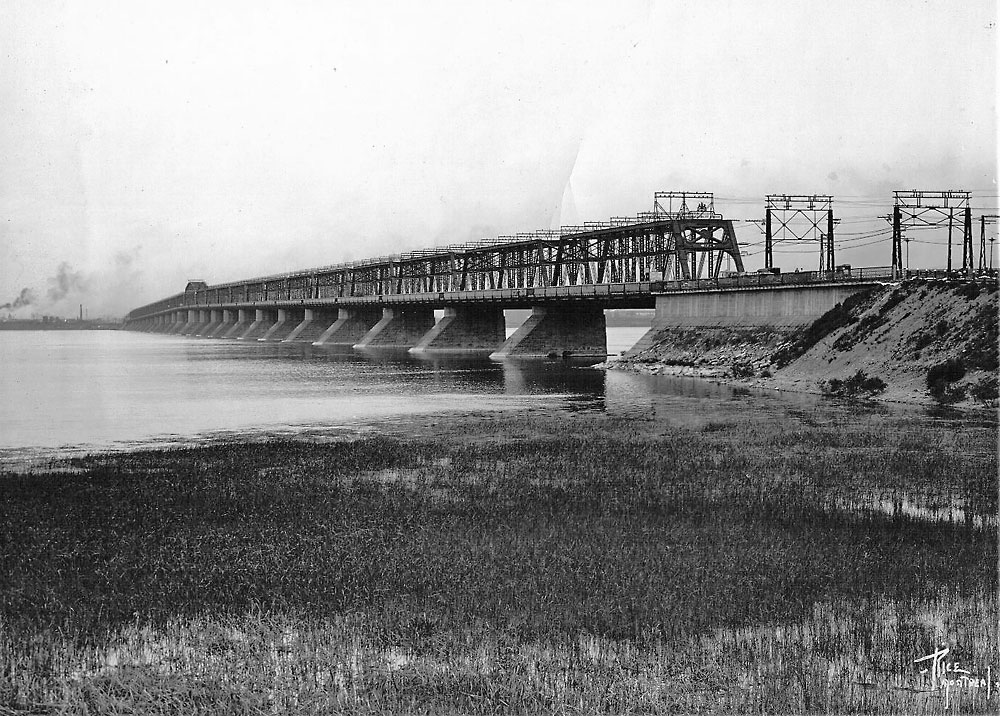 Victoria Bridge from the South Shore

My first recollection of the Victoria Bridge goes back to when it looked like the view that appears in this photograph. It was long before the seaway was constructed which included the St. Lambert lock and the train bypass as part of the system and the bridge structure. Tom of ’The Cave’ (popular restaurant and famous meeting spot in St. Lambert) frequented the quiet water, just beyond the foreground of weeds, to cast a line or two. He moored his boat down stream of the bridge and on the right fishing day he would row up stream, pass under the first span, throw out the anchor and try his luck within the shadows of the bridge.

Originally, there was a toll to cross the bridge and I remember my dad buying a book of tickets every so often. Each ticket allowed you access to a crossing. They were less expensive than a cash fare and were collected at toll gates located at each end of the bridge by CN toll collectors.

Back then, the Montreal & Southern County Railway operated streetcars and part of their route, between the south shore and McGill Street in Montreal, was across the Victoria Bridge. The track ran on the down-stream side of the bridge with two-way car traffic on the up-stream side. After a night ‘on the town’ in Montreal, the ride back home over the narrow bridge was quite the experience. This was before the widening of the car portion of the bridge and the installation of a metal grid roadway which helped to break-up any ice that might form on the roadway. I presume it also cut down on the maintance of the road surface and superstructure. The Victoria Bridge, an engineering marvel, a figurehead for St.Lambert and surrounding communities. A sight that brings back many memories and pleasant thoughts. The Victoria Bridge - the way to Montreal - the way to the east and the Atlantic. (Ross McConnell) 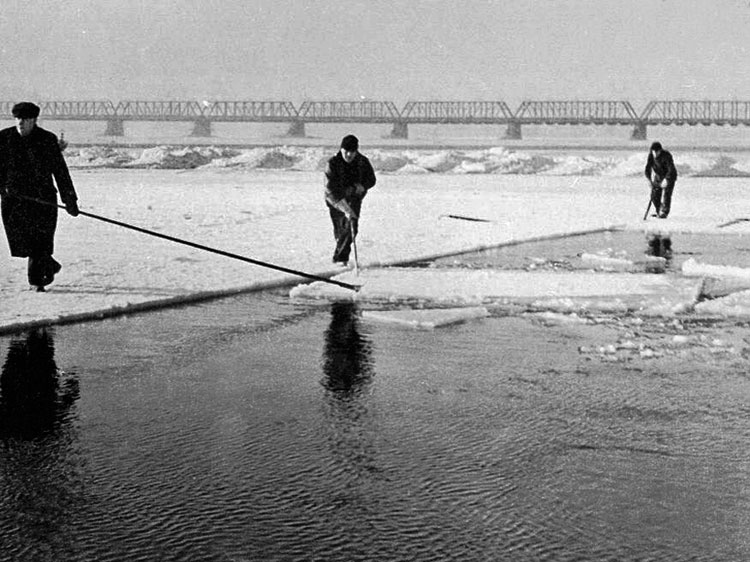 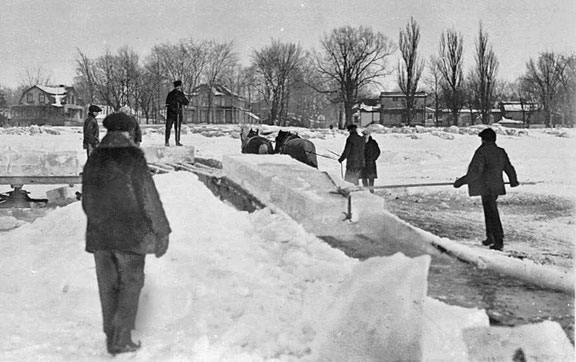 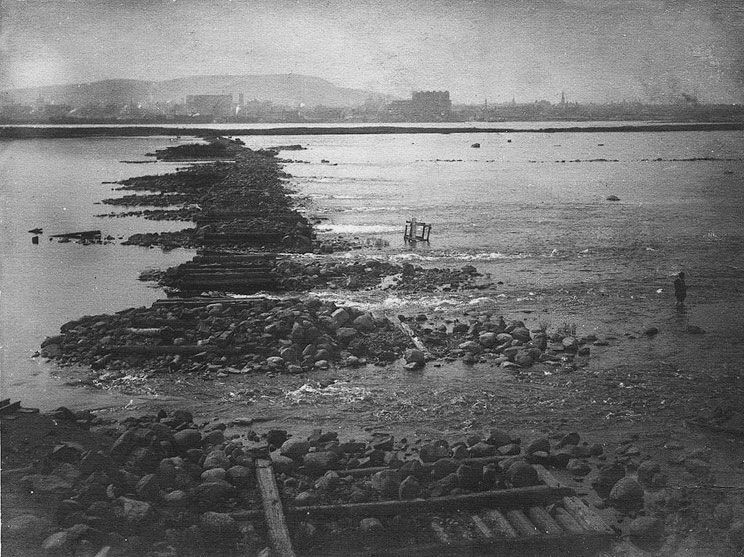 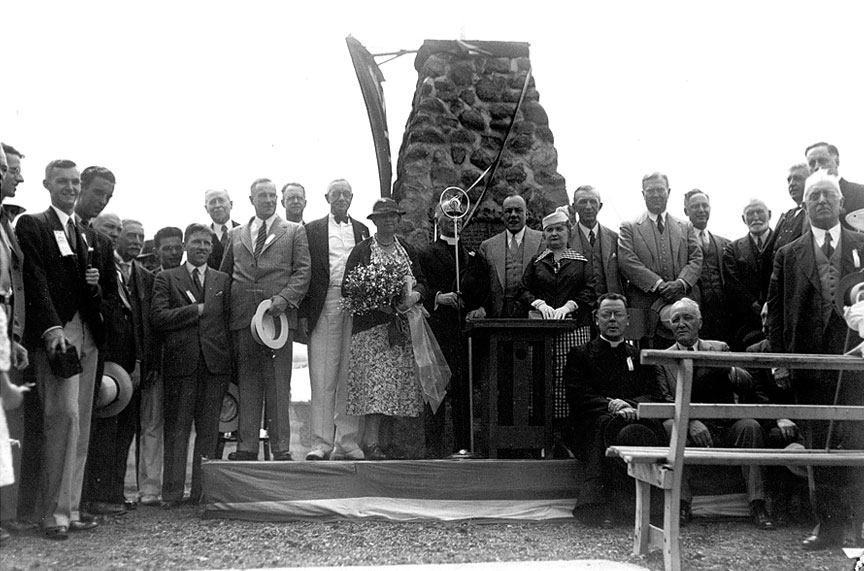 July 1936 St.Lambert helped celebrate the 100th anniversary of Canada’s first common carrier railway, the Champlain and St.Lawrence. The key event was unveiling a plaque on the waterfront near the foot of Victoria Avenue commemorating the terminus of the railway at Moffat’s Island. Although the railway didn’t reach that point until 1852, 16 years after service began between Laprairie and St.John’s, for commemoration purposes, its arrival there was lumped in with the larger ceremonies in Montreal and St.John’s.

This photo features the group assembled at St. Lambert’s stone cairn, (Riverside Drive and Victoria Ave.) the flag draping already removed. To the right of the antique microphone, Montreal Mayor Camillien Houde stands with Mme. Houde. Next to him is Sam Hungerford, chairman and president of CNR. I suspect the gentleman and his wife to the left of the mike are the St.Lambert mayoral couple, but I don’t have names. At the left edge of the photo are members of the Canadian Railroad Historical Association, which had championed the idea of commemorating this centenary celebration. One of them, C.L.Terroux (just peeking out over the shoulder of a tall gentleman) was a longtime St.Lambert resident and owner of a lumber business on Victoria Avenue just south of Union Boulevard. His home on Rutland Road was notable for the array of antique railway signal masts in his front yard. (L. Perry and CNR) 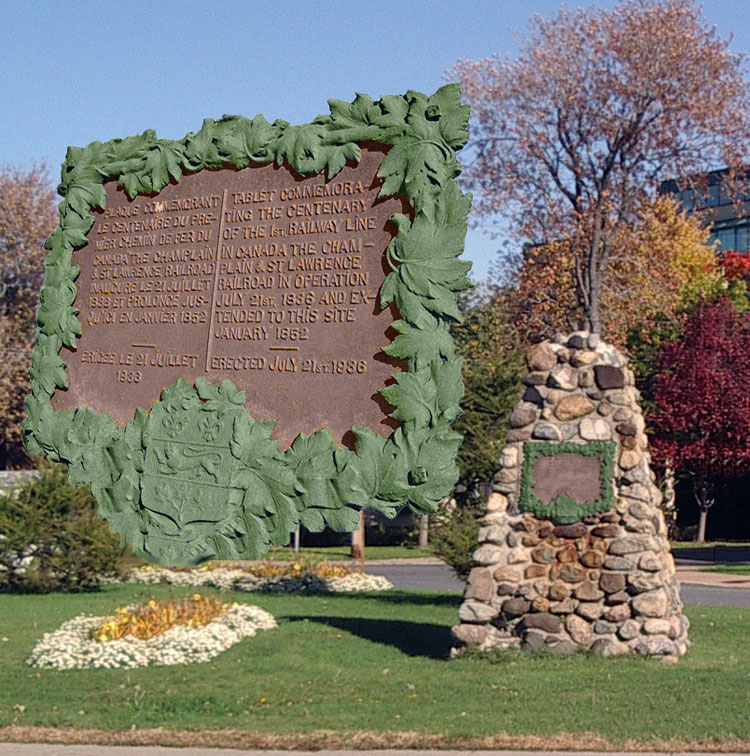 October 2007 During the construction of the St. Lawrence Seaway, then followed by the building of Highway Rt. 20, adjacent to and paralleling Riverside Drive, the stone cairn was moved to the eastern side of Riverside to a position approximately 50' from the original site, and now stands on the grassy knoll between Riverside and Logan. (H. Carter) 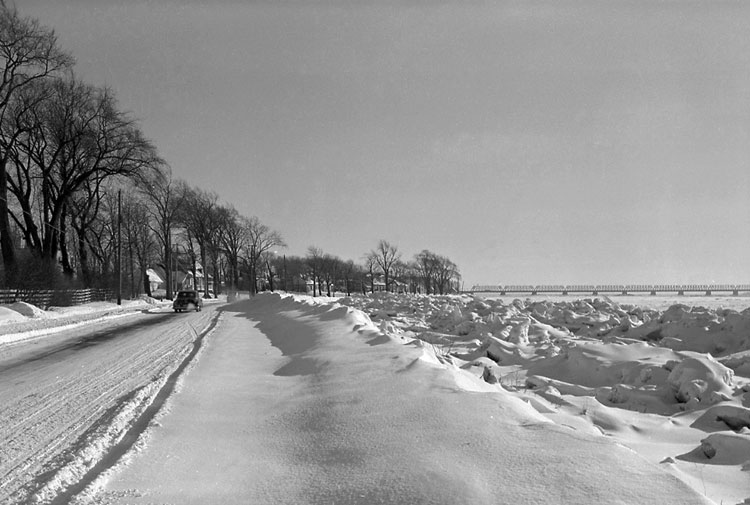 Riverside Drive. Heading for the Victoria Bridge and the main route into downtown Montreal. (A.Little)

Riverside Drive up-stream from the Victoria near the bottom of Alexandra Ave. During a flood, river ice would flow across fields and onto the fairways of the Country Club Golf Course. (Société Historique Mouillepied de Saint-Lambert)

Looking down upon the St. Lambert Bathing Beach between Lorne and Argyle Ave's. and a bit further downstream, looking back at the dike (Société Historique Mouillepied de Saint-Lambert) (A.Little) 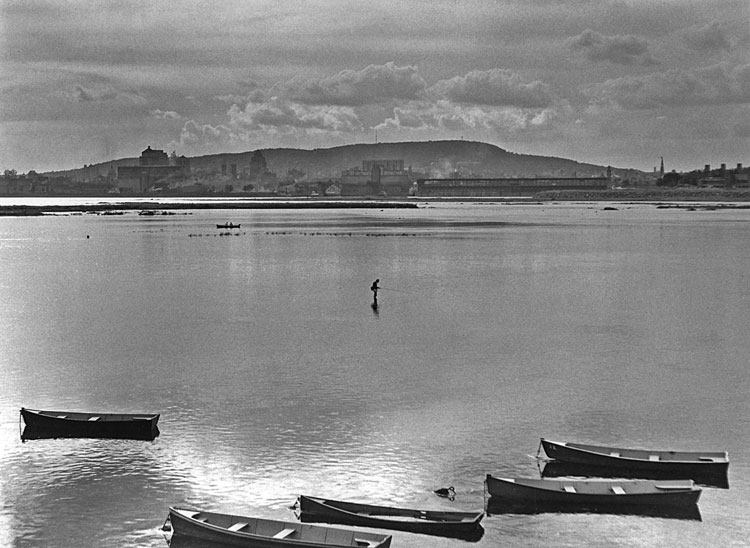 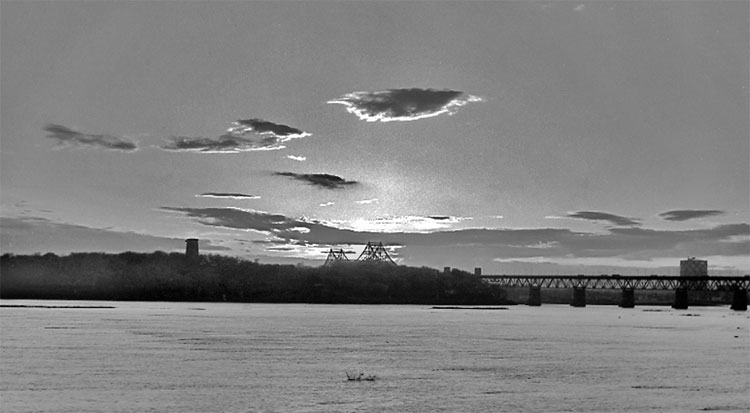 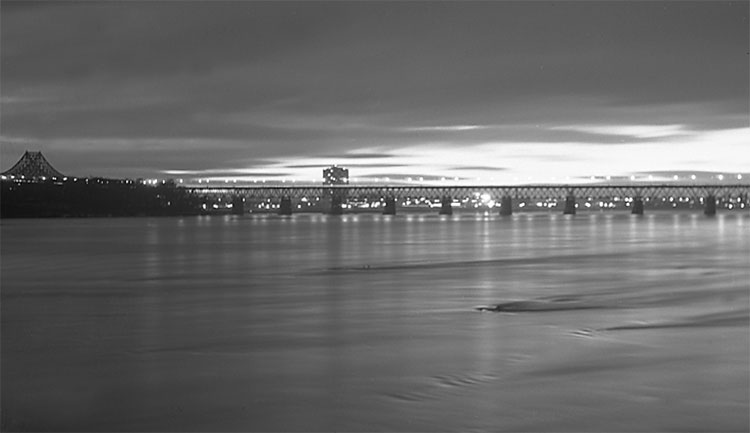 Another view of the Jacques Cartier Bridge with lights coming on. (A.Little) 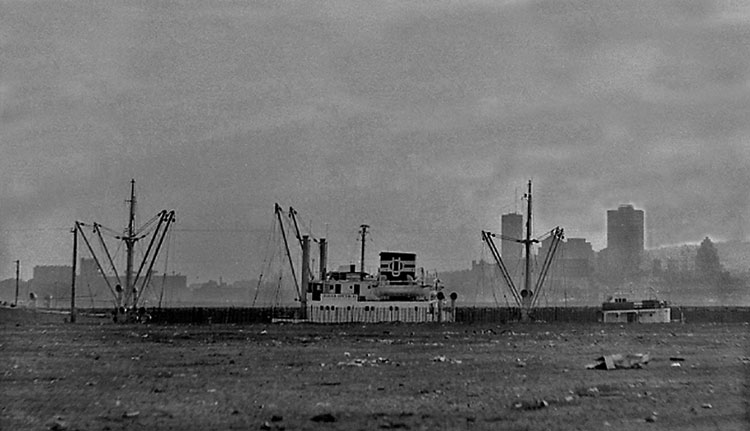