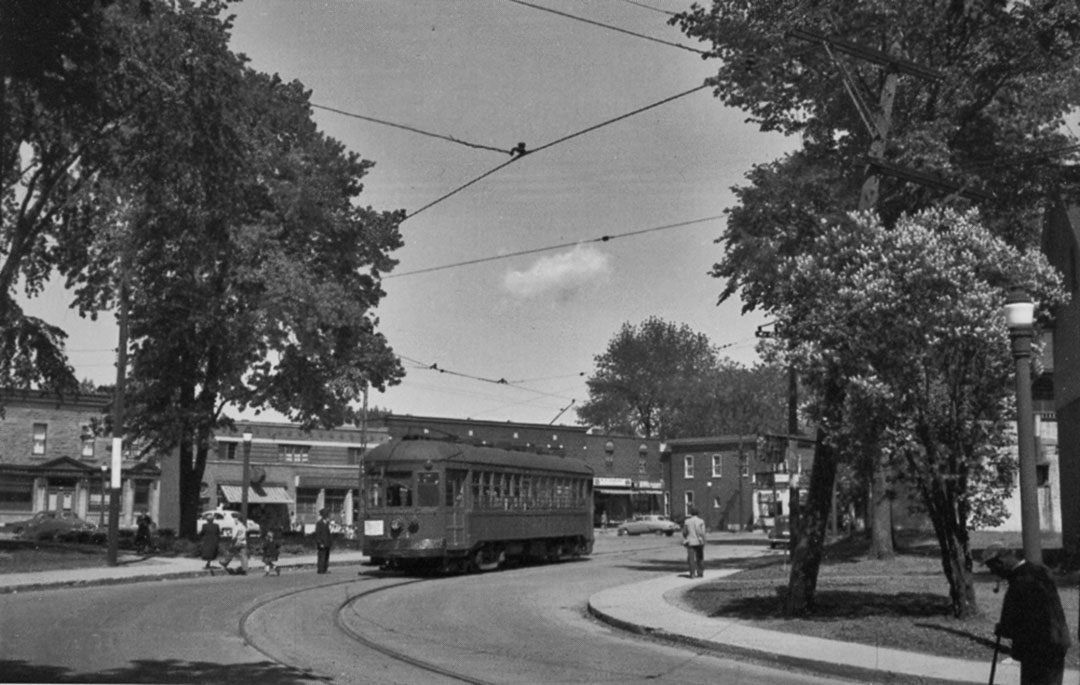 The Montreal & Southern Counties Railway played an important part in the lives of St. Lambert families and others on the south shore, especially before the automobile was a common sight. The streetcars were first manned by a motorman, with a conductor at the rear of the car. Then came the smaller, but more efficient, one-man cars, operated by a motorman/conductor. The service consisted of cars running on a twenty-minute schedule -- on the hour, twenty after and twenty to the hour. It was a very reliable service even though it was often called the Montreal and Sometimes County Railway.

This photo shows the northbound car on its way to Montreal at the Elm Street stop. At this stop there was a drinking fountain for people and horses, separate facilities of course. It had been dedicated to the City by a Mr. Drinkwater. How apropos! The drug store in the background at the corner of Victoria and Webster streets was known as Chalmers later to become Browns. To the right of the streetcar was a small office housing a real estate and insurance broker called Baxter's. Next to this building was the office of Doctor Oulton who conducted the annual physical exams at the high school along with his general practitioner duties. On Victoria Avenue, just off the nose of the streetcar, were the Bank of Montreal, if I remember correctly, and the Thrift (Stop & Shop) grocery store. Out of the picture to the left were Taylor's original store location, Cousineau's pool and bowling emporium and the Victoria Theatre.

The MS&C jitney was a vital part of growing up in St. Lambert along with people living in Montreal South and Greenfield Park. Other than being a means of getting about, it also provided a source of fun. During winter a special streetcar with a rotary brush mounted on its front would sweep the tracks and switches of snow. The sweeper was made of sturdy, bamboo sticks, which often came loose and provided us kids with the means to smash buttons from the front of overcoats. All one had to do was bend the bamboo and under tension release it against an unsuspecting bone-made button on your buddies' overcoats or sweaters. Say no more – our parents were not pleased.

CLANG-CLANG WENT THE TROLLEY and lots of good memories! (R.McConnell) 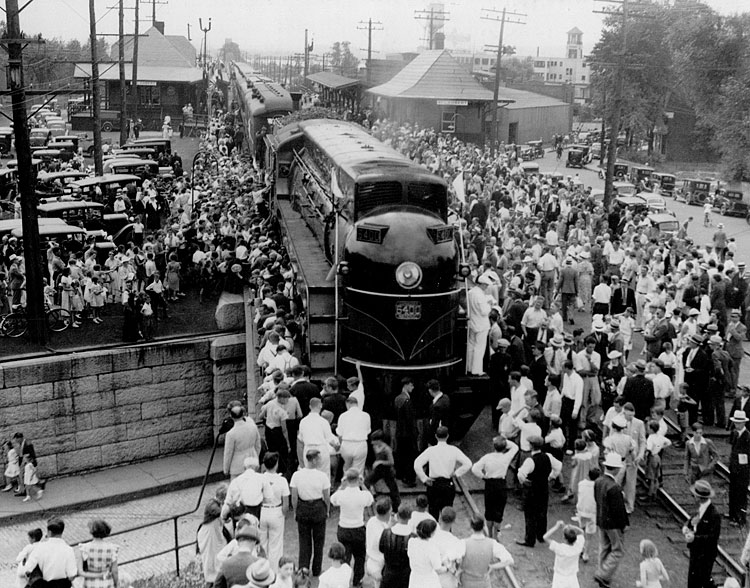 A new CNR passenger locomotive arrives in St. Lambert to be greeted by a huge local crowd. July 18, 1936. (CNR) 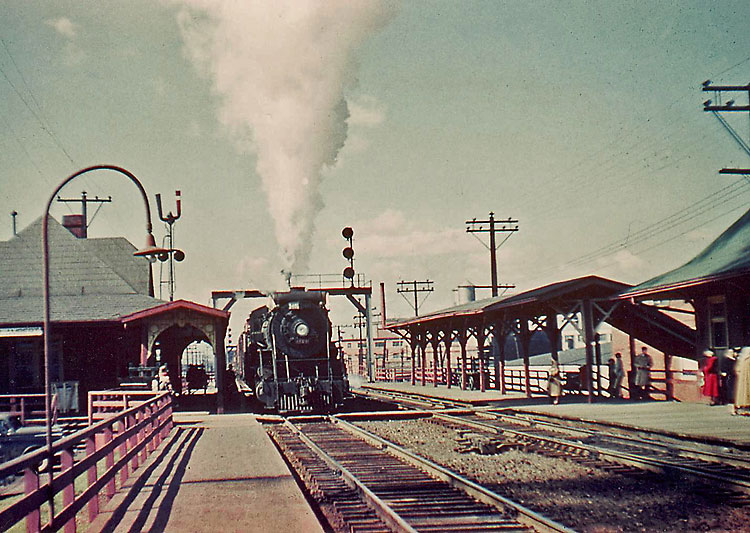 Passing by the St. Lambert train station is a freight train bound for Rouses Point, N.Y., just over the border from Cantic QC. It carried freight for connecting US railroads, the Deleware and Hudson and the Rutland, for points anywhere in the US. The date was 1953 and the time of day was mid-morning. Notice some folks waiting for a passenger train inbound to Montreal. In the background you can just see the black outline of Victoria Bridge. The main station building is on the left and a waiting room on the right. The City of St. Lambert Water Towers are seen beyond the roofs of Asbestonos and Waterman's. (photo by Lorne Perry) 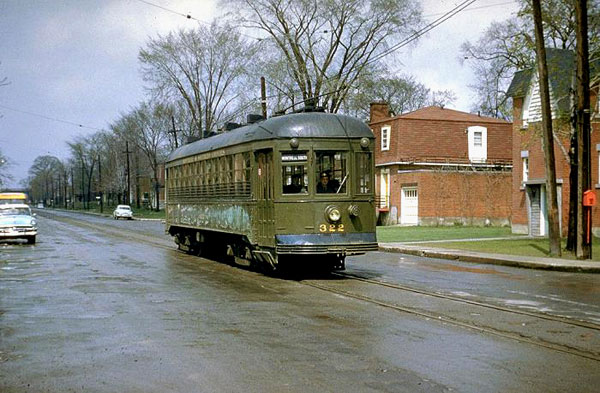 Desaulniers St. Montreal & Southern Counties Streetcar heading from Montreal-Sud,
into St. Lambert and then to Montreal via Victoria Bridge. (Unknown) 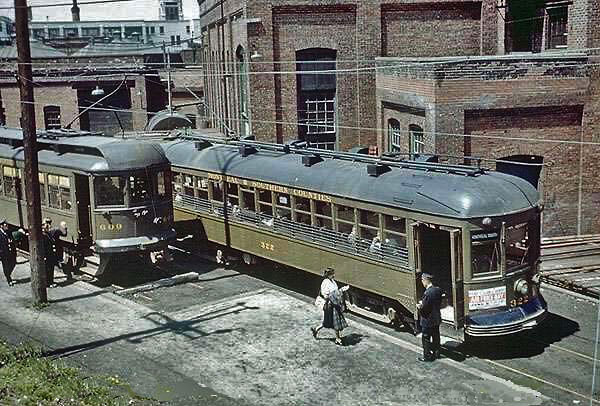 Bridge St. Passenger is rushing to board Streetcar ready to leave the Elm St. terminal. (Unknown) 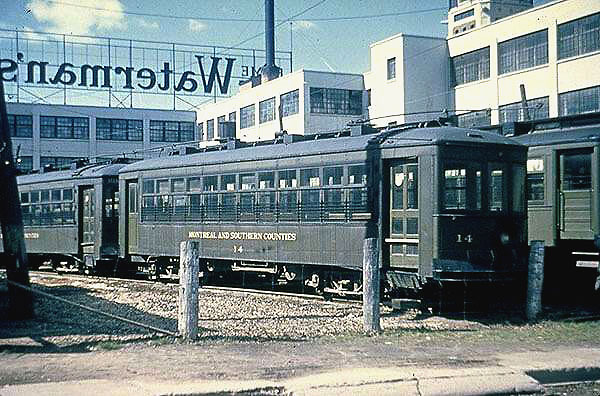