CCHS Bands of the Late 60’s

Seeing the pictures of St. Barnabas Church takes me back to the 1960s. Café Twilight was a regular Friday night happening in the St. Barnabas hall behind the church. Café Twilight most likely started in the fall of '66, I know it went until spring of '68, but am not sure if it started earlier or went longer. Since this chapter in the life of CCHS and St. Lambert hasn't appeared anywhere on the website yet, let me start the story. I hope others will fill in the gaps so that eventually, the whole tale will be told.
Alan Hardiman

Café Twilight saw many of the really great (and some not-so-great) bands that were formed at CCHS and came out of the mid-60s in the wake of the British Invasion. As far as I can remember, Don Elliott (class of '69) was the mastermind behind the whole thing. "Herbie" as he was known due to his relatively diminutive size, he bore the moniker of the cartoon character of similar stature—was our answer to impresarios Donald K. Donald of Montreal and Bill Graham of Fillmore fame in the US. How he did it, I don't know, but every Friday night Don managed to book a band, and for 50 cents, you could get your hand stamped at the door and dance and party all evening. It opened at 7:30 or 8:00 pm. The bands played three 40-minute sets, with 20 minutes in between, and the last dance at around 11 o'clock was always eagerly anticipated, since it was guaranteed to be a long, slow dance and the last chance for a stolen kiss—or more—on the dance floor, after a night of playing cat-and-mouse with that girl who always played so hard to get.

Let me tell you about the bands. The best was the One-Track Mind, with Peter Kerr C'66 on drums, Dave Corbeil C'66 on vocals, Gary Millward C'66 on organ, usually looking regal in his tails, and Jim McCarthy C'67 on electric fiddle bass. (Someone please confirm the details, please. Who played guitar?) But they were the best of the lot. Peter and Dave would switch roles for the second set, and Dave would drum while Peter took over the front-man duties. Their signature song was Gershwin's "Summertime" played very slow, and always the last song of the evening. Those guys really cooked, especially on tunes like "I'm So Glad." They were so good, they also played at the Youth Centre on L'Esperance Street, where J.B. and the Playboys, The Rabble, and bands of that high calibre were invited to perform. 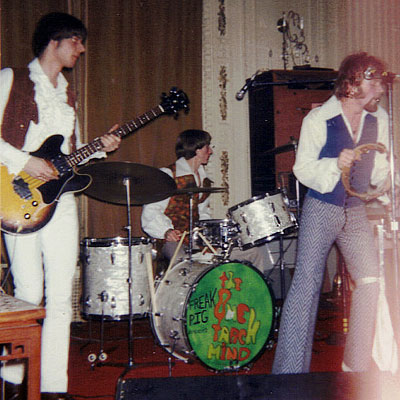 First got together in high school in 1965 as "The One Track Mind" The group finally called it quits in late 1970, when disco started to emerge, and venues were hiring DJs instead of live bands. A sad era in live music! Nice of Alan to remember us - that's a long time ago! - Gary Millward 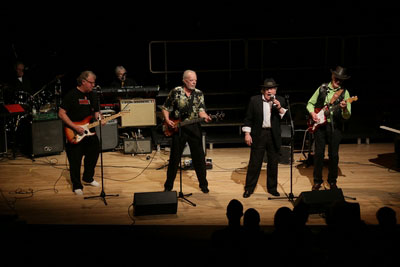 It's been great fun getting together with some of the guys from the old group, along with some other St. Lambert musicians to revive our musical careers as “Cadillac Music”. We've been at it since late 2009, when Bill Gambrell suggested we re-unite for the 2010 CCHS reunion. We had so much fun playing there that we just decided to keep it going. We've changed a couple of personnel since then - new drummer and guitarist. - Submitted by Gary Millward 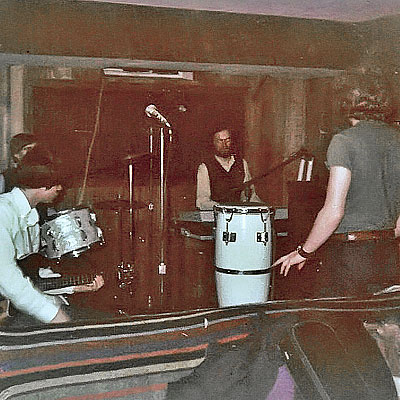 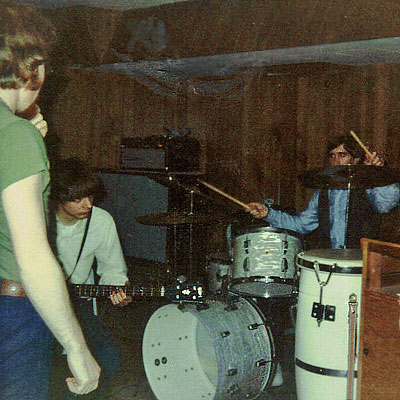 Then there were The Tymes, with Gordon Ogilvie C'68 on his Harmony Sovereign guitar, Bob Gambrell C'68 on drums, Gary Delo C'69 on Fender Jazz Bass, and the late James MacDonald C'69 on lead guitar. Those guys were good, too. Gordie also had a sawed off electric guitar that was beat up and distorted like crazy, and when he brought it out to play "fuzz guitar" we all went nuts. Their signature song was "Empty Heart" by The Rolling Stones.

None of the bands are still playing today and my dear friend and band mate, James MacDonald, is deceased. Personally, I have played professionally throughout my life and continue to play in a country band in southern Ontario. - Submitted by Gord Ogilvie C'68 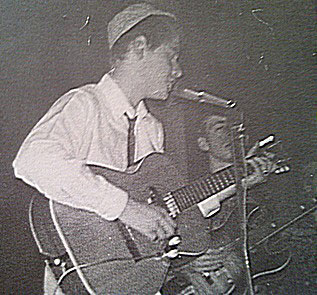 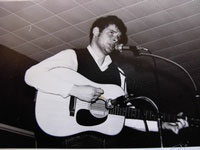 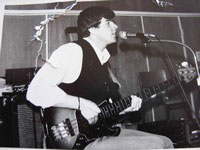 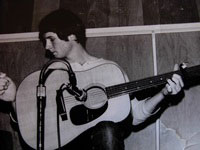 Gord Ogilvie, Gary Delo (bass guitar), and Gary Batchelor (lead guitar) performing in 1969.
We played as a trio from 1969 to 1971.
Another band was The New Improved Yellow Brick Road. Peter Carruthers C'69 played organ, and they actually played the Sgt. Peppers Lonely Hearts Club Band album fairly well at Café Twilight soon after its release in the summer of '67. That album was the incessant soundtrack of Expo '67 and the follow-up fair, Man and His World in 1968. I recall Peter rubbing his forearm up the keys to create the final crescendo of "A Day in the Life." I believe Robbie Holmes C'67 was the lead guitarist and Malcolm Myerson C'68 was the drummer in the band. 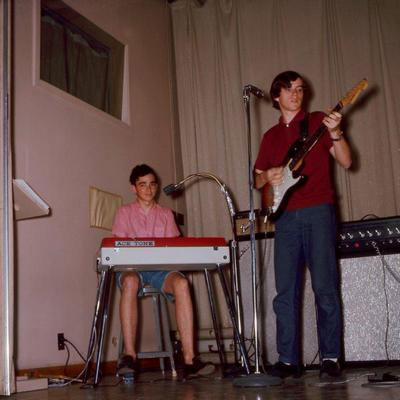 Peter Carruthers with Robbie Holmes on guitar playing at the community centre on L'Esperance Street in St Lambert! 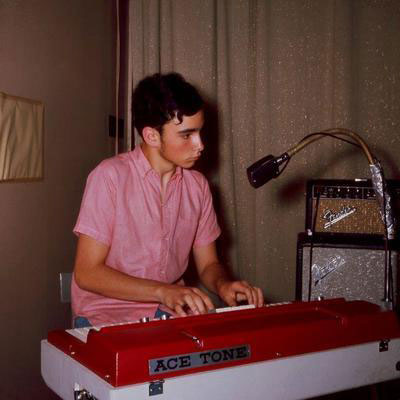 One day in '66 or '67, Malcolm and I were walking together up Birch Avenue, and he said to me, "All of us guys are playing our asses off in football, and you guys with guitars are getting all the girls." How right he was! So it was no surprise that Malcolm, seeing the error of his ways, ended up on stage, with not a few of the girls sitting on the band's amplifiers all the while they were playing. (Any of you girls want to chime in on this point?)

Infinity was comprised of the late Don Hastings C'68 on guitar, Jimmy Bentley C'66 on drums, John Stewart on bass and Jim Thompson on lead guitar. They were good too, with a Motown and R&B flavour to their music— "Turn to Stone," "The Same Old Song," "You Keep Me Hanging On."

Alan Hardiman C'68 (that's me) played bass, with Ken Dingwall C'67 on guitar, Johnny Hum C'68, Johnny's family owned the Chinese restaurant on Victoria near Churchill Blvd. in Greenfield Park) on drums, and Robin Sparber on electric guitar. Johnny called us The Imperials. We played at the University Settlement on St. Urbain Street in Montreal, and also at the Black Watch Armoury, as well as at Café. Johnny's cousin Him Hum was a big wheel in town, all suit and tie, slicked back hair and well shined shoes. Him Hum got us the gig at the University Settlement.

We used to go and mooch egg rolls from Johnny at the back door of his parents' restaurant. Who cared if they were cold, straight out of the fridge! Robin's parents had just come up from New York and they taught in schools in Greenfield Park. I had met Robin at the beginning of Grade 10 in 1966-67, when I had just returned from a year in England to a much larger school that now included Preville students, and Robin was a new kid from the States. So we were both a bit disoriented. He has been my closest friend ever since —coming up on 50 years now.

When Don Hastings tapped me on the shoulder in Mrs. Cyr's class one day in the spring of 1967 and invited me to join Infinity, I was ecstatic. These guys had built their own PA speaker columns, and had metal letters screwed into them—"INT" which stood for "Infinity Noise Towers." I brought Ken Dingwall along to the first practice —Robin had gone to visit family in New York —and we became The Ethnic Equation, with Don switching to 12-string electric guitar.

Sometimes after band practice, Jim would drive us around in his mother's big blue Chrysler out to Harvey's, which was a brand new drive-in joint with the juiciest burgers and the biggest chocolate shakes any of us had ever seen. Then we'd cruise up Victoria Street, stop at the traffic light at Green Street or Desaulniers, and everyone would get out, run around the car a couple of times, get back in and drive off. Anyone else remember the Chinese Fire Drill?

We played Café Twilight three times. Twice when the stage was down at the far end, and once when it was near the door. Don Elliott was always trying to figure out the best setup for the kids and the bands, and was experimenting with the room layout. The name "The Ethnic Equation" came from a Smothers Brothers album, entitled "Think Ethnic." One of the strange anomalies of those years was the popularity of comedy records. Three or four of us would gather with our girlfriends in Ken's basement and listen to Bill Cosby ("Why Is There Air?"), Woody Allen ("The Moose!"), Rusty Warren ("Knockers Up!"), or the Smothers Brothers, trying to keep from breaking up laughing while simultaneously trying to get to second base. But it was a hopeless cause!

Our band was managed by a Brian Epstein lookalike in a natty suit by the name of John Hylton, and he got us our own business cards and printed contracts. After that, Steve Brethour C'68 and one of his associates booked us for a couple of gigs, one of them being Ecole St-Jude Catholic Girls' School in Longueuil. Steve Brethour was a pretty good guitarist in his own right, and, like Robbie Holmes, had a Fender Stratocaster that we all envied. But his partner was something else. His name long forgotten, even then we called him "Sloth" due to his remarkable lack of anything resembling energy. At the girls' school gig, Sloth in his ratty lumberjack shirt had his ear pressed up to the PA speaker so that he could hear all the words to "Louie Louie." The funny thing is, even Jimmy Thompson, our lead singer, couldn't figure out the words from the record, so he slurred something that any self-respecting deviant might construe as being sufficiently filthy, and therefore genuine!

Looking back on it, I wish we had asked Don Elliott to manage us. He was the real thing. Then we might have gone somewhere and had something of a career in music.

Anyway, this is just scratching the surface. Photos from Café Twilight are pretty well non-existent, as far as I know (which is probably a good thing). I've never seen any. But if anyone has any pictures, or recollections to add to what I've begun here, please send them in.