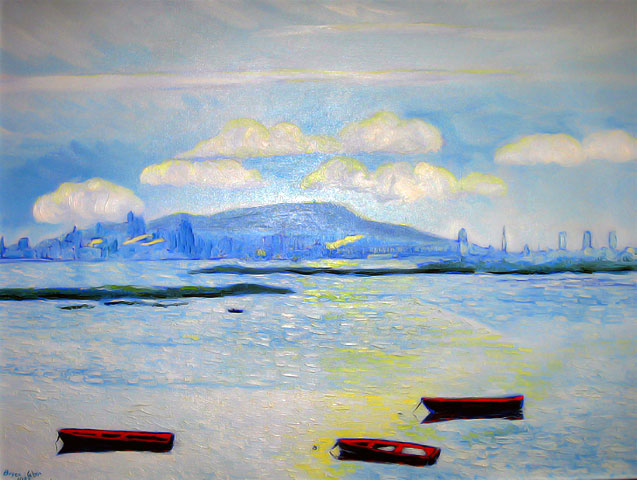 Painting by friend and schoolmate Bryce Weir, working from one of my photographs.
It depicts Montreal as seen from the foot of Sanford - 1952.

When the American novelist Thomas Wolfe chose You Can't Go Home Again as the title for his 1934 novel, he put into words a truth as old as civilization itself. Because the passage of time changes everything, we can never really find the “home” we left behind. It exists only in our minds, in our memories.

The St. Lambert of my youth, the forties and fifties, will always be “home” to me, but when I return today it is no longer the same. Yes, the town is still there and so is the house on Merton Avenue where we lived for ten years. A few students from my high school days even settled in St. Lambert and raised families of their own. There are familiar landmarks as I walk the streets. The cenotaph remains, and many of the buildings on Victoria Avenue are much the same as they were in my youth. With all these visual aides I keep telling myself I should be able to reconnect with the past, but it eludes me.

But there are extenuating circumstances in St. Lambert. There have been a number of fundamental changes that make any reconnection even more difficult. The St. Lambert I knew as a kid was defined by the St. Lawrence River. It was literally at my doorstep and became my own personal playground. I was a water rat and spent summers swimming, battling the swift current and exploring its vast riverbed. It was only later that I came to the realization that all rivers weren't the size of the St. Lawrence, and not all offered the same opportunities for recreation. Then, the building of the St. Lawrence Seaway stripped St. Lambert of its shoreline. A vast green park now stretches where once waters ran clear. The town is no longer defined by the river. It is a huge loss.

There was another fundamental geographical change from my time in St. Lambert. Back then, making the journey from my home on Merton Avenue to the old high school on Green Street, I rarely walked on pavement. There were so many vacant lots and wooded areas along the route that my only contact with pavement came when it was necessary to cross streets. Today, those spaces are all filled in with homes. Dulwich pond, where we hunted frogs in the summer and played pick-up hockey in the winter, has disappeared, gobbled up by a new housing development.

So, two of the defining physical characteristics of the St. Lambert of my youth are no longer there. No river, no vacant lots, no wooded areas. In short, the children who followed in my footsteps lost a valuable chance to connect with the natural world. We could swim the waters, roam the woods, unsupervised, in ways that would probably terrify today's parents. It was the gift of freedom – something we took for granted at the time, but in hindsight I realize it was an incredible treasure.

A final change to the town isn't geographical, but linguistic. We rarely heard French spoken in the St. Lambert of my youth. The population was largely English. Over the years that has changed and now the dominant language is French. I don't say this with any bitterness. It is just one more hurdle I encounter on those occasions when, seeking something from my youth, I return to the streets of St. Lambert. The geography has changed and so has the nature of the words spoken. Wolfe was right – you can't go home again, and I am not sure why I try. But try I do. I miss that town where I grew up. I feel incredibly fortunate to have lived there when I did.