Angus Cross is the Editor of our alumni newsletter, Alumni Connection

View other Flashbacks by Angus Cross

Several things occurred the summer of 1958, which changed things for our family. The "old man" decided to buy a yacht. We went out to the Royal St. Lawrence Yacht Club in Dorval and inspected a 52 foot motor cruiser named "Kona". 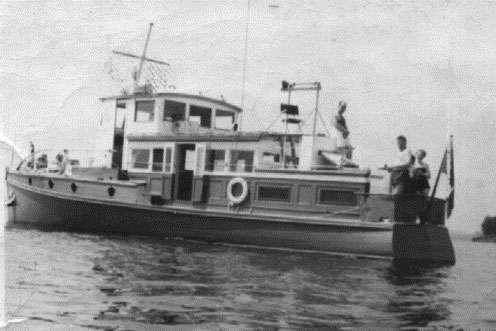 The owner, an ex Canadian Army colonel, took us out for a short cruise on Lake St. Louis and we were hooked. A few weeks later Tom Rossiter from Halifax, visited us on board. He seemed very perplexed and after a few looks around the deck he took off the hatch on the foredeck and looked inside. He found his initials carved there where he had put them years before when she was running rum in Nova Scotia under the name "Wyndora".

Yacht Wyndora in earlier years. Bridge deck was added after she was sunk and restored as "Kona" 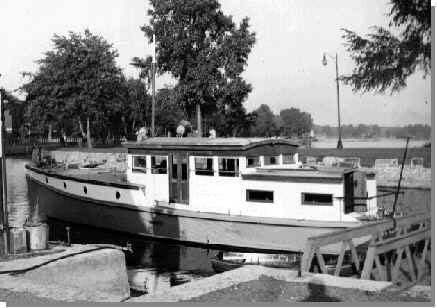 We renamed the yacht "Gabrielle" and moved it from Dorval to the Longueil Boating Club on the South Shore. This meant a trip down Lac St. Louis to Lachine and then traversing the old Lachine Canal down to Montreal Harbour, and then across the St. lawrence to Longueil. Every weekend we took the boat down river to the Boucherville Islands. Often we would meet up with the Lalonde family, from Longueuil, who had an old yacht named "Neptune". This was our first real exposure to a French Canadian family and we had loads of fun with the Lalonde kids hunting frogs. Jerry Lalonde used to fry up the frog legs and they tasted great. Jerry's brother had a sea plane and would fly in for the weekend fete. There were horses on the island and my brother, Duncan, once took some pot shots at them with my air rifle.We were still a wild bunch when left to our own amusement.

September 1958 and I was back for year 2 in grade 10. My teacher was Miss Florence S. Rae whom I liked and who made me her class pet. Things were much better although I still struggled with French classes. I had made some good friends in John "Bones" Wright, Dave "Joules" Morgan, Ed Loveland, Fred Harris, Dave Poulsen and we hung out at "The Pit" ( St. Lambert Youth Centre), pool hall, or the Soda Bar. There were lots of dances at school and also at "The Pit". I discovered that Art Smith's class had a bevy of beauties and that going out with some of them had become of paramount importance to me. I went "steady" with a few of them but wasn't all that impressed until I got invited to a Sadie Hawkins Dance by Joanne Lemke.

The basis of Sadie Hawkins Day is that girls take the initiative in inviting the boy of their choice out on a date, typically to a dance attended by other bachelors and their aggressive dates.

We had a great time and a few weeks later ended up going steady. We went to Hi-C and spent most of our spare time together.

Does anyone remember our Hi-C leader? A lovely lady, I think her name was Mrs. Luckhurst.

My parents seemed to approve to at least the point my father wasn't giving me such a hard time about my choice of girls. By spring he even condescended to the point that I could bring Joanne with us to Dorval to work on the Gabrielle. He did give her a hard time about wearing blue nail polish and that she wasn't much use at sanding. Little did I know at the time that I had met the love of my life?

The summer of 1959 was filled with adventure. We had planned a major cruise on the Gabrielle. We went up the Ottawa River to Ottawa and through the locks into the Rideau system. Joanne came with us for the trip down to Kingston from Ottawa. She fit in fairly well as part of the crew although she wasn't used to living in relatively close quarters with a bunch of boys. She left us in Kingston and following some repairs at Kingston Shipyard we set off down bound through the St. Lawrence Seaway back to Montreal. We then continued downstream to Sorel and into the Richelieu River to Lake Champlain. It was a great way to spend the summer.

That fall I was back at CCHS for grade 11. Joanne wasn't there as her father had been transferred to Foymount, Ontario. . We did continue to write each other, and she did come down to attend the Spring Prom at CCHS.

The "old man" used to make wine every fall in rum barrel that was kept in the basement. I am sure my friends and I drank at least half of it over the winter.

I wanted to go to the Navigation School in Rimouski after high school but 'the old man" talked me out of it. He didn't think there was much future in going to sea and he wanted me to work in the family business. I had been working in the office in Montreal for the summer and had obtained my Seaman's Identity Card, Canadian Passport, Quarantine Card and was looking for a freighter going to Bremen, Germany. I was looking forward to making a getaway from St. Lambert and the family.