What an Old Fossil Does in Retirement

As retirement approaches, most people contemplate what they are going to be doing for the rest of their lives, while others have no plans in place when the inevitable day arrives. Of course, one's interests, health, funds, family commitments, and many other issues factor into how to fill the spare time that suddenly becomes available. We all know friends who are busier in retirement than they were when working full-time, but sadly, some friends sink into inactivity and depression, feeling like the best days of their lives are all in the past.

Developing a variety of hobbies and pursuits during the middle-age years certainly eases the transition into retirement, and gives a person something to look forward to. So it sounded perfectly reasonable for this 'old fossil' (Class of 1961) to spend more time searching for other old fossils. And by this I don't mean classmates from CCHS, but the really old kind -- the ones lying underground for thousands or millions of years.

And so it was that I jumped at the first chance to go into the field with a friend, Andrew Fallak, knowledgable about hunting fossils and human artifacts. 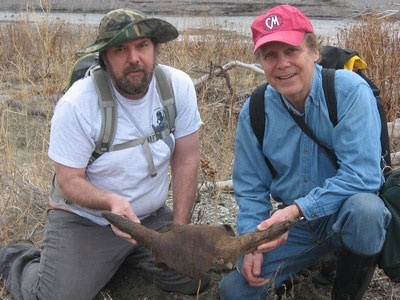 After all, it is essential to know where and what to look for to have any hope of finding paleontological or archeological treasures. Developing a so-called "search image" for particular fossils takes some time (as in shopping for anything), but once the eyes and brain become focussed on what to look for, and knowledge is gained, successes become increasingly frequent, and the sense of excitement for potential discovery becomes supercharged. "What might be found in the next turn of the river or over the hill" keeps me going all-day long, hardly aware of the heavy weight of fossils and rocks building up in my backpack.

A 6.4-cm bone or antler point found by Andrew,
which shows a fluted face and deep notches, and possibly made for ceremonial burial.

One of my favorite hunting grounds is the Pembina Hills and River in southern Manitoba, close to the North Dakota border.
Before and after the last Ice Age (reaching its maximum 20,000 years ago, when an almost 2-km deep accumulation of glacial ice smothered the region), the Pembina River has been eroding through a fascinating sequence of ancient sedimentary deposits, going back in time to the Cretaceous Period (over 80 million years ago), when Manitoba and all the mid-West was inundated by the massive Western Interior Seaway, stretching over 3000 kilometres from the Gulf of Mexico to the Arctic Ocean. Giant reptiles and sharks swam in the waters, huge clams (growing over a metre in diameter) grew on the bottom, and pterosaurs (with up to 8-metre wingspans) and early birds glided over the surface, looking for fish to grab and devour. Volcanoes from the youthful, uplifting Rocky Mountains occasionally showered the sea with unimaginable amounts of airborne ash, which turned into thick layers of yellow clay now mined as bentonite. These beds are the source of large fossil creatures on display at the Canadian Fossil Discovery Center in Morden, Manitoba. 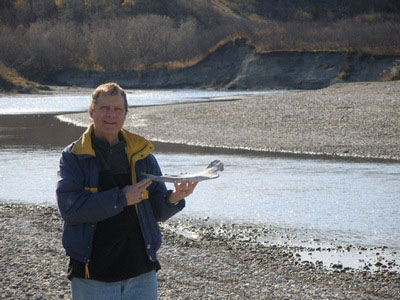 Bob Wrigley with a Bison jaw from the Pembina River, Manitoba

Once the Sea retreated, a succession of land plant and animal communities spread over the region, with many species leaving their fossil remains for someone like me to discover. As the river (especially the high, fast waters of spring floods) carried away the clay, silt, sand and gravel, fossils tumbled out of the banks and were left exposed on the gravel beds, or lie in view under the shallow water. This past year I found a vertebra of a Plesiosaur (a 8 to 20-metre long marine reptile), pieces of giant clam, a coral, petrified wood, two worked points made by Prehistoric People, several partial Bison skulls (both the American Plains Bison and its long-horned ancestor the Western Bison), and many hundreds of Bison bones and teeth. Each year water erosion uncovers an entirely new assemblage of fossils, just lying there for someone to pick up and appreciate. I hope someday to uncover a tooth or bones from a Mammoth, primitive horse or camel, or even some remains of an American Lion. It gives me great satisfaction to realize that my fossil treasures will be available for study in museums for many centuries to come; these specimens would have eventually been destroyed by abrasion or reburied had I not chanced to come along. 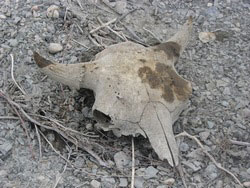 These fossil excursions I find stimulate that ancient “hunter-gatherer instinct” that lies imbedded in our DNA (although perhaps more dormant in some individuals). They also provide plenty of healthy outdoor exercise. It is never too late to recapture an old, or develop a new, pursuit or hobby. It takes the old three actions for success -- knowledge (which is more accessible now than ever before), motivation to start, and discipline to keep going. Pursuing enjoyable activities adds immensely to quality of life, and it is great fun to generate interest in one's favorite past-times in other people, especially youth. In my case, biology, chemistry and other courses at CCHS encouraged a life-long journey into investigating the natural world around me, and what is means to be alive.