Lorne Perry has contributed a series of articles about Depression, War and Recovery in St.Lambert in the 30's and 40's

Born in 1931, at the real start of the Great Depression, I spent my growing up years in and around St.Lambert, Quebec. This was a dormitory community of about 6,000 people. The majority of its workforce found gainful employment in Montreal, that is, when they could find it.

There were a great many corporate failures in the early thirties, and lay-offs among the surviving companies, as factory output shrunk to match everyone's scaled-back buying power. Finances were slim in my own family. My Dad never lost his job because he was in one of the few growth industries – the telephone business. But he had two 10% cuts in salary through the thirties. Fortunately rents were correspondingly constrained and we moved in 1933 from an Old Orchard Avenue upper flat in NDG to a nice rental six-room house at 213 Edison Avenue for about the same price -- $38. a month. 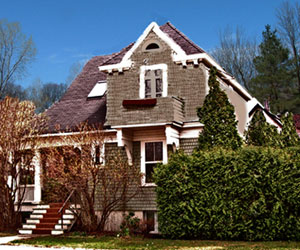 The advantages were obvious for a couple with one child (me) and hopes for more. The house was relatively spacious, having a large verandah on the front and ample grounds for lawns and gardens. The ground floor had separate living and dining rooms, a large kitchen and a generous hall, which was really mostly wasted space. Upstairs there was another large hall and three bedrooms. The basement was unfinished; workbench, coal bin, woodpile, laundry tubs and washer, plus the big old coal furnace with lots of piping to the radiators upstairs (in our day radiators were called “coils”). The house was situated in a lightly settled area of the “City of Beautiful Homes” with woods across the road and fields at the back. There was good transportation to and from the city, and the shops were less than a mile away.

So how did the great depression affect a child like me? My parents shielded me enormously from any obvious effects. As I look back, I remember how long a term of wheedling it took before I could be bought yet another of my favourite Dinky Toy cars. I believe they cost 60 cents then. If I had one in mint condition now I could ask hundreds of dollars for it. They were made in England so the stock dried up as the war progressed. My choice models were the 38-39 USA designs (Oldsmobile, Lincoln, Studebaker, Buick, Packard), but I also favoured certain UK designs (Lancia, Jaguar, Aston-Martin, etc.).

Another effect of the depression was the constraint on travel, which I didn't really notice at the time. Whenever sufficient dollars could be rounded up some of the family went by train to Nova Scotia to visit the former homes and current relatives on both sides of the family. The usual route was over the CPR line through Maine to Saint John NB and then aboard the Princess Helene ferry to Digby NS. We sat up at night because sleeping cars cost extra. We took low-cost farm vacations in the Laurentians, traveling north by train, and made summer visits to our cousins in St.Eustache-sur-le-lac. Auto trips were out of the question because we didn't have a car, gas was severely rationed and new tires were virtually unobtainable. The occasional nickel ice cream cone was a special treat.

Our table was adequately supplied but never extravagantly. My parents liked fish so it appeared at least once a week. My brother and I disagreed with their taste but there was no option. The worst were calves' liver and cow's tongue. I could only ingest them by applying sugar first. In winter we had lots of root vegetables plus canned veggies. At some point, I don't remember when, Bird's Eye frozen peas appeared. Oranges were scarce and expensive, but before Christmas the stores received big shipments so that everyone could have one in their Christmas stocking.

All the ladies had to be thrifty shoppers. Things like Jell-O and bread pudding made regular appearances. Chocolate was pretty rare, except that at Christmas, a box of Moir's Pot of Gold chocolates usually surfaced.

Some of my earliest memories involve my brother, Brian, who was born in 1935 when I was 3½. I remember the Home Hospital where he was born. It was a former large house that a nurse, Miss Trench, had turned into a small hospital. The two English doctors in the town, Dr. Oulton and Dr. Brown sent patients and tended to them there. The location was on Victoria Avenue, just a few blocks from home. 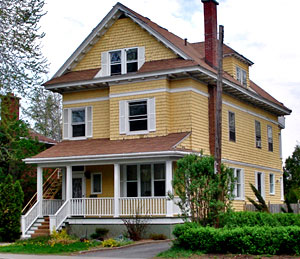 Then there was the time some child (oh, no, not me) let the brake off the carriage and both it and my brother went bumping down the front steps. My mother's panic was very impressive. Nobody died, or was even injured.

Of course, I remember the nearby trains from a very early age. The main CNR line from Montreal to the US border ran just behind the next house, and it was a busy route, especially during the war years. More about the trains later, when they really took hold of me!

Lorne Perry remembers Depression, War and Recovery in St. Lambert in the 30's and 40's