The first time I heard the sound of bagpipes I was playing in the marshes at the foot of Dulwich Avenue, a five-minute walk from my home. The marshes stretched over several acres of land - some of them treed, some covered in scrub brush and, of course, some filled with stretches of open water and bull rushes. It was a favorite place and later, at the suggestion of John Rosevear, our high school biology teacher, I frequented it with more regularity, seeking out tadpoles and tiny frogs. But it was when I was eight and playing hide and seek in the wooded area of the marsh, that I first heard the sound. It was eerie and I stopped, unsure where it was coming from or what it was.

Bugsy Walker, a friend who lived closer to the marsh than I did, enlightened me. “It's bagpipes,” he said.

“What are bagpipes?” I'd heard the word, but couldn't remember what it meant.

“Dunno,” Bugsy shrugged. “We hear it from time to time, but we've never seen anyone actually playing it.”

“Spooky,” I said. “And you have no idea where it is coming from?”

“Nope, we've tried tracking it down, but it seems to stop whenever we get close to it.”

As if on cue, the last of the wailing died and the woods fell silent. I resolved then not to play in the marsh after dark. Over the years we occasionally heard the Dulwich bagpipes again, but never at any predictable time and we were never able to locate their source. Later, I befriended Bryce Weir, the son of a Scots architect who'd recently emigrated to Canada. He was able to identify some of the tunes we heard, but had no more luck than I in determining who was playing the “pipes”, as he referred to them.

Whenever I was feeling fanciful, which was often when I was a kid, I wondered if it might be the ghost of a Scot, perhaps an early settler killed in the War of 1812. But my father said it probably came from someone in one of the big homes on Riverside Drive, homes that backed onto the Dulwich marsh.

“It could even be a recording,” he said, “Sounds can carry when they travel over water and there's a lot of open water in that old swamp.”

My dad had a practical answer for almost everything. He'd chide me for my “over active imagination” - something he said I'd inherited from my mother. I didn't think it was a recording. In time I'd come to recognize a pattern and it seemed the playing would often stop, then begin again, repeating the tune. As thoroughly as I searched the area I never came upon anyone playing the bagpipes. It always seemed to cease just when I felt I was close enough to solve the mystery.

Years later, when I revisited St. Lambert, I found the Dulwich marshes had been filled in and streets cut through the woods of my youth – streets with beautiful homes on treed lots.

I wondered if the owners ever hear the sound of the bagpipes. Probably not. There was no longer any open water to carry the sound. 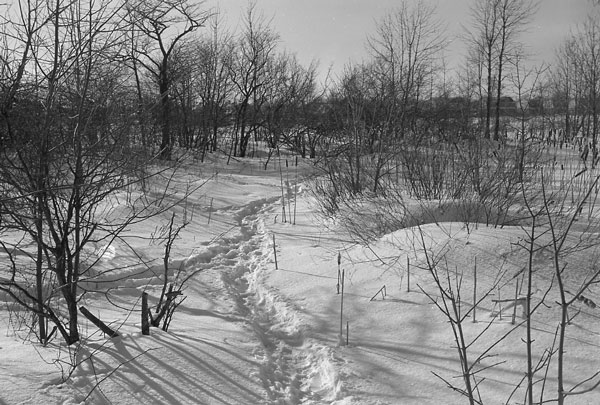 Winter changed things in the Dulwich swamp. We were able to get to places that were inaccessible the rest of the year. If we were lucky, and the water froze before it snowed, the many ponds became rinks, perfect for skating. We got in a good many pickup hockey games on this newly formed Dulwich ice. No equipment was required - just skates, sticks and a puck. We called these games "shinny" and they usually lasted until the first heavy snowfall. Even then, diehard devotees of the game would extend the season a few weeks by clearing the snow. These latter games usually ended when the last of our supply of pucks was lost in the snowbanks that defined the rinks. I never heard the bagpipes playing in the winter - I guess our phantom piper wasn't a hockey fan.