The Cobra Did It

This article is copyright protected and may not be used, in any form, without the express consent of Virginia Carter.

I didn't get to India until I was well along in life. That's because Dad forbade me to go. He had spent almost 3 years in India during WWII and, while he had learned many things and had many experiences, he also almost died, which may be why he had a jaundiced view of the country.

Dad went to India when he was in his 30's as works manager of an Aluminium plant, the building of which he was to supervise in Alwaye. He took a train from Quebec to Los Angeles and one of the new fangled clipper ships from there on out. Mom, Joan and I were to follow when he had things set up for us. Trouble was the Japanese got nasty and bombed Pearl Harbor, thus closing our route to India. Dad then got typhoid and of 14 people going into the hospital with the disease at the time, only 2 came out alive. Dad was one of them. He told us with real ferocity in his voice “Never, never go to India”. I didn't until he died, and then I went.

Most of my friends will recognize the truth of my observation when I say that I am not terribly concerned with fashion. But India, the trip, the special need for dress since I was to do a formal presentation to radio writers for the Population Media Center, all called for some upgrading of my wardrobe. J.O. joined me and we found just the things to deal with moderate formality in such a climate. Raw silks, linen skirts and slacks and so on. I LOVED the clothes, most particularly a thick silk blouse the price for which I excused on the theory that it would last a life time. 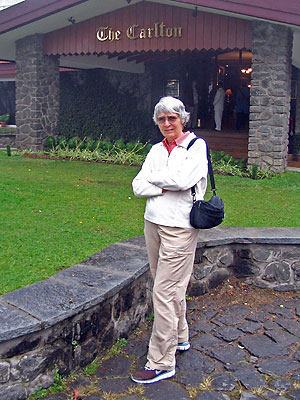 Despite travel to many distant places, India came as a shock. I flew into New Delhi, arriving just after midnight. A dear friend and founder of PMC was right there at that bleary hour to meet me. We wended our way through dimly lit streets, cows, and sleeping bodies splayed out on every tiny space along the road. The hotel was grand and after a 12 hour rest I went to work with writers from around and about Northern India, preparing the way to do a dramatic radio series. It was to be broadcast in Hindi to an audience in North India 4 times the size of the entire USA.

We met at the offices of All India Radio. The temperature rose into the hundreds. The power, and thus air conditioning, failed constantly. The toilet was a squat version with ceramic foot rests, in a tiny closet lit by one 20 watt bulb. How Indian ladies in trailing saris manage in those spaces I will never know. Perhaps that's good. When power failed, falling into the pit was a real possibility. Cables ran down hall floors struggling to bring power where needed and a big sign in the main hall read something like this:

“If anyone sees an unauthorized person or thing, smells a noxious odor or sees a despicable thing, kindly report it to the authorities immediately.” 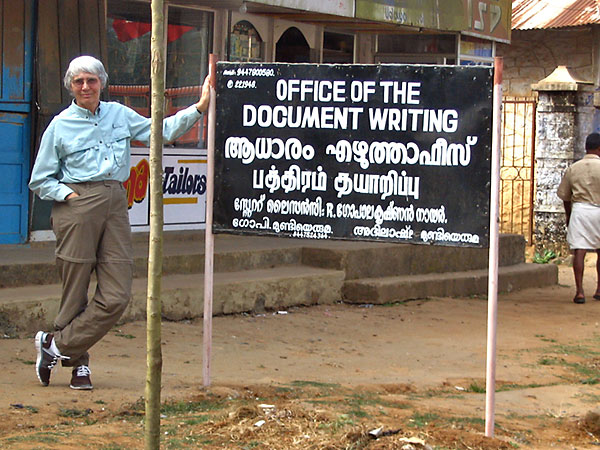 The writers and staff could not have been nicer. Somehow we ended up with a set of dramatic characters patterned largely after my father's relatives from Southern Ontario. Draped in saris who could tell? People are people after all and my Dad's relatives offered plenty of soap opera fodder. “Oh Dad, what must you be thinking, I'm in dreaded India and have made infamous your stalwart family from Canfield, Ontario!”

When the weekend arrived it was time for a break. I consulted the concierge at the hotel and arranged a car and driver to take me on a tour of Delhi. For company I invited my Nairobi pal Kimani, a fellow trainer with PMC. Kimani earned his PhD in linguistics from Princeton while on a full scholarship there. He picks up languages like I pick up mosquito bites. He is so black of skin that he disappears in photos, recognized only by the absence of a face where one should be. Muttering good humouredly to himself in Hindi, Swahili, Cantonese and English we set off to see the sights.

First stop was Gandhi's tomb. It is a small walled garden with a flower seller sitting just at the entrance. For pennies I bought a cupped dark green leaf filled with pink flower petals, entered and stood before Gandhi's grave. Directing my thoughts towards world peace I lay the petals down among all the others and backed away. 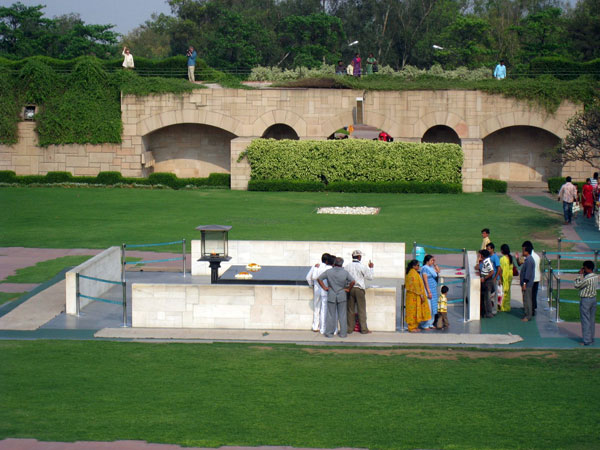 It was hot. As we made our way out I spotted a sight so familiar I could hardly believe it. An Indian man was sitting cross legged in front of a wicker basket. He was playing a flute and a cobra had risen up out of the basket and was waving its hooded head back and forth to the tune. My Dad had taken that exact picture in the 40's and we kids had puzzled over it for years hearing him tell how it was that such things were. That has to explain why I felt so comfortable with the entire scene. 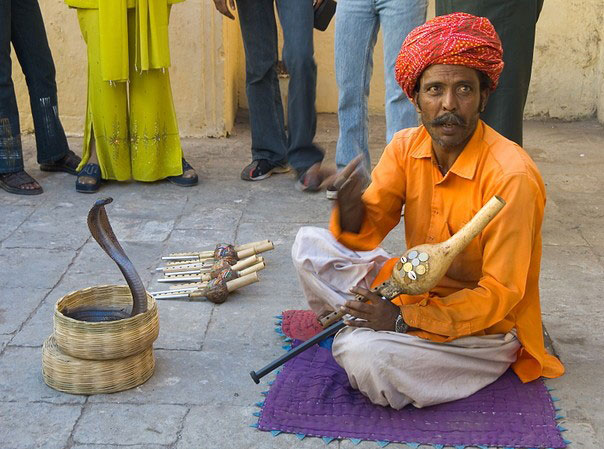 The cobra man beckoned me over. I took a picture, man, cobra, basket, a duplicate of my Dad's. Then in sign language the man offered to have me pose with the cobra. OK, I'm not afraid of a cobra. Kimani took my camera and lined up a shot and the man draped the cobra around my neck, head up next to mine, body around my neck and tail draped down my front (remember my new thick silk blouse?). The cobra's skin was scaly and cold. The head had a hood, what more can I say. I felt fear happen and then I felt something else. A sort of warm liquid something wandering down my front. In hind sight I realize that the cobra got frightened at about the same time I did; so frightened that it lost control. Kimani got the picture and so did I. One glance showed a greenish kind of slurry making its way down my silk blouse. Looking up I saw and heard a throng of kids doubled over with laughter, Kimani looking dazed and the cobra disappearing into its basket as its master carried it rapidly away.

Times like these test a person. There were three choices, to laugh, to cry or to kill myself. I chose laughter which brought grins of relief to Kimani, the kids, and a peddler of cold drinks at a stall nearby. He ran over with a rag dipped in soiled water and tried to mop me off. How shall I describe the silk blouse…perhaps not. My purse had saved the blouse from worse defilement, which only means that my purse was a goner too. After much mopping and muttering, and no more consideration of world peace, we made our way back to the car.

Oh the stench! I had seen “an unauthorized person or thing and smelled a noxious odor”. A whole day of touring various Red Forts, Government Building and Old Delhi streets with essence of cobra floating around me like a cloud, was a test of character I am proud to report Kimani and I passed. The only saving grace was that we were, in fact, touring in India where redolent odors are unworthy of comment. Back at the hotel after one of the longest days of my life, there was only one course to take. To my room, a full strip and everything thrown into the shower, there to slowly disintegrate of their own juices. My silk blouse, the love of my life, had lasted less than a week.

Later I phoned J.O. to report on my day. The phone bill was $190, most of which paid to hear her laughter transmitted half way around the world. Choking back tears she kept repeating that I had lots to be proud of, after all, despite an incredibly good reason to do so, I didn't lose control of my sphincter, the cobra did.