The Cavendish Tea Room, AKA The Cave

Say the words “Cavendish Tea Room” to most folks and they conjure up an English countryside inn where Earl Grey tea and scones are served with fresh strawberries and clotted cream. The music, if there is music, is classical – maybe string quartet – subdued, playing in the background. But to a generation of teenagers who attended high school in St. Lambert in the forties and fifties The Cavendish Tea Room had a different meaning. The menu featured hot dogs, hamburgers, French fries, and soft drinks or milkshakes. The music, blaring, might feature the songs of Frankie Laine or Vaughn Monroe or the big band sound of Louis Armstrong.

We never referred to this little fast food restaurant (a term we didn’t use then) as The Cavendish Tea Room. To us, it was simply The Cave. But the official name, written on the front window, was there for anyone who cared to look. I wonder if the original owner had an English tearoom in mind when it opened. Whatever its history, by the time the Second World War was over, the Cavendish Tea Room was owned by a Greek named Tom. I never learned his last name. He was just Tom or The Greek. He was middle aged, balding. He wore a soiled apron and the resigned look of a man whose business depended on the unpredictable behaviour of teenagers. Tom could be tough, though, and if there was trouble you quickly found yourself out on the sidewalk.

The Cave’s location, across the corner from the old high school, made it the epicentre for teen-age gossip. It was close enough to reach at recess, where we could grab a smoke, something forbidden on school grounds. In The Cave you discovered which couples had broken up, which couples had made up and which couples had switched partners. It was where you lined up dates for the weekend – a movie on Friday night, the Saturday night dance. It was where you learned what went on in classrooms other than your own that day. A practical joke was news. We wanted to know who acted up . . . how serious the crime was . . . the terms of punishment. A simple detention rarely merited a mention, but if you were sent down to the office to see the principal it was big news. And if you were strapped or suspended it was even bigger news. You learned all this in The Cave.

The layout was simple – you entered through a main door on Green Street and there were booths along the wall to the left, with stools and a counter stretching the length of the room to the right. Behind the counter were shelves that held smokes, candy bars, potato chips and other junk food (only in those days the words “junk food” hadn’t gained popularity). There was a jukebox at the far end of the room and beside it a door into the kitchen. It was in this kitchen where Tom grilled his burgers and hot dogs and created his pride and joy, his own invention – the Tomsicle. Popsicles were popular back then, but Tomsicles were cheaper. Tom made them by freezing an orange drink in a Dixie Cup with a wooden stick embedded in the middle. You rolled the cup a few times with your warm hands to free it from the cup, extracted the Tomsicle by the stick and had a refreshing treat, particularly on hot days. Since Tom depended on teens for his business and teens weren’t in school in the summer months, these Tomiscles drew us to The Cave in July and August. The Cave was also close to the two local movie theatres, The Astor and The Victoria, so we often made our way there after a show. 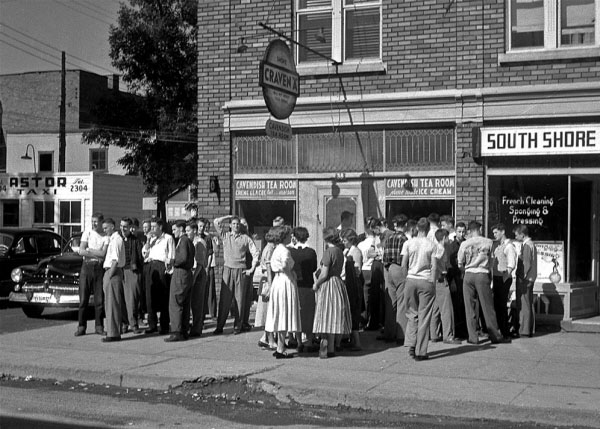 But it was the recess scene that made The Cave special. In winter it was packed and smoke from Sweet Caps, Sportsman or Buckingham cigarettes filled the place. Music might be playing, but it was hard to hear above the sound of raucous teenagers liberated from the confines of the classroom. If you were late arriving, you huddled outside The Cave, hands jammed in pockets, cigarettes dangling from lips. As the weather improved the crowd outside grew and you went inside to buy smokes or a coke. I guess every small town has its Cave and they all have special memories. To us, it was a sanctuary, a place we could call our own. Teachers never ventured into The Cave and the only adults we saw, aside from the owner, were deliverymen bringing in provisions. 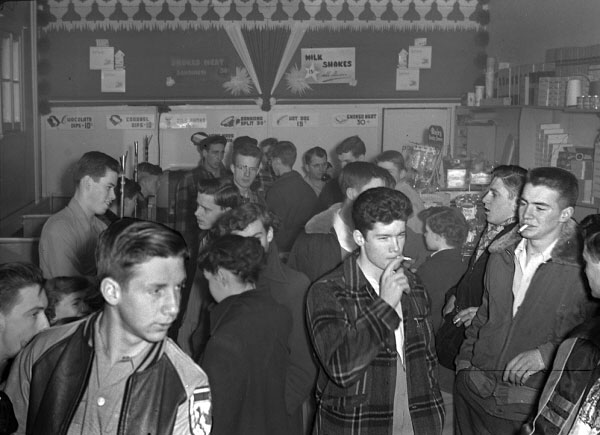 Identified in this picture are: In the back - John Green, Bruce Walker and in the front left to right - Stewart Fickett, Tom Carmichael, Harold Bales, Jim Dawe

I graduated in l953 and a year later they opened a new high school, many blocks away from The Cavendish Tea Room. I’m sure the students benefited from the improvements the modern school provided, but I wonder what replaced The Cave in their lives. And I wonder what happened to Tom, the Greek, when most of his customers disappeared. The new school was far from any restaurants or candy stores. I’m sure in time a substitute was found, a place for teens to hang out, but I doubt it had the convenience or the ambience of our place – The Cave. It was an institution to my generation, as important as the pool hall, Roy’s Tavern, Saturday Night Dances at The Pit, the outdoor rinks and ball fields and the dozens of other favourite places we all had, where our own special memories still reside.