Most of us air force kids who had fathers stationed at Air Defense Command, St. Hubert, Quebec back around 1958-60 had a number of options for our secondary schooling. We were privileged to get an education. Many of us took our schooling on the airbase for school grades up to the end of Grade Nine. Thereafter we had to go to either CCHS in St. Lambert or to Montreal High to complete our Matriculation.

I don't remember too much about school on the airbase except for leisure time. We had access to the bowling alley where I used to make extra money manually setting bowling pins. My father ran the wood work hobby shop in his spare time and managed to lob off a small part of one of his fingers cleaning the electric planar at the closing hours. I used to throw many basket balls through the hoops at the military Gym and buy snacks at the canteen in the Gym. Both my brother and I played hockey at the arena on the airbase and took the usual hockey tournament tours. I was a member of the # 643 Air Cadet Squadron, St. Hubert and went to several cadet camps. I was promoted up to a Flight Sergeant and enjoyed the drill competitions. I lived off base in Ville Jacques Cartier about 4 miles north of the base towards Longueil and Montreal. One summer, just after arriving from Whitehorse Yukon, I was very bored sitting around helping my Dad put a basement under a house we had jacked up in Ville Jacques Cartier. We were modernizing the place. Some of the kids from the air base found their way to my place and invited me to play softball with them on the air base ball diamond. We played softball all summer long in an organized league. It was very nice of them to come and get me! I remember people on the ball diamond like Roy Stokes who was a tall thin gangly kid and Reggie Tremblay who had big biceps, a brownish skin dark haired lad who could hit home runs very regularly with his big muscles!

While in Grade 8 on the air base I recall three things most distinctly. One was that in Grade 8 I had a seat that faced down the hall towards the Principal's office. I could see my younger brother Eldon from Grade Five and another kid marched in to the Principal's office to get the strap for breaking a number of windows in an abandoned hangar building on the airbase by throwing rocks. The first kid wailed his head off. When it was my brother's turn one could hear the strap but no sound at all. I also recall that I had just come down from Whitehorse Yukon and I found it very difficult to get the hang of learning French! Another time, a year later in Grade 9 at the air base school we had a Mr. Johnson, a stout medium built man in a gray suit with a round face, for a teacher who took us on a field trip to Montreal in 1957. I will never forget how memorable it was. We visited a Chrysler dealership and saw all the modern state of the art push button transmission cars such as Plymouths, Dodges and Chrysler Desotas. They all had these incredible tail fins as well as push button transmissions.

The Vickers Viscount, the world's first turbine-propeller airliner, was introduced by Trans-Canada Air Lines on April 1, 1955 on its Montreal-Winnipeg route.

The Lockheed Super Constellation a giant in its day - was used by Trans-Canada Air Lines on long distance routes.

We then went to Dorval airport and visited Trans Canada airlines (now Air Canada) where a senior air stewardess showed us around and inside a tri-tailed 'Super Constellation or "Super Connie" which Trans Canada used for Trans-Atlantic flights. It was roomy and had curtains on the windows. It was a very slick polished shiny aluminum 4 engine prop plane and the forerunner of the Vickers Viscount, Vanguard turbo prop passenger planes and later pure jet Douglas DC-8. The Air stewardess had a long career with the airline. She had married a Trans Canada Airlines pilot who died in an air accident somewhere.

Later I had heard Mr. Johnson unfortunately was dismissed from the school on the air base for unusual behavior but it was kept very discrete. We also had another much older teacher who always wore a black and white tweed jacket and a bow tie who taught us math on the air base. He always told us to invest in ABITIBI Mines and Paper Company. I think his name was Mr. Botts? I was an unusual student at the air base school and later at CCHS as I took Latin for all those years and at the end I was the only pupil in the class. In later life Latin helped me with Roman and Greek classics, every day English and in many general ways. 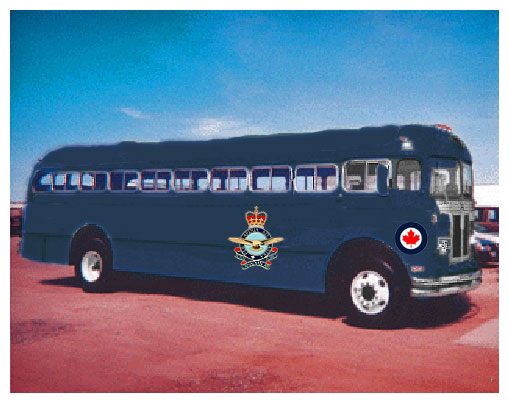 The air force Western Flyer big blue 50 passenger bus, with its flattish and slightly rounded front end, round roof, small wind shield and mechanical door opener was our chariot to High School at CCHS. It used to pick up a dozen or so kids up from the airbase at ST Hubert around 07:30 AM and dropped us off at the CCHS school steps before 8 AM. The air force bus was never very full and it never broke down! I used to come to the air base with my father in the early morning, catch the bus to and from CCHS and then drove home to Ville Jacques Cartier after 4:30 PM each day with my father after work. I think at that time Elvis Presley had just started singing on the Louisiana Hay Ride. I think most of us air force kids felt very privileged to be able to have such wonderful and reliable transportation. I recall the kids on the bus were well mannered and did not do too much horse play on the 25 minute ride to CCHS. I am not sure the bus system worked too well if Mr. Roy Kennedy decided to keep us after school hours to finish our math homework which he often did. 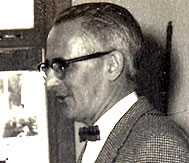 Mr. Roy Kennedy in 1960 Most of the time Mr. Kennedy would just crack his wood pointer stick on our desks which made a thundering noise to make sure we were tuned in to his lofty Algebra and Trig formulas! He also reminded us very often and with great regularity that he was from Acadia University. I recall taking 4 math courses in the grade 11 year from Mr. Kennedy. These were Algebra, Trigonometry, analytical geometry and regular geometry. It was wonderful for the grade point average for people like me who took maths, chemistry and physics and who were less capable in English and English literature. I am not sure how we handled the situation where we were kept after school sometimes but I am sure the air force bus did not wait for us latecomers as it had a schedule to keep. I think our parents had to drive to the school to pick us up if we missed the Western Flyer.

I never had many embarrassing moments at CCHS except I recall my Dad always paid for my monthly fees of $ 4.50 with a post dated Bank of Montreal cheque. To ensure the cheque was never mistakenly cashed early he always stamped this big hand with a large ugly finger pointing to the date. I felt a bit awkward turning that cheque into the CCHS secretary's office every month.

I had many close friends from those bus days and I regret not keeping in touch. I recall Nancy Jean Rattee was very close to me in St. Hubert and we had skated on the ponds and around the bonfires on the frozen ponds of the Yukon. We air force kids used to get supplied with air force fleece lined leather flight boots with a zipper in the front in the Yukon where the winters were very cold. She used to sit in front of me at CCHS at St. Lambert in Mr. Kennedy's math class in one of those white wood student desks with the inkwell in the front right corner with her white blouse and gray skirt and black penny loafers. I had never dated her because she was always pre-occupied with another friend and air cadet buddy, Bill Evoy, in those days gone by. She was a gracious young tall lady with curly black hair and bright blue eyes.

I was always a shy person and back then I never handled my emotions too well. I never really learned to dance or how to date until I went to civilian college. I was awkward around women. I guess my life core activities in my teenage years was mostly hockey and air cadets outside CCHS studies. This is not a confessional but my parents who are now passed on never fully prepared me or my three siblings on how to handle ourselves in a very complex world where personal inter-relationships are important, or how to handle emotions, or how to handle success and failure. We, in my family grew up unfortunately as robotic law abiding creatures without much emotion. We just never went to boot camp on these social science subjects in the early days and it took us three quarter of a lifetime to become warm people with compassion and understanding of human beings. The recent modern expression “it is OK to be human and make mistakes” has really affected me in a positive way. Before that I was always a formidable person. Max Phillips was another friend on that daily bus ride.

I think because of the modern computer and Internet facilities we can track down almost any people from yesteryear fairly easily. Back then, before the advent of the computer and development of the Internet starting 1986, it was not easy to locate people.

Now my understanding is St. Hubert air base is now a civilian airport and also the home of the Canadian astronauts and space station industry!

Those were wonderful memories!

Notes: RCAF Station St Hubert was a Royal Canadian Air Force (RCAF) base in the Montreal area, prior becoming part of CFB Montreal upon unification of the Canadian Forces in 1968. In its heyday as an operational Air Force Station, it was host to two CF 100 All Weather Fighter Squadrons, and two Air Force Reserve Sabre squadrons, in addition to being the host station to RCAF Air Defence Command Headquarters. The building later served as the Force Mobile Command Headquarters site until the base was decommissioned by the Canadian Forces in the mid 1990s. The airport remains in use as Montréal/Saint-Hubert Airport.