Hi CCHS Alumni, and especially the class of '53.

I was struck by a wave of nostalgia. There I was lying on my back in the pool on the ms Noordam in the Mediterranean heading for Croatia not thinking about much, but it suddenly came to mind that in a few weeks my sixty year mark since graduating from CCHS will end. Amazingly, I can't remember what I had for breakfast, but I remember 1953 at CCHS as if it were yesterday.

The first thing that came to mind was the production of the year book. Mr. Templeton, the principal, informed the class that the school did not have the money to print the year book. We asked him to investigate any and all possibilities and he did come up with a solution but it was going to require the class to manually paste page layouts using random pre-printed text and photos. We were warned by the printer that it would be a lot of work, but the class quickly decided to each take a section and prepare content and then do the page layouts when we got the drafts from the printer. Stuart Fickett and Jocelyn Kerr did sports, Betty Brooks and Ruth Townsend did the elementary section, Beverly Collins was the graduates editor, Florence Perrier was the French editor, and Lois Hashek was the English editor. Bryce Weir and Murielle Fraser did the art work, Andy Little did much of the photography. Shelia McPhee, and Jack Stiles, were the exchange and alumni editors. 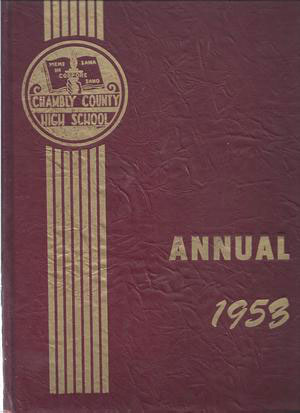 The year book had a hard cover bound in a vinyl to look like leather. 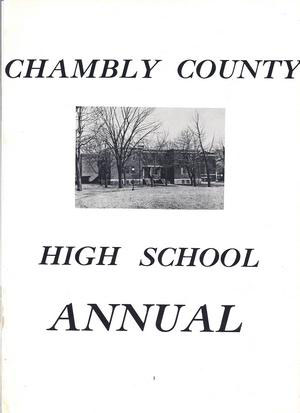 The inside cover that includes a picture of CCHS high school. 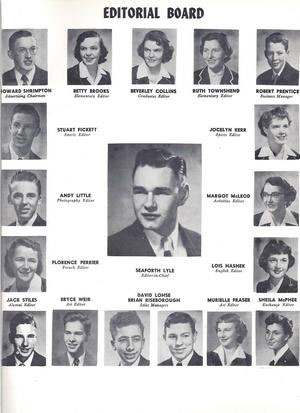 The page showing the Editorial Board. 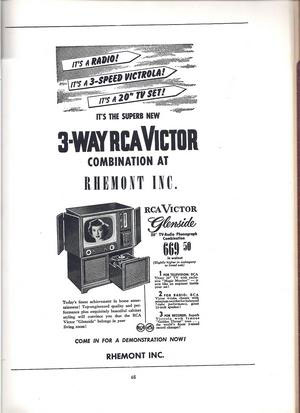 A full page ad that really shows how far technology has progressed.

We knew from the getgo that paying for the publication was going to be critical so Howard Shrimpton took on the task of advertising manager and with the help of David Loshe and Brian Riseborough as sales managers, and Robert Prentice as business manager contacted almost every company and store in the Chambly/St. Lambert area to sell advertising. Every ad was appreciated, but we did celebrate when the guys brought in full page ads.

It was a great group of hard workers and I guess they figured I would be less disruptive if they made me editor-in-chief. It was hard work, but fun, even if we did have glue all over the place. But what also helped were all of the other members of the graduating class that did their share of cutting, formatting, pasting and collating.

The end result was a 92 page year book that was not only a good read, but also a reminder of how well the class worked together.

One of my other activities was much less work and a whole lot more fun. I was Master of Ceremonies for the school dances. But as it turned out it had an upside beyond being the dance DJ. A piece called "It's in the Book", six minutes long, became a huge hit at the dances and everyone wanted to hear the complete six minutes without interruption. With today's IPods and MP3 players no big deal. But back in 1953 singles came on a record with 3 minutes a side. Buying a second record to sequentially play side A and then side B without interruption wasn't the issue, but how to convince the school to buy a second record player and then figure out how to modify the PA system for a two player input. We did it. It was a precursor of the electrical engineering that was to come later.

To round out my graduation year I was vice-president of the class, while Bryce Weir was president. He did all of the heavy lifting which left me plenty of time to get a taste of student politics.

That, and the CCHS experience served me well as eight years later I was elected as the President of the Students Union at Imperial college in the University of London in England. That really was a full time job with a balance sheet with millions of Pounds in assets as the Union owned all of the student residences, a boat house on the Thames, multiple sports fields around London, and sports equipment ranging from soccer balls to glider airplanes, and the best part a 15,000 bottle wine cellar. One of the fun tasks that went with the office was to be the Queen Mother's Escort (read flunky) for the University of London's Foundation Day that started at Westminster Abbey in the morning and ended with a formal ball in the evening. As protocol has it, that was the first time as a commoner I was allowed to talk to the Queen Mother. That day could be a story all to its self, but that is for another time.

Looking back on CCHS, it gave me a great foundation for getting a couple of university degrees, prepared me for a successful business career, and more importantly set me on the course to have 50+ married years with two great kids (both also graduate engineers) and three fun grandkids, and so far the health to enjoy it all.