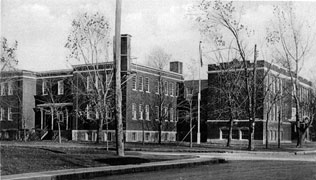 After Grade 4 we all moved to St. Lambert High School for Grades 5 through 11. Grade five was kind of hard for me and then grade six was a breeze. I remember Miss Dolena Smith as being a rather ordinary grade 5 teacher, while Miss Elliot (later in the year she became Mrs. Darley) excelled in grade 6. We started French in grade 5, Miss Ippersiel being the specialist. She was a Parisienne and gave us a good grounding in Français Internationale. Of course we modified the old World War I song so it came out this way "Mademoiselle Ippersiel, parlez-vous?"

Sometime along the way the school equipped one of the spare indoor recess rooms for Woodworking with all the proper power tools. Mr. Hughes, the janitor (long before there were caretakers!), became our first teacher. I use the term teacher loosely because he could only teach by demonstration. If you were smart enough you emulated his techniques and if not, you failed. However, he was good at rescuing projects by doing much of the work himself. He did have good projects to assign. I made a shoebox with a hinged half lid, which had a shoe form on top when in the open position. I used it for many years but eventually it disappeared in a move.

Another project was a bowl turned on the wood lathe. I dug the chisel in a bit too deeply and chipped off the points of the screws that held my bowl to the lathe plate, but the resultant holes were soon filled with plastic wood.

Miss Johnston was the grade 7 tyrant. We called her “Sarge”, of course. She was very strong on arithmetic (as math was called then) and her favourite punishment for misbehaviour in class was to make us stay after school and do terrible long division problems. For example: 1,376,597,289 divided by 7,697. When this was solved to three decimal places, it had to be multiplied out to arrive at the original ten-digit number. We went home after dark. I can't remember anything else we were taught that year, but I can multiply and divide (now that calculators have made it unnecessary).

Jessie Cockerline headed up grade 8, and this was the year I achieved my best results. She introduced us to algebra, which suddenly made sense out of all the arithmetic with which we had been struggling. Simple logic appealed to me whereas rote learning was a bore.

Mr. Brigden was my first male teacher, and Grade 9 was the first post-war grade. Maybe he had been in the military; I never knew. He intoned his homework instructions this way: “Read, mark, learn and inwardly digest”. I have never forgiven him for one time pronouncing “height” wrongly in a spelling test. He added a clear terminal “h”, and of course, I wrote it down. This gave me a 98 instead of the coveted 100. Someone had even asked him to repeat it, and he did, making the same mistake again. It was probably the way he had learned to say it as a boy.

By grade 10 we were starting to have different teachers for different subjects and some of them stayed on into grade 11. Miss Ray taught world history in a boring manner, with lots of dates to memorize. I couldn't keep them straight and earned even poorer marks in history in grade 11 than 10. But in order to cram for the grade 11 final I took my big fat history book to the train station, sat on a baggage cart, watched trains and studied dates. My final mark was not great but a clear “Pass”. Probably Miss Ray had been marking harder than the Provincial scrutineers.

Mr. Reginald Carson tried to teach us trigonometry but he wasn't very good at it. Miss Burton was in charge of English, and Mr. Templeton (later the principal) looked after science. High School divided everyone into either Latin or Science. I chose the latter. A joke in the Annual asks a student the question, “What is the greatest achievement of the Romans?” His answer: “I'd say it was learning Latin”. Mr. Amyot was the French specialist in high school. Ian Hume, the Phys. Ed. leader, was a dedicated coach to the many sports teams. At some point we also had Mrs. Taylor (superb teacher) and her sister, Miss Montgomery (who was awful).

The school Annual for 1949 lists me on the Annual subscription committee. I don't remember much about that but we did solicit orders from our classmates and handled the cash that came in.

In grade 10 everyone was on the grad team. I participated in decorating the stage. At the end of Grade 11 we were the stars and it did feel good to parade across the stage and receive a Provincial certificate. “No more pencils, no more books, no more teachers' dirty looks”.