Days are getting shorter and colder, trees are dropping their leaves by the bagful (or 10) and soon we'll be up to our knees in snow (I was going to say some other part of the anatomy but Angus would censor it, besides, with global warming it doesn't really get that high any more). Even the most ardent golfers, at least in Quebec, have put away their clubs and snow birds are planning their annual trek south. Those of us left behind, who don't ski, or play hockey, actually look forward to this season - its time to head back to the Curling rink. I stopped counting long ago but, I think it will be my 48th year.

The concept of curling in St. Lambert started in early 1954 after Harold Atkins, columnist and Sports Editor, and George Clark (1932), of Clark Travel fame, attended a Canadian Legion get together at St. Anne de Bellevue Curling Club. Based, no doubt, on the good time they had on the West Island and fuelled by traditional Curling Club hospitality (read that as several scotches), they decided the time was ripe for a Club in St. Lambert. It took only 18 months from that humble beginning to solicit members, raise funds, select a design and put up the buildings until the club opened in October of 1955. The Oak Street facility was patterned after the Cap de la Madelaine Curling Club and featured a three sheet ice shed, comfortable club house with a bar and full kitchen and locker rooms in the basement. It also had a second floor viewing area which served as a Board Room, Trophy Room and overflow space when the parties were exceptionally large (this happened frequently).

The connection to CCHS was almost immediate and School "Boy" Curling started in the winter of 1957. Yes, we were sexist in those days and only the CCHS male students were allowed on the ice. The club did admit women members right from the start but, they were relegated to curling during the day or on weekends in mixed competition and could not own shares and had no voting rights. It took another 15 years before women were allowed to play on weekday evenings, which was considered prime time and used exclusively by the men. Now, of course, there is equality for all. Women curl in what used to be considered exclusively male events, sit on the Board of Directors, own shares and of course, for the privilege, now pay the same membership fees as everyone else.

In the early years Henry Welburn was the CCHS coach and the school's liaison with the club. However, most of the serious coaching fell to Harry Poulton (Tom's dad) who was an accomplished curler in his own right. He drove teams throughout Quebec to various school boy bonspiels. Harry was also a bit of a rebel as far as Quebec Curling establishment was concerned. He taught all of us the long slide and heavy takeout which, at the time, were frowned up upon by a lot of the older members. If truth be known, some of them probably didn't want us around.

By my count, 10 Past Presidents have been graduates of either St. Lambert High or CCHS, ranging from Bob Smiley (Class of 1937) to Hazel Milley (Class of 1970). Hazel is still a very active member with the Lady Evening Curlers and last year was co-chairperson, along with Wally Charron (Class of 1939), of the club's 50th Anniversary Committee. Bob and Wally are the two oldest St. Lambert grads at the club and are still active curlers who can be seen most Saturday mornings out on the ice.

A curling club is, in some respects, like a golf club, there are members who are exceptionally good at the game as well as extremely competitive and others with various skill levels who, while competitive in their own right, are more interested in the game as a pastime. CCHS has produced several in each category. And, at the risk of offending a few people, here are my thoughts on some of the best.

Gary Colby (1962): Probably the most accomplished and successful curler the club has seen. He won the club championship more times than any other member and I doubt his record will be touched any time soon. I played on Gary's team for several years in the mid sixties and was always impressed with his shot making and overall knowledge of the sport. Gary had to give up the game several years ago because of bad knees and sadly he passed away last year. Gary's two sons Eric and Tim both play but not in St. Lambert. Tim is at Glemore in Dollard des Ormeaux and Eric curls out of the Mont Bruno club.

Frank Mellish (1957): The best curler CCHS produced for several years (until Gary came along) curling out of St. Lambert and the old Thistle Club on Fort Street in Montreal. He was always competitive and had a lot of success outside the club at the Provincial level. He gave up his Thistle membership and returned full time to St. Lambert and was Club President in 1977-78. Sadly, Frank also passed away a few years ago.

Jim Groundwater (1959): Another very accomplished shot maker who knew the game inside and out. Probably the club's fiercest competitor and someone who hated to lose.

Tom Poulton (1962): Tom curled for many years with Gary Colby. I don't know if he is still active in the game and last I heard he was living in the Brome Lake, Knowlton area.

Don Montgomery (1954): A good, determined competitor who used to get so keyed up before a big game he made himself sick.

Bruce Atkins (1961): Bruce was an extremely accomplished Junior Curler. He moved to the Boston area (in the late 70's I think) and last I heard was still active in the game.

Mark McClory (1987): Mark was another very accomplished junior curler who did extremely well at the Provincial level. As far as I know, he is not still involved in the game.

Lyndon Maize (1968): No longer active but a good shot maker and strategist. He played his best when the game was on the line.

On the distaff side the following people come to mind:

Barb Maguire (Duhan) (1950): Now living in the Ottawa area and I think she is still curling.

Sue Haigh (Chisholm) (1962): Now living in the Toronto area and I believe she occasionally still gets a game in.

Janet Fontaine (Lang) (1974): Still on the South Shore but not active in the game. However, her husband Dan is a long time member and was on the Club Championship team last year.

Hazel Milley (1970): A very competitive player who has also been on the Board of Directors of the Club for many years and served as President in 1992/1993.

The St. Lambert Club was renowned throughout Quebec for its hospitality as well as its curling and was the scene of countless, memorable dances and parties - a good way to ward off the winter blues. It was and still is a second home for many, especially retired seniors, who get in 3 or 4 games a week. They not only enjoy an in-house league but, in addition a thriving interclub competition with several Montreal and South Shore clubs.

On January 3, 2002, a devastating fire completely destroyed the club house along with all trophies, historical records, photos and curling equipment. It was blamed on an electrical short circuit and started late at night during the holiday season and was out of control by the time the fire department arrived on the scene. While the club house was gutted, the ice shed survived relatively intact.

Rebuilding took almost a year and a shortfall in the insurance payout meant that a second floor viewing area had to be abandoned. But, they did some creative and interesting things with the basement space resulting in better locker rooms and a very functional board room/meeting room. More importantly, the hospitality and camaraderie still thrive and the club is back on its feet looking forward to another 50 years.

I couldn't find many photos but, here are a few pictures with St. Lambert High and CCHS grads that have been active in the club. - yes folks I managed to include 2 of myself. 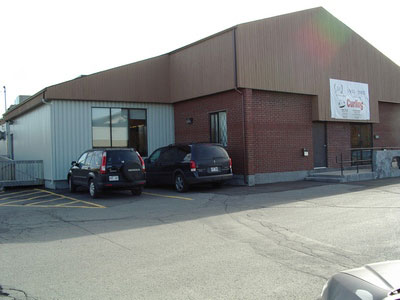 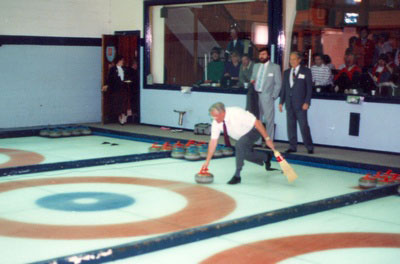 Wally Charron (Class of 1939) delivers opening ceremonial rock at 1989 Curl-In. Wally was largely responsible for creating the St. Lambert Curl-In that, in its prime, was the largest Bonspiel in Eastern Canada. The club would take over the Hockey Arena for 8 days in late October and build 5 curling sheets on the ice surface. The event would routinely attract over 600 participants. 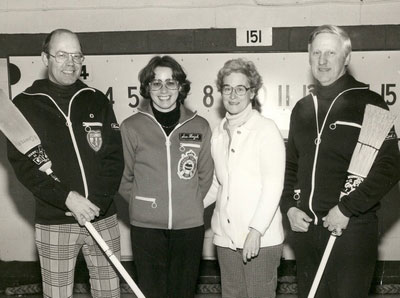 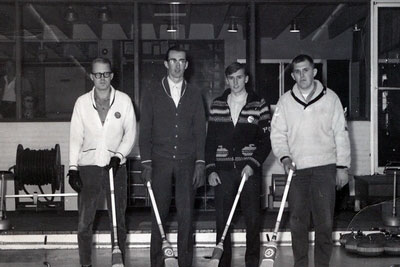 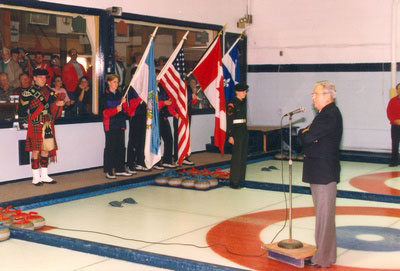 Mayor Eric Sharp at opening ceremony of 1990 Curl- In. Mark McClory (1987) on left with St. Lambert flag and skip of Junior Team. 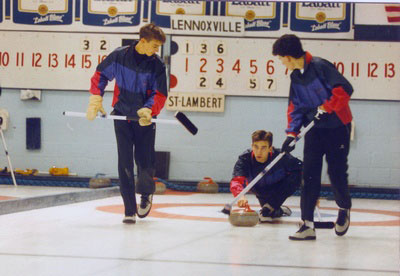 Senator Jim Munson (1963) is seen giving keynote address at 50th Anniversary Celebrations last year. Jim was in the CCHS school boy curling program but is not active in the game today. 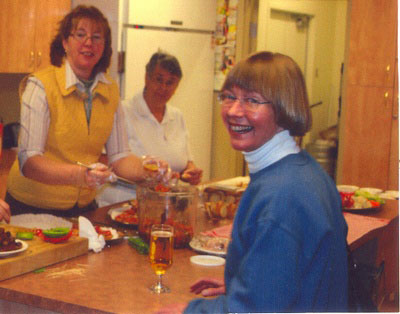 Hazel Milley (1973) takes a break and chats with Club members preparing food for the Anniversary luncheon. In the background is Roberta Landerman (Rawlings) (1952). The other person shown is Kathleen Parisi not originally from St. Lambert but her son graduated from Chambly Academy in 2003.

Response to article in November Newsletter

Always nice to read the articles on St. Lambert, before we arrived in 1963 and after. Keep it up. One clarification, could you let Harvey Carter know. In the "St. Lambert Curling a brief history" article,- the list of some of our best curlers...Mark McClory class of '87, His parents and mine have been and still are long time, good neighbours on Dulwich Ave. Mark is still curling, at different clubs in Que. As I write this he is the THIRD on the Eve Belisle QUEBEC MIXED CURLING TEAM this weekend in Kitchener-Waterloo. They are in first place with a 9-2 record, playoffs today and tomorrow. This is their second appearance in the Canadian Mixed Curling Championships.

PS. My father and I took Mark up to the club on one of those Dec 26th family days, we had him throw his first stone....he was 7 or 8. He hasn't left the game, I don't think he ever will!!