Warren Mackenzie is the Photo Editor of our Alumni Newsletter, Alumni Connection.

View all Flashbacks by Warren Mackenzie

What's new in St. Lambert? Quite surprisingly, a lot.

Recently we were very fortunate to have a close friend and former track star undertake a mini-reunion of those who competed in the St. Lambert CSA colours, under the coaching of Ian Hume.

52 competitors and spouses met for 3-days, staying at the ALT Hotel in Brossard. I should say nights, as most of our free time during the days Patti and I spent visiting firstly Preville where we used to live, then as much of St. Lambert as we could, into Old Montreal for a walking tour and a crepe lunch at the old Nelson Hotel in Place Jacques Cartier.

The many changes we noticed to have taken place in St. Lambert during the four years since our last visit were very surprising, and in fact, we both felt St. Lambert appears to really 'be on the move'. 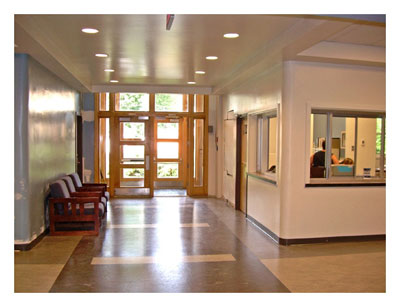 A view of the new main entrance to the former CCHS now Chambly Academy. The Alumni Association is a major contributor to the CCHS/CA makeover

So, what is new? We are all pretty well aware that the high school has undergone numerous alterations and additions during the past 4-years, quite a few undertaken with Alumni Association financing. We didn't go into the old (new) school but are looking forward to that come Reunion time next May.

Then, there are also new streets, new street lighting, new stores and restaurants, and the creation of a rather unique condominium complex.

City parks have been redesigned with very attractive gardens, and a couple with spouting fountains.

Arriving downtown, we just managed to find one spot available in the Public Parking area behind the former Ranger Hardware, as another car was leaving. The lots and streets were full everywhere else, most spots taken by the crowds of people strolling along Victoria Ave. as well as the streets running off. 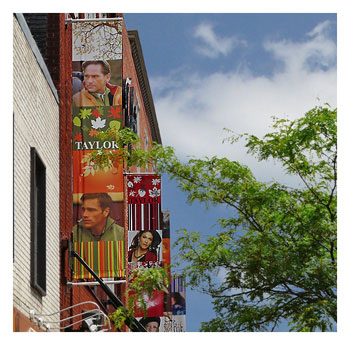 A view of the merchandise promotional bunting suspended in front of Taylor's Dept. Store.

A variety of new stores as well as several trendy and busy restaurants have located in the old buildings; Taylors, always a popular place, has gone quite 'up-scale' with advertising bunting hangers promoting their merchandise. Inside one sees nothing but the most up-to-date styles in all departments, along with one very charming sales clerk who worked for Ernie and Charlie when we were still in high school. 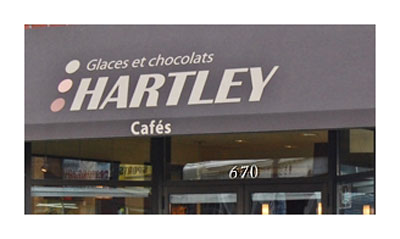 Hartleys began in the former Dupuy Lumber main office located at Prince Arthur and St. Denis, later moved to a back alley adjacent to Castoguay's Cycle, and now occupies large premises on the north side of Victoria Ave.

Another well-known facility to have undergone a complete makeover is the old Hartley Ice Cream store, which has moved to 670 Victoria Ave. and now produces fancy chocolate products and pastries in addition to a much larger variety of ice cream flavours, outranking Howard Johnson. We re-visited Hartley's a couple of times, just for testing, and one unusual flavour of ice cream Pat enjoyed was lavender.

A "Google Street View" of the new Waterman Condos at Bridge and Waterman Streets. Click here to see more about the Waterman development.

The Waterman building, located at the south end of Elm St., backing onto the former M. &S.C. terminal is no longer the old pen factory dating from the early 1900's, but is now a classy condominium.

The length and width of Desaulniers Blvd. from Tiffin to Argyle was a gigantic ditch. The city has since replaced all the old water and electrical facilities, which they have covered over with a new, more beautiful grassy median (ending at Mercille rather than Notre Dame) and very attractive 21st century lighting standards. 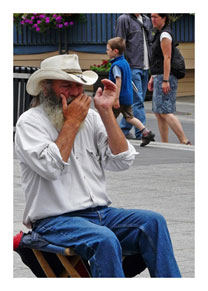 St. Lambert wasn't the only pleasant surprise, as we found another of our former favorite places – Old Montreal, just as busy with re-construction, meaning refurbished buildings plus new (old) streets covered with cobblestones as well as with more tourists than I can remember, except perhaps during Expo (1967) year. Place Youville, St. Peter, St. Paul, St. Francis X. and all the streets between, were crowded, and in several areas entertainment was provided by street musicians. 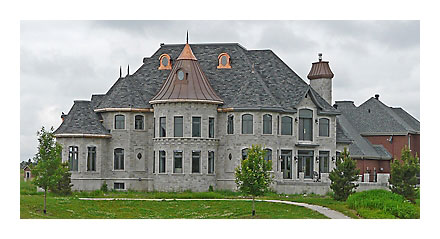 One of many dozen Chateau-style homes built in Brossard. St. Lambert, a much older city, lacks sufficient open space for this type of major development

However, the biggest surprise of all was Ville Brossard, known to most of us as something of an extension of St. Lambert. A very large section (near where we stayed at the ALT Hotel) is a development reminiscent of France's Loire Valley with many dozens of multi-million dollar chateaus. Everywhere we looked, home after home seemingly competing with its neighbours in style and grandeur.

For those alumni who are thinking about going back to St. Lambert during next May's Reunion 2010, I know you will be impressed, amazed and pleased that you decided to visit one more time.