There is the wise proverb that says, "It takes a village to raise a child."

Thanks to Andy Little for the photos of "Romeo", the "Bathing Beach" and "Fishing in the St. Lawrence River".

That African saying could well have been penned by St. Lambert residents, and more specifically by those who lived on Pine Avenue, between Green and L'Esperance Streets "My Village", during the years 1945 to '55.

How secure we felt! Our parents appreciated that should one of us go astray (during a brief moment when mother's watchful eye may have looked elsewhere) that another mother would step in, and give the needful, warning word! There was no resentment, or feeling of intrusion. Rather an unwritten agreement prevailed, that “neighbours looked out for each other.”

One of my earliest memories as a pre-schooler took place at “the Kenny's''. I was a frequent “dinner guest”, watched over by my adored teenage friends, Cameron and Eleanor. One evening, I tried something I had never done before (nor ever tried again!)-I put my knife in my mouth. Mrs. Kenny (we never addressed our elders in a more familiar manner) suggested this was not the proper thing to do. In embarrassment, I blurted the fib,”But Mommy does it!” This story was repeated with glee as long as my mother and Mrs. Kenny lived...something only a mother could forgive! From table manners to moral and physical safety, EVERYONE had a hand in our welfare.

In those years, an open area of field, several building lots wide, still existed on the one side of Pine Avenue. There, in the winter months, we had a flooded rink, a frozen snow block" toboggan slide", as well as countless snow forts. These were maintained by the local dads, and used by all everyone. 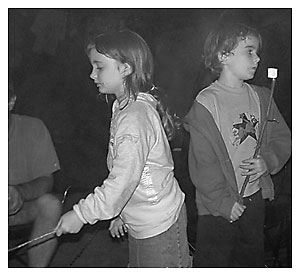 In the summer, as the grass grew high, the after-dinner games of hide-and-seek or cops-and-robbers made paths and hiding spots in its nooks and crannies. In a rock-lined pit within a small clearing, we were treated to evening community bonfires, with marshmallow roasting and singsongs (and always a bucket of water nearby).

There was a wide concrete front walk in front of our four-flat house. This was an ideal spot for skipping rope competitions, hopscotch, and ball tosses. A nearby driveway connected the street with the “back lane.” There our neighbour, Mr.Gough,constructed a lightly framed “play house,” where all the local young people congregated to present talent shows... admittedly pretty “ad lib” efforts, but loyally applauded by the assembled parents on those summer evenings. 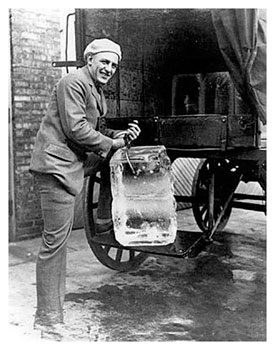 The "back lanes" were narrow thoroughfares that ran parallel to the street, separating the abutting back yards .Down these lanes passed a variety of tradesmen. In the 40's, the "Iceman" delivered frozen chunks to the kitchen iceboxes; the garbage collectors travelled that laneway; the call,"Rags and Bottles", heralded the ragman's cart; and coal arrived from Smiley's in a two-wheeled, horse-drawn wagon that noisily dispensed its cargo into our basements through a metal chute... When I saw the film, "Lies My Father Told Me", from Mordecai Richler's book of the same name, I experienced a sharp sense of "déjà vu" !!

Between the years of 1945 and 1955, this town block was "home" to many St. Lambert High School/CCHS students. In our building, situated mid-block, lived my family, with my sister, Shirley, and me, and beside us my Uncle John and Aunt Dorothy Vance (David, Keith, and Eric ... they formed a band in later years and all worked in accounting.) 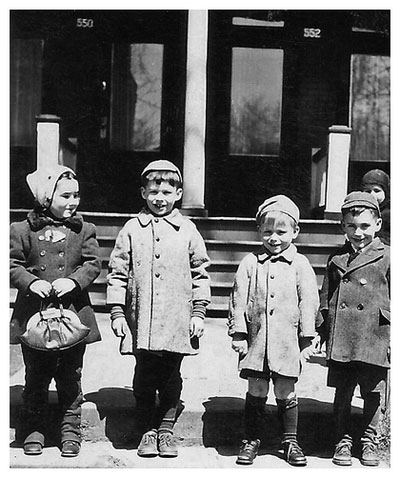 Me, and my cousins David, Eric and Keith.

Above us, lived the Strathdees, (Billy and Stewart, whose enthusiastic music entertained us all. They also formed a band).and above the other Vances dwelled the Cowies, (David and Warren). Proceeding toward Green, there lived the Goughs, (Barbara, and Joy). Above them were the McCallums, (Ross and Doug and their much younger sister Heather), then the Smiths (Pat and Libby), the Darlings (Jane), the Ackermans (Pat), the Maizes (Eric, Enid, and Neil...another musical family. Neil and Enid were pupils of Mrs. Hicks... and were well known for their performances in the Gilbert and Sullivan operettas) and the Mainwearings (Hazel). Across the street, going back toward L'Esperance, there were the Snyders (Betty and Joan), the Stockdales (Gordon), Murphys, with no children, and a closely–guarded lawn that no juvenile toe dare touch! In Murphy's side lot, my father was allowed to put a garden. A fence and array of flowers faced the street, but behind that grew an ongoing resource of vegetables, share with the households that surrounded it. In the next, four-flat building there were housed my Aunt Peggy Vance (Kenneth), upstairs were Aunt Nellie Vining (and the twins, Earl and Roy). Next were the Kenneys (Eleanor, another lovely singer, and Cameron, whose many academic achievements (a Rhodes Scholar!) were only rivaled by his sports accomplishments. (remember “The Combines” and “The McGill Redmen?). Above them lived the Lees (Margaret and Sheila). The field stretched from their place almost to the corner of L'Esperance...Returning back across the street, there were the Beamans (Betty and Fred), Guthries (Donald.”Scotty”), and the Royals (Melody) The Royals' house was sold in the early 50's to the Des Trois Maisons (Suzanne, Marguerite, and Paul). They possessed a “show–stopping” pet... a de-perfumed skunk called “Petunia”. When she was out digging in the front flower beds for grubs, strangers passing by were not sure whether to run or freeze... much to “the locals” amusement!

A few of these families (Snyders and Lees )were of the Catholic persuasion, and their young people went to “The Academy”. However, even before “Ecumenicity” was talked about, we went to each other's music concerts, joined in the watching of younger ones on the block, and shared one another's joys and sorrows. 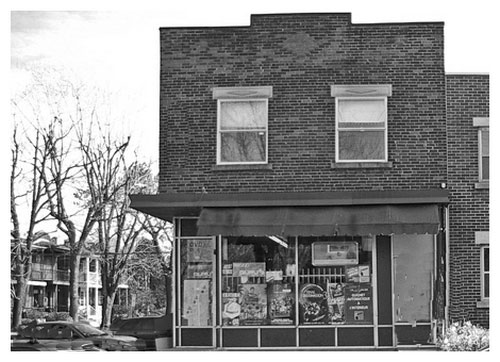 A favourite landmark for all the young set was the corner store, Ahern's. Penny candy, and their incomparable MEL-O-ROLLS (paper-wrapped ice cream), the newspapers, and other sundries made this the prototype of today's "Needs" ("Depaneur") stores. Above the store lived the Hogg family (whose large white "chow" and our scrappy black pooch, "Perky", would do battle whenever opportunity arose!) The Hogg family ran a private school on those premises. Not all the trades people used the "back lane" for their commerce... How it was decided who used which was never clear!

Both the milk and bread deliveries were made on the avenue by horse-drawn carts. The milk came early, usually before daylight, and was contained in glass bottles...I remember seeing the frozen milk pushing up the cardboard caps on cold winter mornings! “Romeo,” who treated his horse, “Juliette”, with exemplary kindness, drove the Wonder Bread cart. I recall one early Fall day, when the sky turned a strange yellow-black, and sudden winds drove heavy sheets of rain, whipping the trees, uprooting some elms, and lifting up chunks of the concrete roadway. As it was beginning, Mother begged Romeo to take shelter in our home... but he refused, staying beside Juliette, putting a blanket over her head and back, keeping her calm. 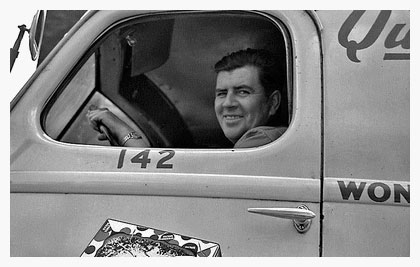 We were later told we had experienced a tornado... We never forgot Romeo's loyalty to his four-legged friend. He later opened a snack bar bearing his name on Oak Avenue, just below Green Street. In the '50's, the horses were replaced by trucks... losing a certain charm... but hopefully making the horses' lives easier, not to mention the deliverymen's! 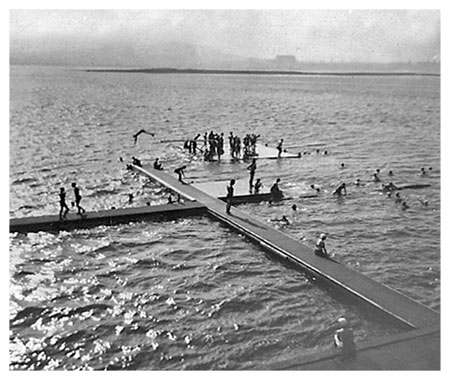 Though we lived several blocks up from the St. Lawrence River, the water was still part of our lives. We would make expeditions to "The Beach", younger ones accompanied by the teenagers. I can still close my eyes and imagine the smell of disinfectant, as we descended the concrete steps, through the retaining wall, to the cement platforms that turned into more steps down into the designated swimming areas. Hemp- covered boardwalks extended out into the deeper area, allowing closer access to "the raft". All this was supervised by the lifeguards, one specifically remembered as "Butch". This "community swimming hole" was usually jam-packed ...until POLIO SEASON. The term struck terror in our parents' hearts! The "Beach" became "out-of-bounds", crowds were avoided, and we had to swelter in the humid heat, without the relief of our dips at the Beach. It was not until the mid-50's, when the Salk vaccine became available, that the Iron Lungs were silenced, that parents' fears of the dreaded disease were stilled. 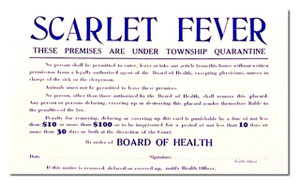 Childhood illnesses were an ongoing concern to parents in those days. After all, Sulfa and Penicillin, so recently refined through use in WW 11, were really the only antibiotic weapons in the doctors' arsenals... When one of the Doctors (Brown, Flint or Craig) made a diagnosis of Scarlet Fever, Red measles, Whooping Cough, Mumps, T.B., or Polio, if the patient was not sent to the hospital for contagious diseases in Pt. St. Charles, the police arrived with a "Quarantine" sign. That went on the front door, warning away any visitors. Moms were well taught in isolation procedures, and we were confined for long, boring days, often behind darkening wooden shutters, while we heard our friends playing in the lane nearby! 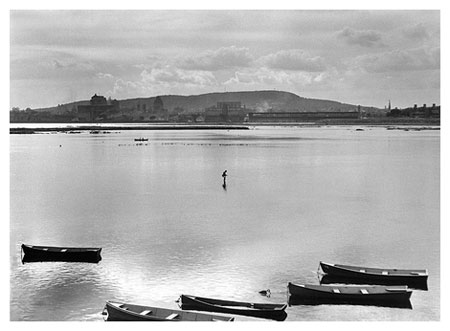 My father, who loved to fish, had a rowboat that he kept anchored at the bottom of Notre Dame Avenue. During those "lazy, hazy days of Summer", I often accompanied him, and my cousins recall outings with "Uncle Pliny," when we spent hours trying to coax bass and perch onto our hooks. This predated the Seaway by many years, and there were good fishing holes below the rapids, off Moffat's Island. Such tranquil moments!! The whole Montreal skyline stretched before us with the sun reflecting on the moving water! Would we be able to even hazard a guess at locating that area today? 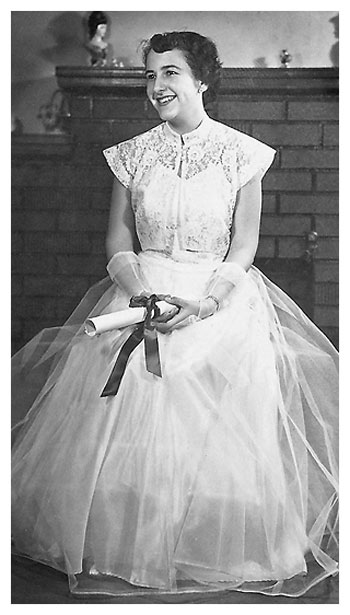 My beautiful sister Shirley on her Graduation Night in 1951

For many families, the summer evenings' entertainment took place at Logan field. Leagues, from Pee Wee to Intermediate, played Softball on two diamonds. Teams such as the Bengals, Senators, Crackers, Sun Sox, and Athletics played along with Montreal South and the Legion.

We moved from Pine Avenue just as I was reaching high school age. However, I was among the younger ones named in the earlier paragraph, and most of the older young people mentioned graduated from "The High" while we lived there. I remember the excitement of seeing the older girls; my sister and her peers... as they left home in their white formals on that "magical" Grad Night There were no caps and gowns in those days, or a separate Prom Night, with stretch limos! The Graduates sat on the stage in all their splendour, went through the whole ceremony, speeches and all...and had their Prom in the decorated gymnasium afterwards. It was a special night...like no other ! I watched it all in starry-eyed wonder!

In this sophisticated and technical age, my granddaughter would read these reminiscences and shake her head in disbelief! However, I am so grateful to have grown up in that "simpler day". when "the extended family" included the whole street, and we were not defined by our possessions, but by our characters. "My Village" surrounded me with love, wisdom, and treasured memories.