One of the things I remember best, growing up in St. Lambert in the decade from 1944-1954 was the abundance of open fields and wooded areas that seemed everywhere. I lived first on Upper Edison and later on Merton Avenue. From both locations the “woods” were just a block or so from home. 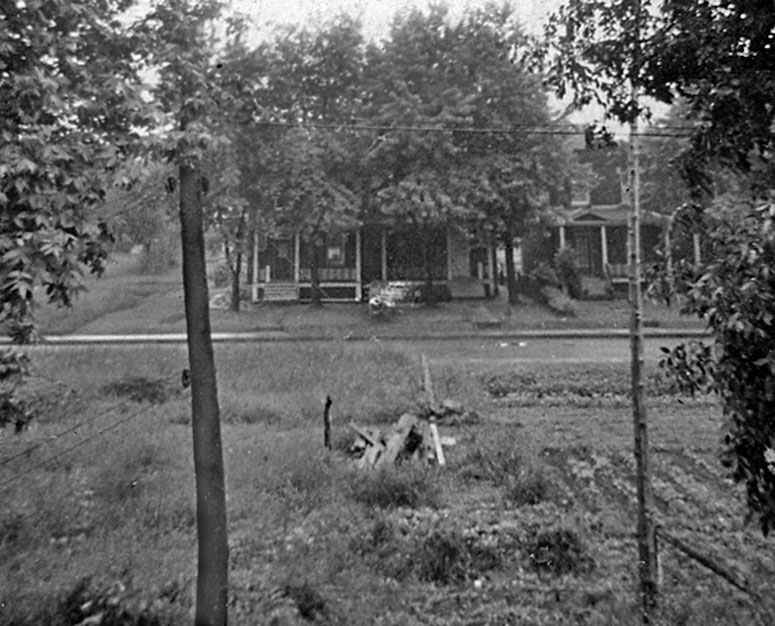 Picture was taken out my bedroom window at 361 Merton in 1945. It shows Curzon Avenue between Desaulniers and Logan.

It was paradise for a young boy, the perfect place for games of hide-and-seek, where trees could be climbed and forts constructed. On my way from home to the old high school, a walk of fifteen minutes, I was seldom on pavement. I had to cross streets, of course, but a good deal of the time was spent along paths that cut through vacant lots and open fields. Looking out my bedroom window, there were numerous vacant lots behind our home on Merton Avenue. Many of these lots were used for Victory Gardens during the Second World War. We had such a garden in the lot beside our house and my dad grew vegetables there long after the war was over. It was also the place where I was allowed to pitch a large, army surplus tent. My friends and I spent many a summer night there under the canvas. 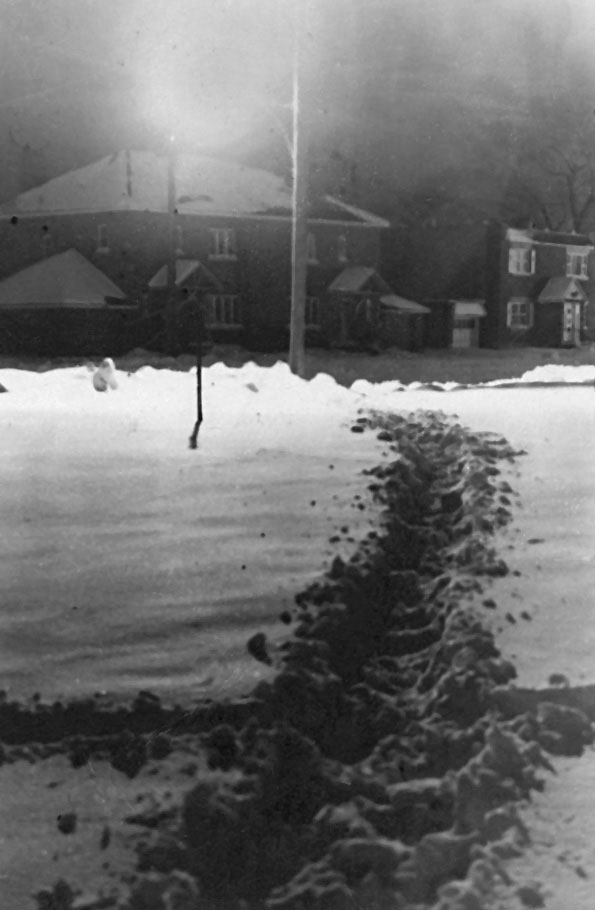 Picture is a time exposure, taken of the path that cut across an open field between Merton and Curzon.
Shot in 1948. The houses in the background are on Desaulnier(s?) Blvd.

My best friend, Bryce Weir, lived on Sanford Avenue, just south of Green Street and it was when we began to explore the woods behind his house that we came across a surprise. There, in middle of what we liked to call “the forest”, were sidewalks. No streets, mind you, just these concrete sidewalks. They had all seen better days, were buckled and cracked with the frost and overgrown with brush. They'd been so badly neglected that the word sidewalk was almost a misnomer. You couldn't walk along these slabs of concrete, but there was no doubt about what they had once been. And a closer inspection revealed sewers, also neglected, running parallel to the sidewalks. These were a mystery to us and I when I told my dad about them he was so skeptical I had to take him into the woods to show him the evidence. He was as baffled as I was. So these old sidewalks in the wooded area bounded by Green Street and the golf course remained a mystery. In time we just accepted them, the way we accepted the occasional wail of the bagpipes we heard when we played in the Dulwich swamp. We never saw the piper and were never sure where the sound was coming from. When I returned to St. Lambert years later, as an adult, the woods where Bryce and I played had been developed and homes lined streets that now featured functional sidewalks. I decided to check at city hall to see if anyone there had an answer to why those old relics were in the woods of my youth. Eventually an old-timer came up with an explanation. Apparently during the Depression, in the thirties, the city undertook a make-work project and cleared some of the woods, laying out sidewalks and sewers in the expectation that some day homes would be built there. But the project was shelved when funds ran out. Then war was declared and the sidewalks and sewers were forgotten, left to the ravages of time and weather. Trees grew in the cleared areas and by the time Bryce and I began exploring they had not only filled in the open spaces but their roots had extracted a heavy toll on the sewer pipes. I did learn, however, that the surveyors who laid out the original sidewalks had done a fine job. The new streets were in perfect alignment with those first planned thirty years earlier.

So sidewalk mystery was solved and now, thanks to a number of faithful readers of the Alumni News, I know that the Dulwich Piper was a Mr. MacKinnon who lived on Sanford Avenue and played the pipes in the privacy of his backyard when the weather permitted. I'm sure that kids growing up in other small towns have tales of their own to tell, but I doubt there are many who played in woods containing the skeletal remains of a Depression dream or were serenaded by the sound of the pipes as they hunted for tadpoles. St. Lambert in those years was unique.