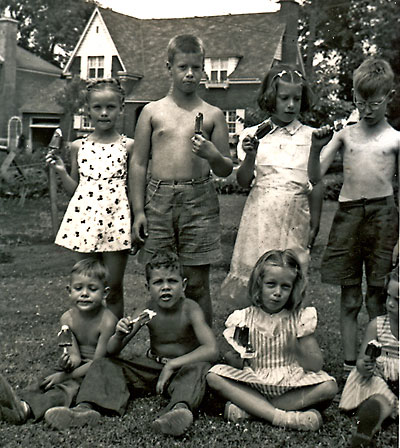 Before the age of television and electronic games, Saint Lambert kids devised their own play activities -- most harmless; a few questionable. Fishing in the St. Lawrence was quite a popular pastime after school and on weekends, in the days before the Seaway, and when fish were abundant and even edible, prior to significant water pollution. Access to the river was available at several locations via stairwells through the massive concrete wall that protected the shore. For bait, we collected giant night-crawlers on our lawn at night, after a rain. This was a developed skill -- knowing just how hard to pull on the above-ground end to prevent the stretched worm (almost a foot long by now) from breaking in half. And then there was the trick of attaching the slimy, wriggling creature to a barbed hook, without stabbing a finger. 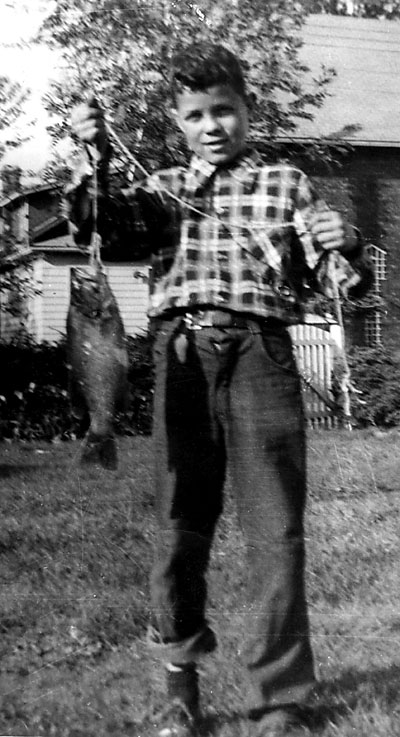 Bob with his first fish, caught in the St. Lawrence River. Note the lucky rabbit's foot hanging from his belt. (c. 1955)

My first success at fishing took place at the eastern edge of the concrete pad called the Saint Lambert Beach. I hooked a beautiful Largemouth Bass, which gave the line such a yank that I panicked and ran back along the pad, hauling the poor fish flopping onto dry land, and my heart pounding wildly with excitement. No reeling in or giving the fish a fair fighting chance. Sometime later, I learned from friends how to make a spear from a broom pole and a nail inserted in the end, and with water goggles we entered the underwater realm of our quarry. It was magical to cruise over a ledge (while holding our breath) and to see large bass and perch going about their business. We ate what we caught -- usually cooked over a fire in our backyard lane, with potatoes wrapped in aluminum foil. We thought we were really roughin' it!

Swimming and fishing were not the only activities encouraged by the close proximity of the great river. It was a summer ritual to paddle out to Moffat's or nearby islands to capture and bring home a gull chick, in an attempt to raise it as a pet. Of course we could not provide the correct diet for the young birds, and they sadly soon succumbed. I realized later how foolhardy this excursion was, since the swift current and distance had put our very lives at risk. We never told our parents, but they must have wondered how flightless birds ended up in our rooms.

Territorial instincts reigned in those days, whether on the sporting field or in our beloved Swamp at the end of Dulwich. In spite of our early ages, football games against nearby teams like Longeuil were real tribal affairs, fortunately controlled by rules and referees. When the other teams came to our town, we were usually confident in sending them back with a loss, but it was an entirely different feeling when we were on their home turf, with bleachers full of their supporters. On one occasion in Verdun, we had to race back to our bus, with irate fans in hot pursuit. I never knew why! During a game, having one's wind knocked out of the lungs, or worse, a low tackle in the mid-section (before the days of adequate athletic protection!), sometimes left us gasping for air on the ground, but we always survived to play another day.

The adventures in the Swamp were centered around a large hut (big enough to house a dozen guys), constructed from branches, and situated in a secret place in the dense woods. The exploits of Robin Hood and other action heroes on the radio stimulated our young imaginations into over-drive. I spent countless hours perfecting my skills as an archer (with homemade bow and cattail arrows) and throwing a club carved from the thick base of a willow. Our fortress was inevitably discovered and destroyed, or worse, taken over, by rivals from Longeuil, and so began "The Swamp War." Following a number of minor skirmishes, one major battle took place in a nearby clearing with about 15 members on each side. We took turns charging with great bravado, and just as rapidly beating a retreat, as the air was filled with missiles, but remarkably no contact was made in the bluffs, and no one was hurt; we concluded the day was a draw. In retrospect, the whole affair was reminiscent of the symbolic battles between neighbouring tribes of aboriginal people in Papua New Guinea, where serious injury was rare. Gentler pursuits then followed during peacetime, like chasing butterflies, watching young ducks and coots learning to swim, and picking and eating the sweetest wild strawberries in the fields. As winter froze the swamp surface, before the first snowfall, we could skate with the greatest feeling of freedom throughout every corner of the swamp, although every once in a while, the seedy heads of a cattail sent us reeling out of control. 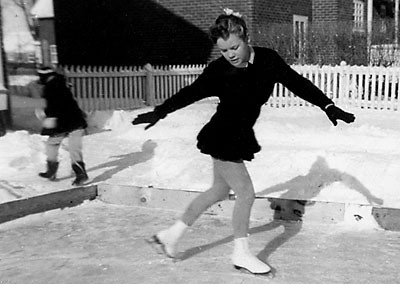 Jean Wrigley practising figures on a back-yard rink (c. 1956). Jean later won the Eastern Canadian Figure Skating Championship and then turning professional, she pursued a career as a soloist with the Ice Follies.

More-friendly "battles" often broke out in our yards during the winter months, when horizontal rows of heavy snow blocks served as forts. Drawing on experience from building snow men, some of these fortresses had walls six-feet high and two-feet thick, with peep holes installed to observe the advancing enemy (our friends). Mounds of pre-formed snowballs were maintained, in case snow conditions did not permit the recruitment of fresh ammo. We tried our best to defend the fort with a barrage of snowballs, and victory was claimed by either side if the fort wall survived or was penetrated or pushed over. The event usually ended in total laughter, snow down the neck, and clothes sopping wet. All the fellows developed great throwing arms, with accuracy practiced daily on the way to and from school, by hitting distant telephone poles and stop signs with snowballs. Winter was embraced in those days, and anxiety set in if Christmas approached without snow on the ground, or weather sufficiently cold to make rink ice in our backyards or at Lesperance Park. Road hockey inevitably turned into ice hockey, with lucky individuals sporting a new pair of skates. Hockey sticks seldom lasted more than a month, due to inept slap-shooting. These were the days before protective headgear, and our exposed ear edges were in a continual state of peeling from repeated frostbite. My older cousin bought me a leather helmet reminiscent of those of early airmen, but I was too stubborn to wear it. I am certain we can still remember the numbing ache from frozen feet. It was a sad day when warm spring temperatures softened the ice and deep fissures could readily twist an ankle. But then there were other sports and outdoor activities to pursue.