C.W. Smiley was the supplier of coal for furnaces or stoves, and wood for fireplaces. Most deliveries were made by horse and wagon in the warmer months and by sleigh in winter. These vehicles could only handle a ton at the most. The wagons consisted of an open top box on very high wheels, the driver sitting at the front as the horse plodded along. Nothing seemed to be in a hurry at Smiley's. It was an event when the coalman came because he had to rig steel troughs from the little door at the back of the wagon to the basement window that led to the coal bin. These troughs were as shiny as polished silver on the inside, and the noise when the coal ran down them was ear splitting. Later on Smiley bought a couple of Ford trucks and proceeded to overload them with three or four tons of coal. They left their imprint on the lawn as they backed towards the basement window. My Dad didn't care for that but what choice did we have? The more coal per delivery, the better the price. The coal arrived at St.Lambert in railway hopper cars, delivered by CNR to a siding right beside his depot. The depot was a series of partially covered bays piled with different types of coal and spilling out the front. There were motor-driven conveyors to propel the coal up to wagon-loading level. 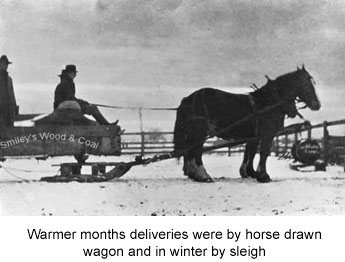 Coal became a problem as WW2 wore on. The good Welsh steam coal and anthracite disappeared from the market and the US hard coal that replaced them was hard to keep going and clinkered badly. For those of the modern age, I'll explain that clinkers were congealed ash, forming in the furnace firebox just on top of the shaker grate. They wouldn't break when you shook the furnace down and had to be pried out the firebox door red hot. Later in the war a new product called coke was introduced. It came in coal-sized lumps but they were porous because a certain amount of the gas had been taken off, leaving a product that caught fire reluctantly but then burned very hotly. My Dad stoked the fire while he was home evenings and early mornings, but during the day it was my mother's job. A dirty task and hard work. 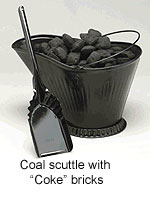 The furnace ash and broken clinkers were placed in the top compartment of a galvanized tin contraption called “The Banner Dustless Rocker Ash Sifter”. I guess it was an adequately complex trade name to become memorable. A lid was put on top and the whole gadget rocked back and forth. The ash dropped through to the bin below and what was left was either clinker bits (to be put in the garbage), or left over lumps of unburned coal which were salvaged for re-use. The ashes were used to keep the front walk from being slippery in wintertime, and as garden fertilizer in the spring. I spent a lot of time unwillingly rocking ashes.

We burned wood in a fireplace in the Hall, but later on my father installed a “Quebec Heater”, a stove in a vertical cylinder shape, just beside the fireplace, judging this to be a far more efficient heating device. Our experience with the fireplace was that it tended to draw heat out of the house and up the chimney. 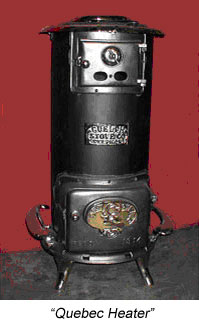 My memory of St.Lambert doesn't go back beyond dial telephones. Our number was 2793, which was a local St.Lambert number. Calling Montreal added a “toll” or long distance charge, unless you had a “Zone” phone which cost more per month but provided free calling to and from Montreal. My Dad, as a Bell supervisor, had free phone service including long distance within Ontario and Quebec. We also preceded most people in having phone jacks installed and extension phones in various rooms round the house. I guess this came along in the later forties. In the fifties, St.Lambert phones became part of the Montreal system and our number was changed to ORchard 1-2793. My Dad's sense of humour combined with his dedication to the phone company led him to paste this little sign beside the toilet, a company slogan of the day:

“No job is so important and no service is so urgent that we cannot take time to do our work properly”.