The words Ice and January go together for anyone raised in St. Lambert, hence the topic of this Flashback.

Note: The pictures below provided courtesy of the St. Lambert Historical Society.

Ice on the roads is still something to worry about, but if you were a kid, growing up before they used salt on the streets, ice was something else - it was an opportunity. It made “hitching” a ride on the back of a car, truck, bus or even a streetcar, a favourite winter sport. It was a great way to get around, as long as you didn't get caught.

Ice cubes are as common today as the water we drink. They are the product of refrigerators. But not in the forties – particularly during the war. Back then we had iceboxes. Refrigerators were still relatively new, expensive and in short supply. Fortunately, the St. Lawrence River was at hand and global warming was in the future. As regular as clockwork, the river froze solid and when it was safe, men ventured out with their teams of horses, harvesting the “crop”. Great blocks of ice would be sawed and loaded onto sleds, driven back for storage in a giant icehouse located beside the St. Denis Street football field. 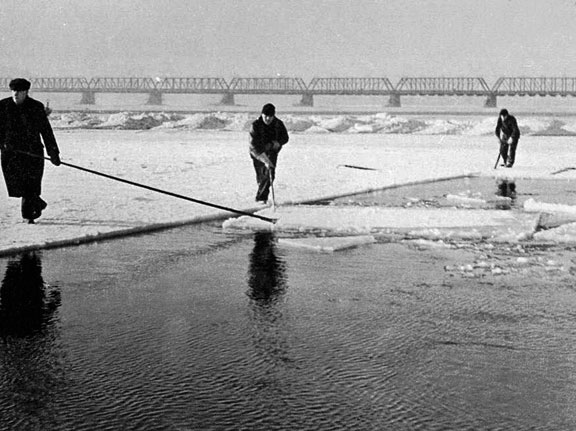 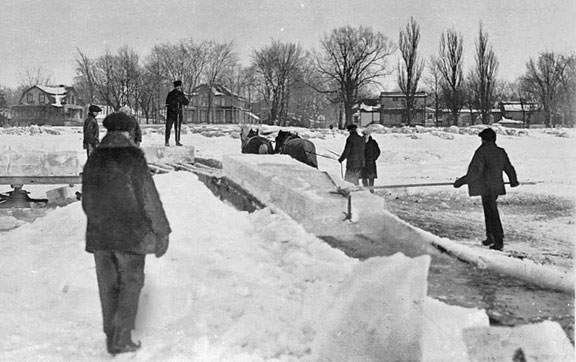 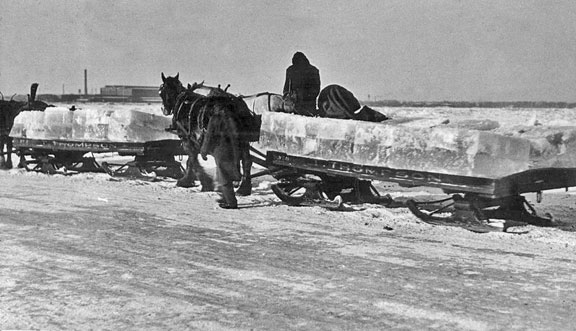 There, insulated with sawdust, the ice would be stacked until it reached the ceiling. We got our ice the same way we got bread and milk. It came by horse drawn sleigh in winter or cart in summer. The iceman's task required a good deal of strength. He would grasp a block of ice with tongs, hoist in on his back, usually protected with a heavy leather apron, and take it right into your house, depositing it in the “freezer” compartment of your icebox. In warm weather the deliveries were more frequent. I can remember lying in the grass close to the old icehouse on hot summer days – a great way to cool off. If you were lucky and ice was being picked up for delivery, you might even get a free wedge, chipped off by the manager. These wedges were divided among friends and sucked, providing welcome refreshment. When the war ended, refrigerators began to replace iceboxes and by the fifties there was very little ice harvesting on the St. Lawrence.

That ice, a great natural resource all winter long, became the enemy in the spring. Unless the St. Lawrence River channel was kept clear by icebreakers, and there were many years when this was not the case, the ice choked the river and water flooded homes in low-lying areas. I remember when Riverside Drive was closed to traffic because the floodwaters had deposited huge ice flows on the pavement. 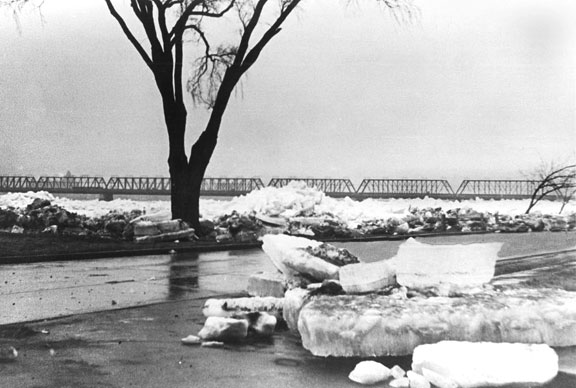 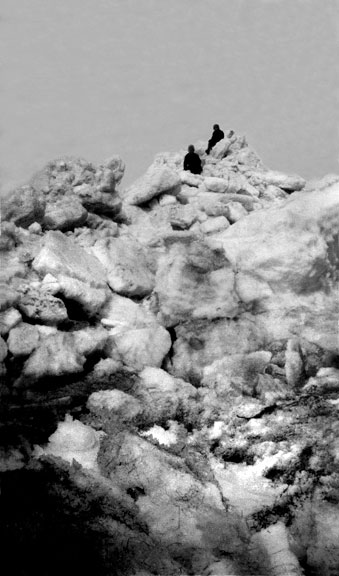 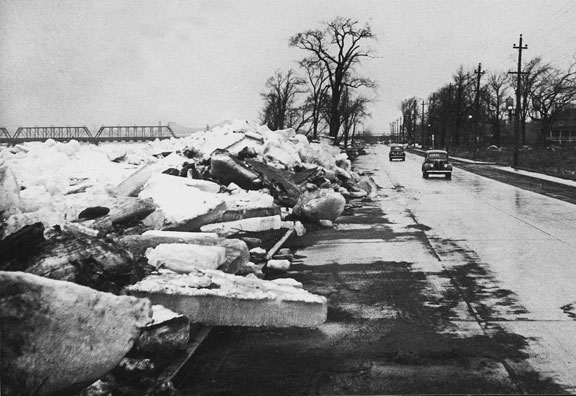 The more adventuresome kids even climbed these icebergs and rode them in the ebb and flow of the floodwaters. Eventually icebreaking was refined and floods in St. Lambert became a thing of the past.

The river ice – a hazard in spring – could, on the rare occasion, provide a huge benefit for kids in the late fall. It took a prolonged, early cold spell, before the first snowfall, for the river to freeze over evenly and deliver an endless sheet of ice. This was rare because conditions had to be perfect – the right combination of cold, a lack of wind, and an absence of snow. But I can remember heading down to the foot of Sanford Avenue with a group of friends, lacing on our skates and heading out on that river ice. 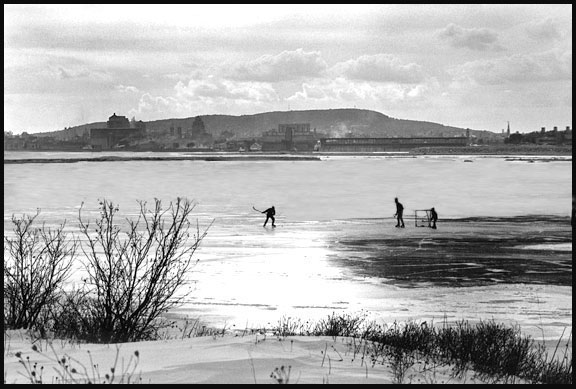 The above picture is a composite that portrays skating on the St. Lawrence as Andy remembers it from his youth.

What made it doubly magical - it was transparent and we could see the bottom, beneath our skates, even spot the occasional fish. Although the ice was clearly thick enough to support us, from time to time we would hear a crackling and watch with alarm as a spider web of cracks appeared just beneath the surface. We never fell through, but this did add a touch of excitement to the undertaking. Of course we never mentioned this to our parents.

These opportunities to skate on the St. Lawrence were both unusual and brief - conditions had to be just right - and all too soon it would snow. When that happened we turned to the outdoor rinks for our skating and hockey. Today's young hockey players and figure skaters are familiar with ice, but it is the product of a Zamboni and is enjoyed in an enclosed arena. In the forties you skated on ice outside, no matter how cold it was, and warmed up around a hot stove in a wooden shack. Today's kids will never experience the particularly pungent smell – a combination of wet wool and smoke. Call me sentimental, but I think they're missing something. We did play some of our high school hockey indoors, against teams from Montreal, in the Verdun Arena. And I remember one year we actually managed to schedule a playoff game in the old Montreal Forum. It was a thrill to be in the same building, on the same ice, as the Rocket, Toe Blake, and other stars of Les Canadiens.

So the next time someone mentions the subject of ice, let it be known there was a time in St. Lambert, more than half a century ago, when the word had a distinctly different dimension.