Homage to a St. Lambert Home

My best friends and neighbours (a senior couple) recently had to sell their Winnipeg family home of over 50 years, due to illness. This is the eventual course of life for most people, but it started me thinking about what a home means, as ones passes through various stages of life. As youngsters we believe we will always be safe in our home cocoon, that family members, friends, teachers and coaches will always be part of our lives, and that we will live in this special place forever. Such security blankets are too often pulled rudely away by events and sometimes tragedies, exposing us to realities of an uncertain future, and yet this is part of growing up, moving away to achieve independence, to attend a distant university, to accept a new position, or to marry someone far away. The passage of time is marked out by the series of homes in which we dwell, and the schools we attend, like chapters in a book, and one can never step back in time, as much as we sometimes would love to do so. We can however flip through the pages of our memories, recalling loved ones and friends, special events, activities and hobbies – all centered around the home, school and other special places. Perhaps this is the main reason many of us CCHS graduates appreciate a connection with our Alumni Association. Home and school were such important centers of our early development that some of us crave this tie with our past, even though we are now separated in time and space, in so many directions around the globe. Sharing home and school life fulfilled our common instinctual need of being part of a family, team, or other organized group. 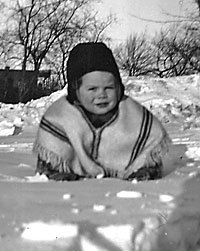 1945 (when I first saw snow) was when my family visited Montreal from our home in Buenos Aires. 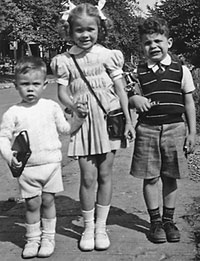 You're taking us where?
John, Jean and Bob in Argentina -1946

My family moved away from our first home, in Buenos Aires, Argentina, while I was four, but I can still recall glimpses of our house, with spacious gardens, wading pool with metal frogs spouting water, our Irish Setter Capitan bounding in the backyard, a three-story tower covered in ivy, and the kitchen where wonderful ravioli and other Latino dishes were prepared from scratch. Even to this day, certain delicate scents of food and the powerful perfume of Oleander blossoms instantly carry me back over six decades to the opposite end of the world. Traveling by ship on several trips to Montreal, we stopped at various ports along the Atlantic, including Cuba during the Batista regime, long before Castro ever thought of "El Revolution." Arriving in Montreal in mid-winter of 1946, we stayed with my Uncle Art and Aunt Myrtle on Victoria Avenue in Westmount, until our new house could be built across the river in the town of St. Lambert. Bundled up in a thick, stiff snowsuit, I was plunked into the front-yard snow up to my little waist. Never having experienced this white stuff before, snow was quite a revelation, and what I thought was the sweet smell of snow was actually coming from a nearby bakery. I still think of soft white snow when I smell baking bread. I was not too impressed with the cold and damp weather of Quebec. My favorite exclamation was "malo," meaning bad in Spanish.

In summer we visited our new house at 282 Logan (corner of Maple) a number of times during construction, and a few photos have survived of me and my siblings (younger brother John and older sister Jean) playing around the rising structure. A big event was the digging of a 2.5-foot-deep trench around the backyard property for planting a Barbary hedge. Before the plants arrived, a heavy rainfall filled the trench, and we kids had a great time rushing through the deep water. There were plenty of other trenches to explore, as St. Lambert was undergoing a building boom at the time. Six-foot deep and wide trenches (for water pipes and other utilities) ran down the new streets, and provided a wonderful maze that went on for blocks. The soft, gray clay of the walls was easily scooped out with our fingers, and we carefully crafted a variety of pots and dishes, which dried rock-hard in the sun.

Our favourite place to explore was the Dulwich Swamp (long since covered by housing), where we picked and ate the sweetest wild strawberries in the meadows, and learned all the calls of the abundant birdlife. We returned home with dozens of leopard frogs, and set up in our back yard, ponds with wooden diving boards, and encouraged our captives to make spectacular leaps. Somehow most succeeded in vanishing overnight (likely my Mother assisted their escape) and we assumed most of them had hopped back home over the next few days. Such adventures with the local fauna no doubt stimulated me into becoming a biologist. Over the subsequent years, my animal collection graduated from garter snake to boa, iguana to alligator, living in my bedroom or the basement. Plenty of kids dropped by 282 to see this miniature zoo. Escapees continued however, and one of my green iguanas, that was usually satisfied spending the day sunning on the window curtain of my room, made it to a neighbour's roof top, where it was discovered months later by a friendly City of St. Lambert worker, and returned to its rightful owner. 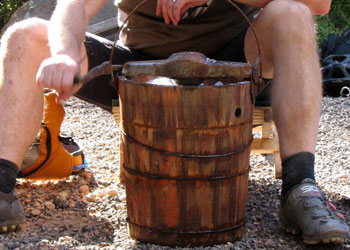 I took my turn cranking the lever on the wooden tub.

Being a young neighborhood with both Franco- and Anglophones, there were always plenty of friends to play with, and language was seldom a barrier. All my French buddies became completely bilingual, while even today I have trouble conversing with colleagues from Quebec and France. I wish I had made more of an effort in my French classes at school. All-season road hockey and touch-football games at Logan Park were a daily occurrence. Even after a hard day at work, and a long streetcar ride to the South Shore from Montreal, my Dad always had time to throw a ball or football with me, and he didn't even show displeasure when an errant throw of mine took out a pane of glass in the corner window. His sports were golf and boxing, and he bought us several pairs of beautiful leather boxing gloves and a punching bag, which helped develop our defensive skills. Our family often had "asados" (Spanish for barbeque) on the weekends, which was yet another word I had trouble explaining to my friends. For dessert we often made vanilla or strawberry ice cream, and I took my turn cranking the lever on the wooden tub, with salt and ice around the liner. Wow, it was so good on a hot day. Life was truly sweet and carefree.

There were a number of Catholic schools and convents in the neighborhood, and a stream of young girls in black and white uniforms walked by our house on their way to classes, sometimes accompanied by nuns. The latter's strange clothing and formal demeanor were in such contrast with our teachers at Chambly County. We were also intrigued by the colourful parades put on each year by various Catholic churches, but had no idea of their significance. They were fun to watch anyway. Community events were announced by loudspeaker, blasted from a slow-driving car, which passed up and down the streets. We hopped on our bikes and followed along, whistling the stirring marching tunes (mostly by American composer John Philip Sousa) that were interspersed with the messages. I can still whistle many of those tunes to this day. 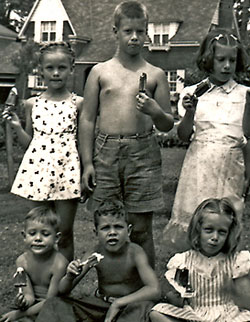 While we were growing up, we formed close relationships and played with a succession of neighborhood kids, especially Judy and Lindy Barber, Doug and Bev Stride, Pierre Duquette (with whom I shared a secret whistle), and later the Waymans -- David, John and Anne. Such friendships did not always get off on the right foot, for my best friend, David Milligan, informed me decades later that as he drove by on his bike on our first meeting, I threw a rock and hit him on the head. Perhaps I was still a little upset at leaving home in Buenos Aires, or was I simply displaying my territorial claim to my new house? Either way, David and John Milligan and I became inseparable over the school years, and I will always remember the amazing flavor of Mrs. Milligan's baking (especially thick, syrupy butter tarts) offered to me at each lunch hour as I dropped by the Milligan home on the way to school. When my Dad passed away, these friends and so many other neighbors came to assist us in many ways, even years later. One never forgets such acts of kindness and community spirit. 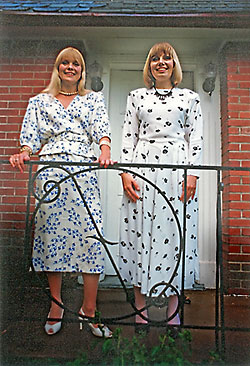 Although we four children eventually left home and St. Lambert, we returned each year for the next three decades to visit our Mother, Eva Wrigley. Jean Wrigley and Arlene Dahl (Robert's wife) at the front door (1988)

During the 2005 CCHS Reunion, Anne Wayman kindly invited me, my wife Arlene Dahl, my sister Mary, and her husband Herb de Bray over to her old home (now beautifully renovated), and we were permitted by her neighbour, now dwelling in our old 282 home, to see what changes they had made inside over the many years.

Although the exterior was much the same, the inside was completed renovated, including the basement, where my brother John and I honed our hockey skills, and where I had attempted to build up muscles with primitive gym equipment. Walking from room to room, memories came flooding back, and I caught myself becoming more than a little emotional. The scary shadow on the ceiling in my parent's bedroom remarkably was still there. I climbed down the creaky wooden stairs where I used to slide down roughly on my bum, and then passed through the dining room where we shared so many meals and unending laughter. I gazed at the old stone fireplace where I used to fall asleep in the warm glow, exhausted after playing in the snow. 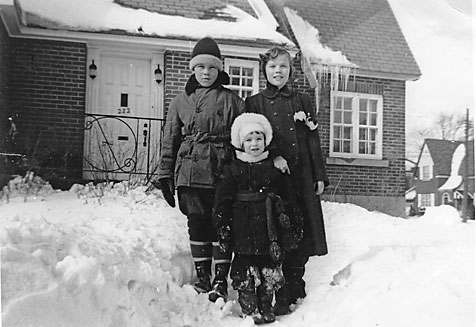 By the early 1950's we had become fully acclimatized and truly at home
in St. Lambert. Robert, Jean and Mary in front.

When we left, I had a warm feeling that the old place was loved as much as when we were youngsters. With houses built so well in those days, I pondered how many families would centre their lives around this special place at the corner of Logan and Maple. How many fascinating events had taken place on this site going back in time through pioneer days, the fur trade and early exploration, and through thousands of years of First Nations history. My Dad Ernie, Mom Eva, brother John, and my first wife Gail have sadly all passed away, and my sisters Jean and Mary and I each live over a thousand kilometers apart, but when I gaze at our old pictures, taken both inside and outside of our dear old home, it seems just like yesterday we were all together as a family, and ever-so happy. It made me feel so very fortunate to have been raised and educated in St. Lambert, and nurtured in our home and CCHS schools.