"In the past, I've written about a wide variety of topics in my flashback series. But no set of high school recollections would be complete without a reference to something that was of all consuming importance during those years. Namely - romance. And since February features Valentine's Day, romance seems the appropriate topic." - Andy

Dating in the fifties had few things in common with today's rituals. It is like comparing the way teens dance today to the way we danced back then. Or comparing the music. The era of free love and rock-and-roll was yet to permeate St. Lambert in my high school years.

For a couple of years, determined to avoid the pain of another break-up, I played the field. A different girl every month or so. But when I was fourteen, I was invited to a party at Stu Fickett's house. It was there I met Beverly Pascoe for the first time. I was smitten.

She apparently felt the same way and within a few weeks we were going steady. No more playing the field for me. But dating Bev wasn't simple. She lived in Longueuil and this complicated things. It involved streetcars and buses. Fortunately Bev was attending Chambly County High School so she was in St. Lambert a good deal more than I was in Longueuil. She would also make the trek for the Saturday night dances at the Pit with a number of girlfriends from Longueuil. That way I didn't have to take her home – she went back with her friends. In summer, I could bike to Longueuil for dances at the Longueuil Recreation Association and the boating club. We liked to jitterbug to the music of Duke Ellington and Glen Miller. But distance was putting a strain on our romance and when Bev dropped out of high school to take a secretarial course, it was time to move on. 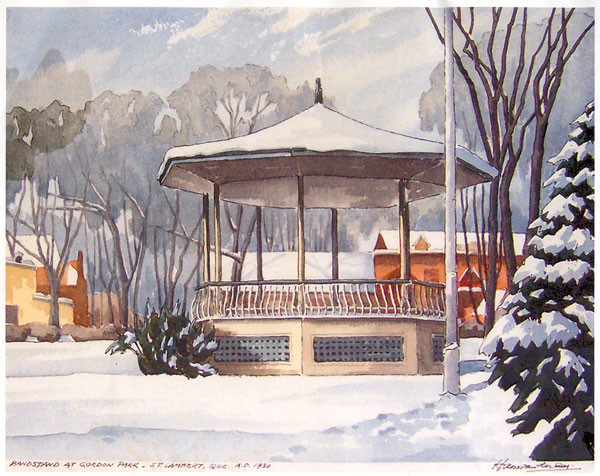 This painting of the Gordon Park bandstand – in winter – is an appropriate reflection of my feelings at the time. My first big romance had gone stone cold.

For a very short period I dated Lois Hashek, but soon found my best friend, Bryce Weir, was more interested in Lois than I was. When the Sadie Hawkins dance rolled around, Lois called me to say she wanted to ask Bryce, but didn't want it to interfere with our friendship, so I gave them my blessing. They began going steady.

She was Bryce's first serious girlfriend and he eventually married Lois.

My next, and last, steady high school girlfriend was Jean Nesbitt. Determined not to make the "older woman" mistake I'd encountered with Barb Black or the geographical challenge posed by Bev Pascoe, Jean was both younger and lived in St. Lambert. She was two years behind me in school and her home was in Victoria Park – the other side of town from my place on Merton Avenue. But I was young and in love and distance was no obstacle. Our music? Frankie Lane and Vaughn Monroe, Connie Francis and Rosemary Clooney.

Okay, I can hear you saying, all this isn't what you really want to know. What about the sex? Well, faithful readers, I am afraid I will have to disappoint you. Remember, those were different times back then. With Barbara Black, it was limited putting my arm around her in the movies and kissing her goodnight. And that, I thought at the time, was a very big deal.

With Bev it progressed to necking - the next step in the courting ritual. Finally, with Jean, we made the huge leap to petting. Not that I was satisfied stopping there. But Jean was resolute, as were most girls back then. Full sex was something for married couples only. Our romance ended when I graduated from high school and went off to university. While I was away Jean's family left St. Lambert. 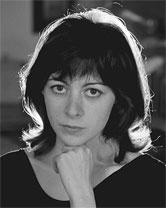 Just as well – at Bishop's University I began dating Dolce Narizzano, a coed from Westmount.

We will be celebrating our 48th wedding anniversary this June.