By September 1942, when I moved to the big school in the center of town, the world was in the depths of global war, but I cannot say it intruded much on school life. We saved our pennies to donate to the Red Cross, and quarters went towards War Savings Certificates, but I don't remember being taught about the countries war was affecting so seriously, nor do I remember any reference to the frequent tragic events taking place all over the world. That kind of talk all took place at home where my parents kept a world map on the kitchen wall, updated with the lines of battle in Europe, Africa, Asia and the Far East. The line of the German advance into Russia provoked particularly solemn faces. On November 11 the Remembrance Day service at the war memorial across from the front of the school drew the entire student population. We watched the band play, the soldiers march, the wreaths being laid, the trumpet sounding and the flag being lowered. In some modest way we were touched, but mainly it was time away from our classes. 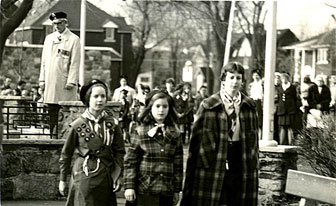 Wreath laying at the war memorial in St. Lambert.

The memory is a bit vague but I'm sure I saw a troop of cavalry ride by the bottom of our street on smart black horses, probably in 1939 just before such demonstrations became purely decorative. The riders were wearing dark uniforms with a tall plume above their shiny helmets, and carried a staff held vertically with a pennant on top.

Our neighbour, Charles Flavell went off to war in the army, and his wife and son moved in with her parents not far away for the duration, subletting the house on Upper Edison. Stuart Terroux, one of the landlord family, disappeared into the military. My Dad was initially too old to join up, but as they raised the upper age limit in search of new recruits, he was exempted first because he had a family and later, when that reason was no longer valid, he was kept at home because his job in the phone company was an “essential service”. Other Dads in the area seemed to be in the same kind of boat for various reasons.

My Father kept a record of the naval ships sunk on both sides of the conflict, and the annual Victory Bond Drives produced elaborate military parades in downtown Montreal, and, on a much more modest scale, in St.Lambert.

The war caused rationing. Gasoline, which didn't affect us; and sugar, tea, coffee and meat, which did. Sugar was the only one that caused us a real problem. It came up in the late summer canning season, when sugar couldn't be found even if you had the coupons. The only way was to put a little aside out of each allowance for months beforehand. Gasoline was dispensed according to need. Doctors got a “D” which was virtually unlimited. “C”, “B” and “A” were based on varying degrees of need, while “AA” was for people with no commercial or service need. All you could do with it was drive into Montreal about twice a month. Many folk put their cars up on blocks for the duration.

In the early stages of the war Mother became a Civilian Protection Committee (CPC) officer. This meant she was issued an armband, a gas mask and flashlight. She patrolled the neighbourhood during practice blackouts to look for light leaks around windows that might tip off any lurking German bombers. My Father took endless First Aid lessons and practiced his splint and sling techniques on the family. We usually ended up in gales of laughter because he couldn't do it without tickling us. 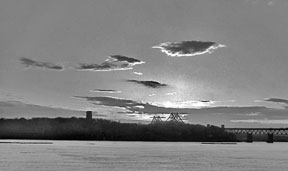 St. Helen's Island, in the St.Lawrence River just a half-mile off the St.Lambert shore, was used during the war to house German prisoners of war. Everyone was supposed to be on the lookout for escapees, and at least once there was one. I remember a big flurry of neighbourhood activity as children were herded indoors and police cars made extra stringent patrols. Any man in bedraggled work clothes displaying a thick German accent was highly suspicious and it didn't take long for him to be rounded up for questioning.

Did we ever hate the Germans! In our book there wasn't a good one to be had. Hitler was called Schickelgruber, der Fuhrer, the house painter, that evil man, and worse. We could all paint on a tiny moustache, drape our hair down over our forehead, and Heil (followed by a Bronx cheer) with the best of them. But it was all a mock. “Whistle while you work, Mussolini bought a shirt. Hitler wore it, Britain tore it, Whistle while you work.”

Yellow Harvard training planes from nearby St.Hubert airport were constantly buzzing our house. It was part of the Commonwealth Air Training scheme involving UK pilot trainees. From time to time my parents opened our home to lonely young men on leave. We had several visits from one Yorkshireman who was a character. He introduced us to the song "On Ilkley Moor b'a t'hat" (without a hat). The favourite line came after the hero of the song had developed a cold, died, was buried, and then, "T'worms will coom and ate thee oop, and then we shall have eaten thee."

The end of the war in Europe in May 1945 was cause for celebration. There were school thanksgiving services and then in the evening my Dad took me to downtown Montreal where the streets overflowed with people, no traffic moved and everyone hooted and hollered their joy at the end of hostilities. There was one lonely trolley car in front of Morgan's store on Ste. Catherine Street that was completely surrounded by revelers and not going anywhere. The trolley pole had been pulled off the wire of course. Anyone in uniform was an instant hero although most on the scene had probably spent the entire war in Canada. 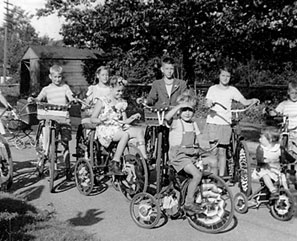 In St. Lambert we had a parade on our street featuring gaily decorated bicycles, trikes and baby strollers. The whole process was repeated when the “Japs” caved in after Hiroshima and Nagasaki. Within a few weeks after the war in Europe ended the aircrews started coming back from overseas flying their own bombers. The ones that had been issued to Canadians seemed to be mostly 4-engined Liberators, probably made in Canada to US design. There was also a smattering of twin-engined Mitchell B-26 bombers. They arrived in formation, circling over St.Lambert and waggling their wings while waiting their turn to land at St.Hubert. We waved enthusiastically. Next Month (St. Lambert High in the 1940's)