There are lots of memories wrapped up in the various deliveries made to our house. Every day except Sunday, the milkman from Elmhurst Dairy trundled his horse and wagon from Montreal West to St.Lambert by way of the mile and three-quarters Victoria Bridge, starting out at 4 am. The wagon was built with insulated boxes down both sides and a walkway between. Ice kept the milk from warming up too much. There was no roof. Not the greatest of working conditions but our milkman was invariably cheerful. I was fascinated with the leather pouch he carried at his waist with pockets for various kinds of coins and bills. He was not the brightest of individuals so he often held up a handful of change for his customer to pick out the right coins. I guess no one cheated him because he kept the run for years and years. We often bought Jersey milk because it came with a large layer of heavy cream at the top. My mom poured some of it off for other uses. In winter you had to be pretty prompt about bringing in the milk or else it would semi-freeze, pushing the cardboard cap up two of three inches above the bottle top. We often hitched rides up the street with the friendly milkman. I can't remember that we were much help, probably more of a nuisance.

One of the topics for discussion among us kids was “Who do you take from?”, it being rather important which of the purveyors of milk or bread served your house.

The bread man – POM Bakeries was our supplier – had a truck that permitted him to stand up while driving, if he wanted. This allowed quick exits to run up to customers' houses. Bread men seemed to always run. I remember one who was overweight; a little round man, who sweated buckets in the warm months as he ran from truck to house and back, maybe two or three times to get the desired products. The POM trucks were 1930 Fords with a big custom wooden body. POM stood for “Pride of Montreal”. The bakery was located just east of Westmount Station in Montreal and has long since been turned into expensive condos. The bread man had a large wooden tray with a handle on top that he kept filled with the most popular items. The smell when he opened the doors was tantalizing.

Our grocery store was the Stop & Shop in the “Village”, that is, in the shopping district, a three-block stretch of Victoria Avenue. Phone orders were accepted from the early days of telephones, and a Dodge “Thrift Stop & Shop” truck would deliver later in the day. The deliveryman brought the groceries right to the kitchen table and was paid on the spot.

Close to us, but over the tracks southward, was a French district called St.Maxime, the main street being St.Louis Street. There was a French butcher shop there that delivered using a small pony cart, managed by two boys. The pony trotted briskly as it made its rounds in the area.

The iceman had a horse and an open wagon. The ice was kept from melting excessively by keeping sawdust packed around it and covering the load with a heavy tarpaulin. But in the warm months the wagon left a trail of water behind it on the pavement. I guess that was an early form of “shrinkage”. The iceman washed the big block of ice before delivering it indoors, carrying it with impressive tongs. A block weighed 40 to 70 pounds. He kindly placed it right into the icebox. 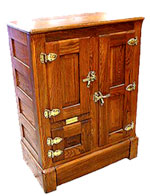 The oilman delivered fuel in a smallish oil truck for our so-called “jacket heater” (a small water heating stove used in the warm months when the furnace didn't do the job). Both the truck and the driver seemed to be coated liberally with oil. He had a big can, sort of like a milk can. It was filled from a spigot on the back of the truck and was carried inside to the tank on the stove in the basement. We called the oil ginger ale because it foamed as it ran into the can.

The big stores in the city; Eaton's, Morgan's, Ogilvy's and Dupuis Frères, all delivered to St.Lambert, whether it was store purchases or phone orders. Their distinctive trucks were extremely well maintained; you might say competitively polished. Eaton's had a policy of not advertising the truck manufacturer's name and therefore went to elaborate lengths to eradicate all chrome-plated identifiers. But they couldn't fool me because I knew all the makes and models by sight. 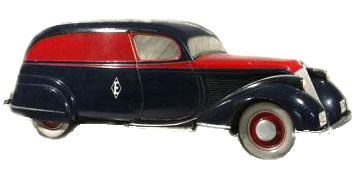 Troy Laundry and Dying Company came from Montreal a couple of times a week to pick up and deliver. The company sponsored a popular children's radio program called “Uncle Troy, the kiddies' answer man”. Its theme song began with a ditty, the first four notes of which were A, C, F, C. They had their truck rigged so that when the driver pressed the horn button, those four notes sounded. Housewives knew that the laundryman was in the area and got ready to meet him. It was an early form of integrated marketing.

Mr. Dion was the local painter and plasterer. It was interesting to see him slowly bicycling to his next project because he had to somehow carry all the paraphernalia for the job; including paint pots, stepladder, drop cloths, brushes, turpentine. He wore overalls that had been totally painted a hundred times. The final part of his bicycle juggling act was a pipe clenched between his teeth from which smoke trailed behind.