Seeing the photo in the September issue of the newsletter of the Class of 1959's trip to New York brought back a few recollections of my own.

Our class, 1958, was CCHS's first to have such a Senior Class trip. An American friend, who had attended our school for a couple of years before returning to Philadelphia wrote and told me of her school's plans for a Senior Class trip to New York City which was sort of an annual tradition there. At that time my perception was that US high schools had more fun (spawned no doubt by Hollywood movies) and wished we could do the same. Then I dared to think, “Why couldn't we?”. I shared the idea with some friends and they thought it would be a wonderful way to cap off our high school years. The next step was to sell the idea to the powers that be, namely, principal, Mr. E. Y. Templeton.

With the help of my dad, who worked for the CNR, I did the research as to mode of transportation, hotels, tours, cost, etc. for a Spring 3 day trip. Concluding that a Greyhound bus would be the most practical and economical choice, we calculated the cost per student based, of course, on a full busload. A couple of classmates, Carol Denard, Joan Gregory and I then approached Mr. Templeton with our plan. He was understandably dubious at first, perhaps imagining all the legal, professional and personal ramifications of wild students running amok in the “Big Apple”. After a few days of thinking it over and, I'm sure commiserating with others, he granted permission with a few conditions. Besides having the minimum number of participants, we needed parents' signed permission, at least two chaperones and the promise we would be on our best behaviour. If at any point there was trouble or mischief, the trip would be cancelled and we would immediately return home. Furthermore, the possibility of future school trips depended on the success of this one. And we were, after all, to be ambassadors of not only our school but our country. We assured him we appreciated his trust in us and would not betray it.

The next step was for us to present the plan to each of the eleventh grade classes and to encourage participation. Being rather shy, I hated to speak in front of groups, but my motivation outweighed my fear. It was a good exercise as it turned out as after that it became easier. For various reasons, we weren't able to get quite enough participants from the eleventh grade alone so we opened it up to the tenth as well and got what we needed.

Mr. Templeton and Mr. Roy Kennedy were our chaperones. I never had Mr. Kennedy as a teacher so knew him only by reputation which was that he was pretty strict and tough. I thought that might put a damper on the experience but was pleasantly surprised in getting to know him outside the school setting. We had a great time and he enjoyed the trip along with all of us. This we knew because he smiled a lot and even laughed. He later told us how impressed he was with us and our behaviour. 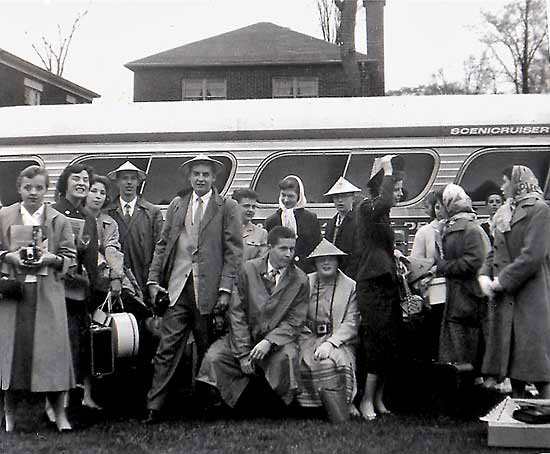 We were so excited when the day finally came and we lined up to board our bus. Sadly, I don't remember all who were there but those I do included, Carol Denard, Joan Gregory, Sandra Anderson, Brenda Lang, Barbara and Joanne Harvey, Barbara Jones, Susan Smith, Linda Cassidy, Roslyn Ryder, Penny Whalen, Wilma Gillespie, Marilyn Grosskurth, Tim Frizzell and Jim Innes. Someone, can't remember who, brought along an Emmett Kelly puppet/doll for amusement on the long but joyous ride. We marvelled at the NY skyline as we approached the city then settled into our hotel, the Shelton Towers, which boasted a swimming pool. We never had the occasion to use it as I don't think anyone thought of bringing a swimsuit. 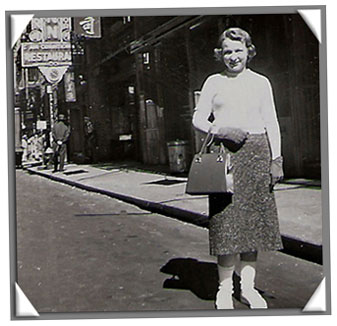 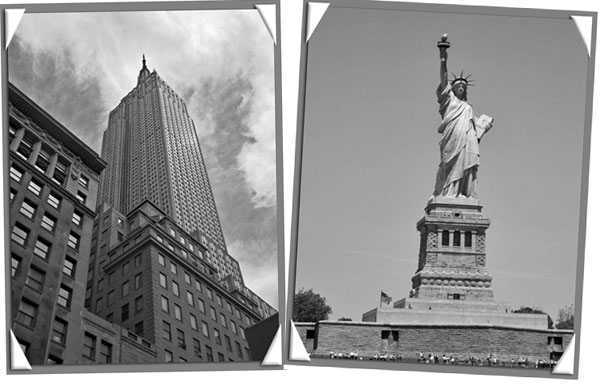 We saw many of the usual New York sights, the Empire State Building, Times Square, Rockefeller Center/Radio City Music Hall, Central Park, Chinatown etc. but I was especially impressed with our visit to the U.N. General Assembly which was quite an experience. We had a lot of laughs mimicking the New York accent. "Can ya gimme a quahtah for a cuppa cawhfee?" 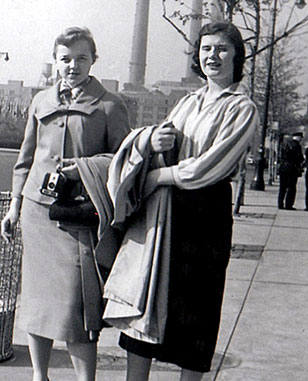 Our chaperones tested their trust in us as we were actually given quite a bit of leeway and freedom. On the last night some of us stayed up all night chatting and giggling, wanting to savour every minute. Then we headed out watch the glorious sunrise over the East River, a fitting end to our unforgettable journey.

The trip down on the bus had been rather boisterous with excitement but it was understandably a bit more subdued on our return as we quietly rehashed our impressions. We were pretty tired from our all-nighter. I do remember thinking we would be graduating soon and all of us would be going our separate ways. We had shared our high school years together and now we had this extra special never-to-be-forgotten event to put in our bank of memories to draw on in years to come. Now here we are, walking down that increasingly familiar memory lane.

The following are some remembrances of others who also took that trip:

What I remember was sitting around a hotel room with a bathtub full of pop (we were so innocent then) and whole bunch of kids sharing our stories and dreams. 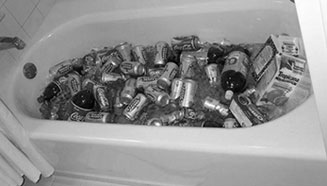 The amazing part of that was that Roy Kennedy and EYT, two of the most powerful individuals in our young lives, sat with us and shared in the discussions. 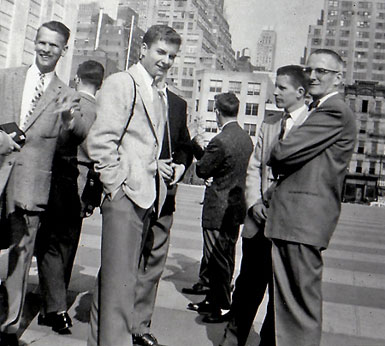 I also remember a bunch of us sneaking off to the UN to watch the sunrise over the East River and drawing the attention of a few of New York's finest (NYPD) who told us that it wasn't the safest place for a bunch of Canadian kids to be on their own in the middle of the night in 1958.

The trip was a 3 day adventure to New York City. How awe struck we were to see these huge buildings reaching endlessly into the sky. Our hotel was a modest one, quite suitable for a band of small town kids on a 3 day jaunt from Canada. We were able to fit in visits to Radio City Music Hall (and the Rockettes), the Empire State Building, Battery Park, Central Park and the United Nations General Assembly Hall. 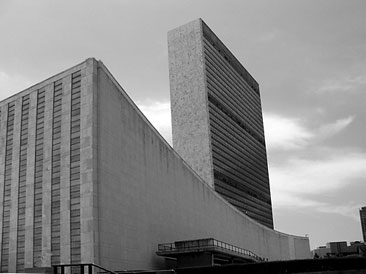 Roy Kennedy, our chaperone, complimented us upon our return from the UN saying he was proud of the way we conducted ourselves. Kennedy was not prone to giving out complements so we all knew this was a special accolade. 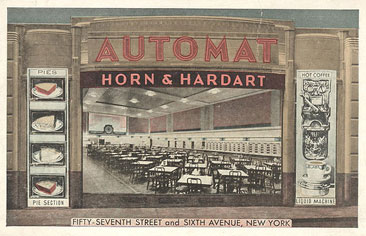 I was fascinated with the Automats that seemed to be on most street corners. For a few coins you could open a small door in a bank of a hundred doors and retrieve a sandwich or drink or even a dessert. I was thinking they had gone about as far as they could go, fast food for people living the fast life.

On the evening of the second night one of the girls and I decided to go dancing. I had heard of the Rose Bowl Dance Hall and wanted to try our style of dancing. Early evening we stepped away (we had time set aside to venture out) and took a taxi to the Rose Bowl. Once inside I bought my date a rose, and then we tried our dancing. The hall was an enormous circle with 3 band shells in the center which slowly rotated. Three types of music were played so you chose what you wished to dance to and slowly rotated along the floor opposite the music of choice. We chose the waltzing and soon discovered our style as not up to the Arthur Murray types. We stayed for a while and walked over to a Times Square where we had heard were less formal dance halls. We went up a set of stairs that promised great dancing. When a man in the ticket booth saw me with my date he took me aside to tell me that this was not a dance hall for us. He asked me where we were from. When I told him we were from Canada he said 'that explains it'. He whispered that this hall was for men who wanted dates. He did not know of any dance hall that would suit our purposes and that we should probably go back to our hotel, and that we did. I was beginning to think that life in New York City was quite different from life in St Lambert.

I remember that in May 1958 the hot new fashion was the "Sack Dress". We went to Gimbal's to check them out. 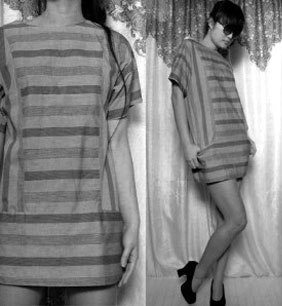 I also remember taking a chartered bus tour of New York and we thought the bus driver was a really cool, sarcastic New Yorker dude. I remember seeing Greenwich Village, and enjoying the foot-long hotdogs from Nathan's on Broadway.

I recall the subway being dirty and stinky. In our very high rooms in the hotel, it was amazing to look out the window and see the little people so far below.

I remember the Empire State Building. In the hotel room, I recall a bunch of us learned that if you stand in a doorway pressing the outside of your wrists into the opposing door jambs, then step out . . . tada! . . . your arms magically rise all by themselves. There was also something about swinging around then holding your breath to pass out. I may have that part confused because I haven't tried it since. And there was talk that taking aspirin with Coke would make you drunk. I think some brave souls tried it out.

We were surprised that the grouchy, terrifying Mr. Kennedy seemed quite human and pleasant on the trip.

In addition to what many others have recalled, I remember us travelling on the subway and wanting to go to Harlem. When we asked a policeman where Harlem was he asked where we were from and told us it was no place for white Canadians as it would not be safe and refused to tell us. So we missed seeing Harlem. 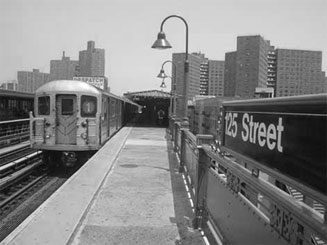