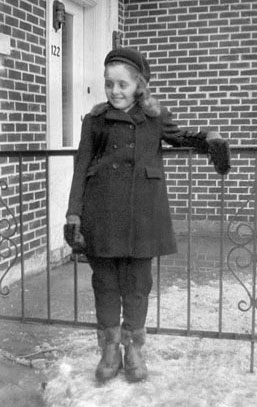 Photo on right taken in 1949, my mother used to buy coat "sets" for us with matching leggings.
Wendy Plumb (Irvine)

It's the winters that I remember most about St. Lambert. Now, that was winter! After moving to Toronto in '68 and not having to wear snow boots after January, it was quite a contrast from growing up in the Montreal area.

Before the advent of snowblowers, the plows would produce 10 to 12 ft. high drifts along the streets and sometimes we could not see the house across from ours. We kids used to walk along the top of those drifts, often losing our balance and sliding to the sidewalk. Or, did we even see the sidewalk? Were they plowed? I do remember building "forts" in that wall of snow.

We used to have coal dumped in through a basement window. There were always woollen mittens caked with snow drying by the furnace. Wet wool has an unmistakable smell—like having damp sheep in the basement.

Shovelling the driveway was a major undertaking. It was enough to give anyone a heart attack. Good way for enterprising young fellows to earn some money. No "home snowblowers".

I remember cars having chains on the tires. Was there ever bare pavement on the streets in the winter? If so, they must have played havoc with the road surface. Haven't seen chains since way back then.

When we lived on Lesperance and walked to Church on Mercille, my face and knees (I wore ribbed stockings) would be numb from the cold. And that was only a couple of blocks. Talk about bone-chilling! I guess the dampness from being so close to the river made it seem colder.

Our earliest neighbours would make a rink in their rather small yard. The skates were not that good and my ankles were almost touching the ice. Sleds and toboggans really got a good workout. Simple pleasures. Healthy ones. We'd stay outside until our toes lost feeling and our clothes were soaked. Then—hot chocolate!!

One winter my best friend, Pam, and I built a "snow house" in my back yard. It was sort of a semi-igloo. We even made a table and chairs of snow. I think we were about 10 at the time. That would make it 1950. Half a century ago!!

In grade 5, Miss Rebecca McIntrye (my favourite teacher) took a group of us students to a hockey game at the Forum. At least, I think it was a game. What a brave woman! I can still hear her cry out to the streetcar driver: "Let the children off". The tram was so packed. It's a wonder one of us wasn't left behind to ride the line to the end and back. No memory of the game. Just getting there and back was the big experience.

The kids across the street and I used to play "marbles" in the snow. We kept our "alleys" in those purple and gold bags that liquor (Crown Royal) used to come in. Where did we get those bags??

Building a snowman was a lot of fun. When the snow was of the right consistency, we could roll huge balls. That's one old-fashioned tradition that has never disappeared. I still see the odd carrot-nosed, scarf-wrapped, frosty figure here in Toronto.

Of course, Christmas was the highlight of the winter, especially for us Santa-believers. I wasn't able to contain my curiosity until the big day. I would go in my mother's cupboard when she wasn't home. After studying the exact position of the parcels, I would rummage through them and open the ones that appeared destined for me, then put everything back exactly as before. In retrospect, I spoiled my own fun for Christmas morning.

We always had a "tree", but I have no recollection of whence that tree came. Did the Lions Club sell them? The Boy Scouts? We strung popcorn and made paper chains. There were lights and decorations but no $25 (each) glass ornaments at 40% off. I actually fall victim to that "Sale" sign every year. Can't pass a Christmas Store without going in (in the middle of summer!).

There were always outdoor lights. One year we had blue (Ugh!) outlining our house. Red and green were always the true colours for decorations (at least for us traditionalists). I must confess--I'm now into white and gold.

It's funny how little things remain in your memory. One night walking home from the Astor Theatre (we could walk home alone at night in those days), there had been a fresh snowfall, and I was mesmerized by the sparkle produced by the streetlights. The snow appeared as millions of tiny diamonds. It was incredibly beautiful. I can still hear the crunch of the snow under my feet. It has to be really cold to make that sound.

In those days women wore genuine fur coats without the fear of being spray-painted green. In these "enlightened" days, faux fur is accepted and preferred by those with a concern for animal rights. Kinda miss my grandmother's grey lamb with matching hat. Both grandmothers had fox "collars", complete with beady eyes and a hinged jaw that grasped the tail. The little feet dangled. Loved those things.

When the moon is full, the snow takes on a bluish cast. The cold air makes the stars twinkle more intensely. It is a perfect time to go for a walk or a sleigh ride. Do people still go on sleigh rides?

Today, winter in the big city is not quite so lovely after the first 24 hours. Once the streets are salted, the little mounds left behind by the plows quickly become black and unsightly. We need lots of windshield fluid. I long to be somewhere where everything around me is pristine white.

My daughter and grandchildren have never experienced a winter like those of my childhood. Don't know if that's a good thing or not.

Global warming has probably made a difference in the winters already. It definitely will in the future.