To Love the Game 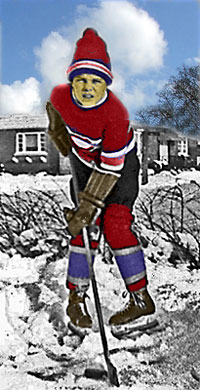 While a surprisingly large range of sports was offered in Chambly County schools and throughout St. Lambert community parks, the game of choice for most of my St. Lambert friends and I was without a doubt hockey – bolstered by the Montreal Canadiens, resident right across the river. We were all proud to wear the red, blue and white jersey with the big 'C', usually a welcome gift each Christmas, as we grew larger. Being pre-television days, our family huddled around the radio to hear Danny Gallivan call the action on Saturday nights, as a special treat, crunching and washing down Humpty Dumpty potato chips with Orange Crush. Then one winter weekend in 1953, the unimaginable happened.

Without any explanation of where we were going, my Dad and I travelled over the scary (narrow and open-grated) Victoria Bridge to the Montreal Forum. My Great Uncle, William Northey -- a prominent sports figure in Montreal and a builder of the Forum – was at the time the Executive Vice-President of the Canadiens. He maintained season tickets for select seats right behind the opposition goal (where most of the goals were scored). Can you imagine the impact on an impressionable 10-year-old, walking from a dark corridor into the dazzling bright Forum at ice level, with smiling, smartly dressed female ushers directing an unending flow of excited fans to their seats? I stood in complete awe, with my mouth wide open, in hockey's most-sacred shrine!

My Dad and I sat on the edge of our seats, watching Terry Sawchuck's every move, as he roughened the ice in his goal crease by sliding back and forth on his blades, and then crouched low to take warm-up shots. Gordie Howe, Ted Lindsay, and other familiar figures glided past, chatting to each other, only a few feet away. Then Dick Irvin's Canadiens hit the ice and a great roar burst from the crowd and rolled like thunder around and around the huge building. My heroes were too far away to make out more than their numbers on their jerseys, but still, my legs were in constant motion with excitement. The stirring National Anthem was sung in the two official languages, and then the game began.

Maurice Richard, Elmer Lach, Doug Harvey, Dickie Moore, Jean Beliveau, Butch Bouchard, and other team members set a grinding pace, from one end of the rink to the other, blocking the Detroit players advances and straining to find brilliant ways to score. With unbelievably fast reactions, rookie Jacques Plante (sans mask) kicked away pucks with his thick pads and snared lightning shots headed for the top corner. Most of the game remains a blur in my mind, but I still recall vividly the sharp crack of the puck hitting the glass in front of my face, the terrible thud of bodies colliding into each other or into the unforgiving boards, and fists flailing and pummelling unhelmeted heads during a fight – emotions ran high both on and off the ice in Montreal. The intensity of the match revealed the old rivalry between the Canadians and the Detroit Red Wings (who beat the Canadiens in last season's playoffs). Sitting so close to the back of the net, I immediately jumped to my feet each time the puck crossed the goal line; it seemed a long time (like in a dream) before the red light went on and the crowd reacted wildly. I was certain I saw the goals scored before anyone else in the Forum.

At intermission, Uncle Will brought us into the private dining area, to be seated near General Manager Frank J. Selke, Senator Hartland Molson, and other very serious-looking gentlemen. On occasion, Uncle Will hosted other VIPs, such as the youthful couple Princess Elizabeth and Prince Phillip. However, I was impressed mainly by the fancy, multi-layered sandwiches with the crusts cut off, the variety of desserts, and the sweet smell of coffee! 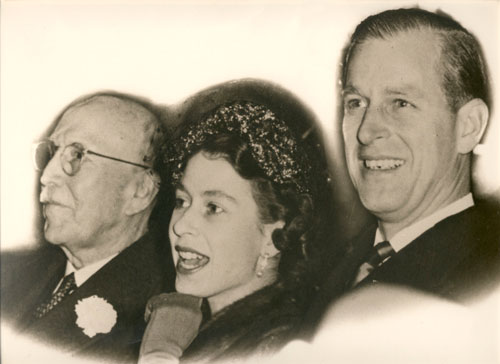 In the third period, I actually caught a deflected puck from the stick of 'Boom Boom' Geoffreon. To be truthful, the puck smacked painfully into the clutching hand of spectator seated in front of me, and dribbled into my lap! It was really my night! (My kids later lost the puck during a road-hockey game.) I was so exhausted from excitement by game's end that I have no recollection of going home. I am sure I eventually bored my pals by retelling the story. My Montreal Forum 'hockey high' lasted for years, ceasing only momentarily when, taking an occasional elbow to the face during a game, I had to ask my team members to stop playing and help me find the lenses of my broken glasses lying camouflaged somewhere on the ice. Application of a little hockey tape from my stick, and on with the game.

In case I ever doubted that this remarkable event really happened, I have my Uncle's beautiful silver cup inscribed: Club de Hockey Canadien Inc., W. Northey, Executive Vice-President. Stanley Cup Winners, Season 1952-53. A thick envelope holds his correspondence, hand-written notes, and typed drafts of his manuscripts; “The Origins and Development of Ice Hockey in Canada,” and “The Stanley Cup Record.” Among his many achievements, he is recognized for :

Uncle Will was a true innovator of the game of hockey, instigating the following:

It is now 54 years later, the Montreal Forum (now an entertainment center) is but a cherished memory for hockey fans, and all but a few of those larger-than-life players have passed on. Since expansion has created so many teams, and players are now traded as often as were our old hockey cards, I have found it difficult to maintain the old intensity of interest in the game. But come the playoffs each spring, the music of Hockey Night in Canada rekindles long-dormant instincts, and I just have to watch. I need no usher to find my seat in front of the television, nor chips and pop to munch. I marvel at the break-neck speed and passing abilities of today's players. It seems there will always be new stars and audiences to continue the tradition.

I still experience a tingle and goosebumps when I hit the ice on a Winnipeg rink, and run on my skates while circling around the back of the goal. I think of the Rocket's second effort and his wild stare, and then a few of my favourite scoring plays as a youth with my buddies at Lesperance Rink. Ah, growing up in St. Lambert: it was the best of times -- period.