Judy was born in Kingston, Ontario where her father, Neil, was a student at Queen’s University and her mother, Gladys, took care of them. The family moved quite often as her father was in the Navy, then involved with various industrial organizations including Union Carbide and later Northern Electric. Judy moved to Montreal (but not St. Lambert) when Neil was hired to work with Northern. Her interest in art began when she was very young as her grandfather was an artist and he encouraged her. Judy started attending classes at Beaux Art in Montreal starting when just 5 years old. When she was in Grade 6 they moved to St. Lambert.
While attending Chambly County High she played basketball, volleyball, did track and field, played tennis, badminton and used to sneak onto the golf course at the back of the school to practice putting. Judy won various academic prizes throughout her school years which mostly consisted of books, and at graduation time in 1958 she was awarded a scholarship to Mount Allison University, in Sackville, New Brunswick and earned a B.A. with a major in psychology and a minor in sociology. Following graduation Judy returned to St. Lambert and taught school in Chambly for a year to earn the money to attend grad-school. There, she won a scholarship to Queen’s University in Kingston, Ontario thus decided to apply her earnings to purchase her first automobile, a Teal, Renault convertible (“which regularly broke down, once in the middle of the Victoria Bridge”).

After receiving her Master’s Degree Judy married an engineer, Merv Palmer, from Queen’s, moved to Toronto and worked in educational research for the Toronto Board of Education. She began taking art courses at night at the Ontario College of Art. At the same time, she developed an interest in photography. Judy remembers realizing that an arts career could prove difficult financially, so she continued doing research, largely related to children with the North York Board of Education and the Ontario Government. In the mid-seventies she then branched out into human rights work, firstly in Affirmative Action for Women and subsequently with other groups.

Judy remembers realizing that an arts career could prove difficult financially, so she continued doing research, largely related to children with the North York Board of Education and the Ontario Government. In the mid-seventies she then branched out into human rights work, firstly in Affirmative Action for Women and subsequently with other groups.

After that Judy became involved in the private business sector, working for William Mercer as a consultant on human rights and compensation and organizational issues. She then departed with Mercers and moved to Ottawa to join Canada Post as National Director of Organizational Development. After several years there Judy returned to Toronto and established her own consulting practice in the mid-1980’s. She comments that “during all of this time I also continued to work on my art, while raising our two sons, Shane and Scott.
Judy feels she was fortunate to get some very interesting consulting assignments especially with the World Bank in Argentina, Peru and Mexico, but what she increasingly wanted to do was to focus on a career in art. So after almost 30-years as a consultant, she wound down her company and became a fulltime artist.

Her photography and paintings have appeared in solo and group exhibitions and she remains involved with several arts organizations in Toronto as a Vice- President of the Arts and Letter Club of Toronto, and is the Artist Representative on the Board of the Women’s Art Association of Canada. Most recently, one of her paintings has been shortlisted for the 2016 Summer Exhibition at the Royal Academy of Arts in London, England.

She attended St. Lambert Elementary on Green Avenue and recalls,

“My first day there I sat in front of the principal’s office with my mother and another student and her mother. That other student was Linda (Cassidy) Farmer who has been a lifelong friend. It was pretty easy to make friends and we all hung out in a group”.
“I also remember Mrs. Ferguson from grade school because she used to comment on the fact that her son was a famous musician who started out playing in a Salvation Army band. I thought she was exaggerating but later found out her son was Maynard Ferguson who was indeed a famous musician!”

The family lived on Brixton Avenue in a house that her Dad built and which..“still looks great.”

I started attending the new high school in 1954, and thought it was great going into a new building, just two blocks from our home.
I don’t recall having a favorite teacher and I was a pretty conscientious student. I did public speaking, modeled in the Eaton’s show, sang in a group at various events, and was active on the Student Council. Apparently I participated in a “rousing campaign for presidency of the Student Council” which was won by Carolyn Vance.
Our grad trip to New York City was a great success. I don’t recall seeing much of the chaperones so we were pretty much on our own a lot of the time, great for a group of 16 and 17 year olds in the 1950’s. A number of us got lost in who knows where…Harlem, Soho, Greenwich, etc. while on a quest to watch the sunrise over the East River.
Mr. Hume coached us in basketball and track and field both for the school and also the community. The girls’ team went to Toronto a couple of times and won the Canadian Juvenile and Junior Basketball Championships. That was exciting but one of the off-court events I recall was checking out the room at the Royal York Hotel where Buddy Hackett was playing. We couldn’t get in, the liquor laws being very stringent in the Ontario of the 50’s, so we stood and peered in through the doorway which must have been an odd sight for the regular clientele.
The school dances I recall as pretty classic for the time….boys on one side, girls on the other, and couples embracing on the floor and separating as chaperones circled. Sock hops, Sadie Hawkins, actual orchestras and small groups playing, MC’s from the Montreal radio stations. There were even square dances, which I doubt my grandkids would even know what those are, but we quite enjoyed them.
I recall the Variety Shows and our small group performing with Robert Parry’s rock n’ roll combo. I think one of the songs was “I’m Available”, a big hit in 1957. Pretty tame compared with the Rap and Hip-hop of today. The clothing of the day was pretty tame as well, long tartan dresses with collars! Very cool!

The painting is called: "Sunday on Main Street" and it is George Street (the main downtown retail thoroughfare in Peterborough, Ontario). The image, (which I observed and then photographed) struck me as representative of small Ontario towns and cities. The City of Peterborough just purchased a limited edition archival inkjet print of it for their offices. The original painting was done for Green Eyewear Optical and that is where it is hanging. 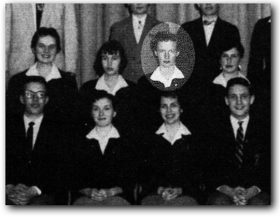 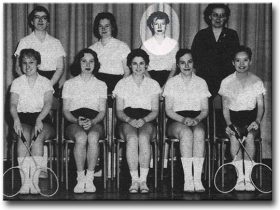 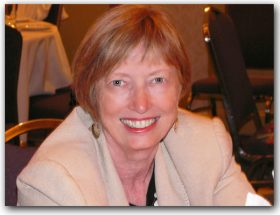 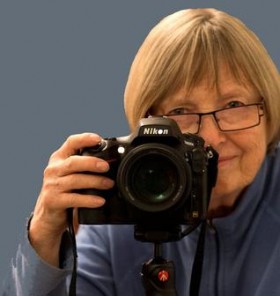 Visit Judith's website to view more of her work